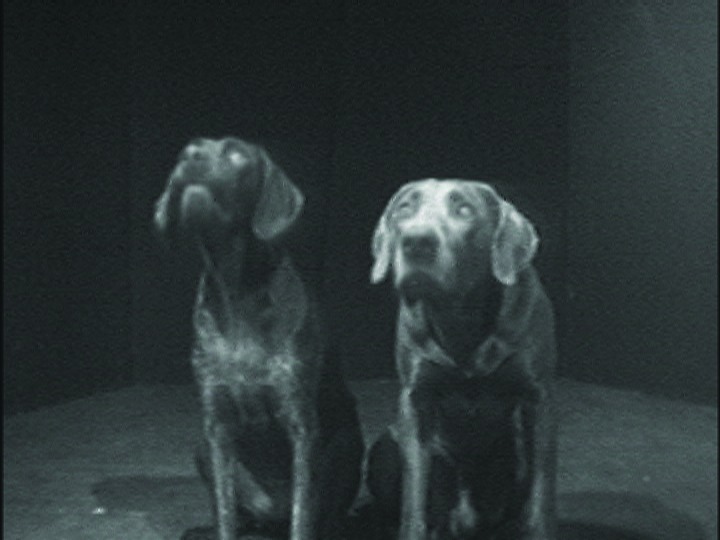 We have titled this programme Shooting Animals to highlight an affinity between good animal film makers and early hunters, both of which have to mutate in the course of their work into animals in order to follow their traces. The first film makes it clear that we are not about the real killing of animals as hunters perform it. In The Cameraman’s Revenge by Wladyslaw Starewicz dead animals are brought back to life. The rhinoceros beetle, the dragonfly and the grasshopper are real, dead insects animated by the play of film, regaining their life as fictional protagonists. In real life however, you unfortunately have to choose, and it is no easy choice. This is an especially difficult procedure for hunters, since individual animals of a species are never identical. As individuals they are part of a concrete world and thus cannot be generalized. Not every dog can bark and those who can do it often, indeed whenever they want to and not when the director or hunter wants them to. William Wegman shows this in his film Dog Duet. Two dogs, both Weimaraners, move next to each other in very different, not to say opposite ways. With animals as with humans, a duet is a song with interjection and contradiction. In Wegman’s case, this becomes physically palpable for the observer, because he chooses two dogs of the same variety. Artavazd Peleshyan’s Obitateli (Inhabitants), made in the Soviet Union in 1970, is also physical cinema. Peleshyan’s film is a hymn to the movements of animals in herds, swarms and alone. Each animal, even the loners, seems to him a multitude to whom he feelingly wants to restore the right of expression with his images, editing and sound. The animals, the inhabitants, are real animals and not metaphors. He casts a glance from above onto the deers of the Siberian expanses that merge together into vast herds in the freezing cold winter. The herds of deer at the Amur River in Siberia are legendary to Russian anarchism. In Peter Kropotkin’s magnum opus, Gegenseitige Hilfe in der Tier- und Menschenwelt (Mutual Aid: A Factor of Evolution), they stand for the flowing of individualism and solitude into community for the sake of mutual protection.

Romuald Karmakar’s Esel mit Schnee (Donkey with Snow) adopts the opposite aesthetic position. Tranquil and immobile, the camera fixes its gaze on a donkey until it sees the camera and walks towards it. This too happens calmly. Eventually, a second donkey emerges into view at a far distance. At the same time, the first donkey is already moving away from the camera again. The donkeys remain merely what they are, i. e. donkeys.