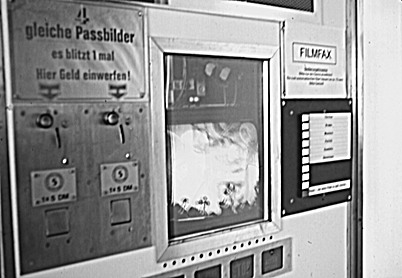 At the time of the first setting up in 1989 there were two movies. In 1993 there were already six movies. Aim of the project is to have around 25 film classics, respectively cult films of the last hundred years merging into a new, plastic image of movie history. To take away any emotional structure of images and narrative, every single film will be radically cut down to one and a half to two minutes of their original length and rendered in a dizzy storm of images, changing images more than twenty times a second. Fragments of the story and conversation are put together in a unique plastic collage of film, deprieved of any mystified allusion and instead endowed with a critical and ironic approach to form and content of the film itself and an allusion to the increasing “Fastfood” behaviour of the consumer of culture. Despite the almost violent alienation and destruction of the classic structure of film, respectively, the film itself will be recognizable to the viewer and even a new distanced point of view is possible, containing the viewers chain of association and eventual recollection of the familiar original. Sitting in the chair of an aeroplane, the choice of the menu is left to the viewer: tragedy, comedy, thriller, western… To each film genre a fast ride on a roller coaster in video lines across the half images of the film stories.