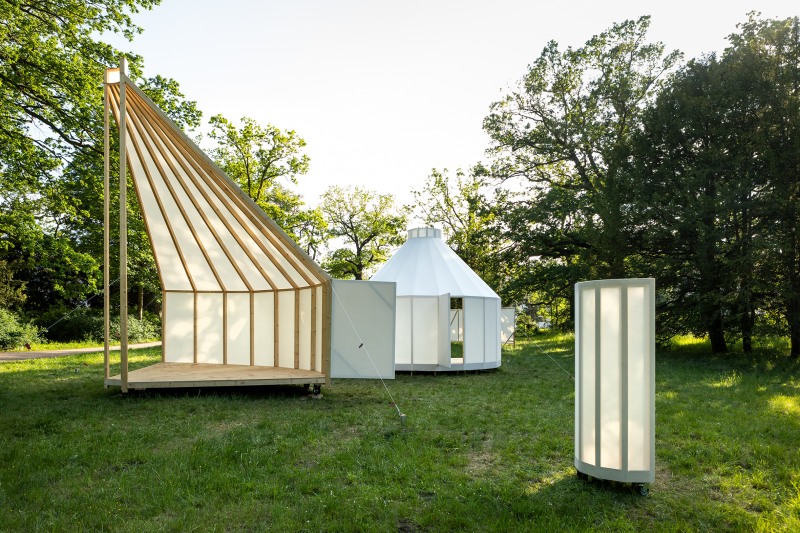 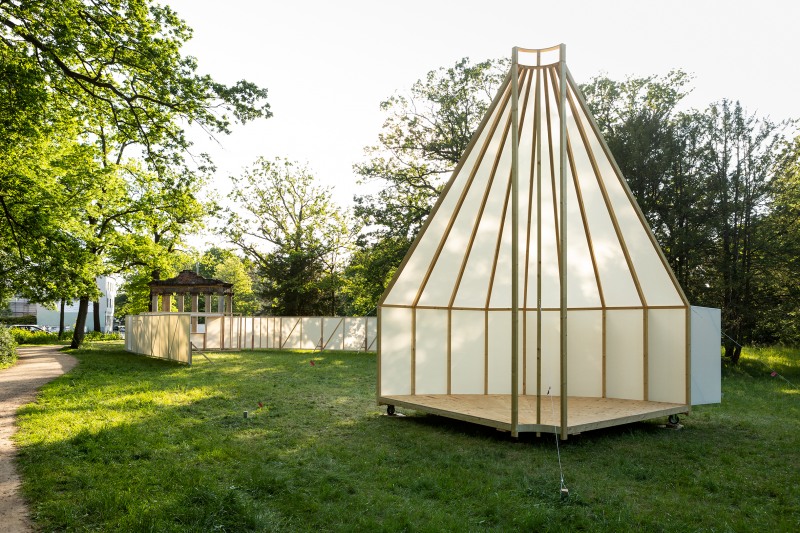 The large-scale installation Zip Zap Circus School by Ângela Ferreira, a canvas-covered wooden construction on wheels, has been erected in the Georgengarten along the same visual axis as a replica of Mies van der Rohe’s refreshment kiosk. Opposite the 18th-century Roman ruins, the full-scale model of the Zip Zap Circus School takes its cue from the full-scale model of the modernist kiosk. Referencing the historical project designs of Mies van der Rohe and Pancho Guede, the work touches the raw nerve of the colonial legacy of modern architecture, as modern visions for residential construction, urban development and social models were often first tested out in European colonies before being implemented at home. In this way, optimistic modern architecture bolstered by democratic ideals became an aesthetic of oppression. It is also the reason why the artist, who grew up in the former Portuguese colony of Mozambique, describes her work as an archaeology of colonialism.

AK: Zip Zap Circus School – the work you are going to install in our exhibition – consists of a model of a building never realized. It is based on plans developed in 1995 by your Portuguese-Mozambican-South African compatriot and architect Pancho Guedes. And it is inspired by the model of yet another unbuilt architecture, the last Bauhaus director Mies van der Rohe’s 1:1 scale model of a country house for the Dutch collector couple Kröller-Müller from 1912. In our email exchange you indicated a utopian dimension of the non-realized architecture. Where do you locate the utopian dimension’s encounter with reality?

ÂF: When you first mentioned the title of your exhibition Model and Ruin I immediately thought of Zip Zap Circus School. It is a cloth and wood model of a building that was never built. And, at the same time, as it is always destroyed at the end of an exhibition, it is also a ruin. It has no permanent manifestation, it remains a projected utopia that materializes every now and again in order to remind us of several issues. Its meaning is further propelled by the fact that the structure in itself is large and very visual, and yet it is by nature ephemeral, its materials are transparent and perishable. And further it is a huge structure on wheels, so it has no permanent address, it always points to being moved in the landscape or to being transported or transferred somewhere else. This is the first time that the structure will engage with its inspiration coming from Mies van der Rohe and the vast modernist tradition. Mies’ failure to build his design for Kröller-Müller reminds us that not all architectural projects get built. But the privilege of building a large 1:1 scale model is unique to the rich continent of Europe. That African project on the other hand was all about a building that was needed and desired but could not be achieved for lack of funding. It is the tension between these two utopias that interests me in rebuilding Zip Zap Circus School in Dessau. It will be an unusual situation where Mies’ failure is faced with Pancho’s failure and hopefully will make us think about utopia in a more complex way.

AK: Why a circus school? How do you translate the intended use of Guedes’ building design into your artistic interpretation of it?

ÂF: What interested me originally about the circus school was the fact that, at the time, it was an NGO created to help remove children from the streets in Cape Town. I liked the idea that one could engage the children in a constructive way, through informal education, and yet they were learning something they loved and enjoyed. In fact, I learned about the ZZ circus school before I knew about Pancho Guedes’ project. But originally I had no plans to work with it. It was only when I realized that the founders of the school, Brent van Rensburg and Laurence Esteve, had been trying to find more permanent lodgings for the school that my interest started. In an attempt to find support for acquiring a piece of land to build a new building they had asked Pancho Guedes to design a possible future school. When I came to know the drawings it had turned out that Brent and Laurence had not been able to find support and so the set of architectural plans stood as a symbol of an unachieved project’s wishful thinking. My first rendition of the project in Lisbon was in fact done in collaboration with Pancho for an exhibition called More works about buildings and food. It was a sculptural way to make real the dream of architecture.

AK: You have shown variations of the Zip Zap Circus School project in various locations around the world, like in Cape Town, in Lisbon or in Chicago. But in Dessau, it will be the first time that you have the opportunity to show it in a park. The sketch for the Kröller-Müller country house by Mies van der Rohe, who inspired both Pancho Guedes and you, was also designed for a park. What relationship do you have towards the (European?) notion of landscape and landscaping?

ÂF: Two things attracted me to the story of Mies van der Rohe’s model of the Kröller-Müller museum : On the one hand I always believed that the owners had allowed for the model to be built as a compensation for not choosing Mies’ design for their museum/house; and on the other hand I was intrigued by the wheels attached to it in order to be able to move it around and look for the ideal spot in the landscape. I, of course, chose to interpret the wheels for their more metaphoric value. I saw them adding to the idea of a building that was roaming, that had no place to settle. It made sense with the starting point of my project which was about a building that was wished for but that didn’t exist, a building that was desired but had failed to materialize. The photograph of the Mies van der Rohe building is quite unique because it looks like a real building, but in fact it’s just a life-size model.

Now the issue of landscape in my project is a little different, for example in Cape Town when we looked for a place to position the Zip Zap Circus School structure in 2002, we decided that a good symbolic spot would be the place where the first circus in Cape Town had been located. Luckily this is situated in a particular part of the city that was long kept vacant and undeveloped and was inhabited by unfinished highways. The evocative quality of the derelict urban space and the unfinished highway structures helped with a meaning of the sculpture as an urban intervention. Now in Dessau, I was lucky that this unique little milk bar building that Mies designed is just next door to the Georgengarten where we are doing our project, and so by reproducing the building, in canvas and wood and on wheels, as a mirror image to the real building, I will bring it into the Zip Zap project discussion and make the original Mies reference an integral part of the work. This way I am also hoping to bring the discourse of Modernist architecture directly to the discussion about modernism in Africa and the way it was appropriated by colonial regimes.

AK: You were born and spent parts of your childhood in Mozambique. Then you moved to Portugal and later to South Africa, were you studied art. What are your motivations to work with and through modernist esthetics and doctrines?

ÂF: When I was born, Mozambique was still a colonized territory. So I suppose we could say that I was a colonial child. Now, as you may know most countries with colonial projects invested a great deal in infrastructure after the Second World War. The colonial powers believed they could secure the occupation of those territories for a longer time if they physically marked their presence on the territories. A lot of construction happened at the time when I was born and growing up in Maputo. Most of this construction was modernist architecture. In some cases, the buildings were outstanding examples of modernist experimentation in architecture. They were light, they were innovative and adventurous. So the kind of spatial experience that modernism affords a human being was what I experienced mostly as a child, this is where I cut my own spatial teeth.

Now, when I started learning about the history of architecture and understanding where the architectural language of modernism came from I had to learn a whole lot of new things. Firstly, that it was a movement that was begun in Europe, particularly in Germany and in Holland. Secondly, that it was the movement that aimed to achieve a better quality of life, provide better health conditions and generally facilitate the emancipation of a new world. I suppose we could say there was a kind of democratic intentionality in the original modernist project. But things got complicated for me as an African child when I started perceiving the fact that this architectural language had been appropriated by colonial discourse. And as I discovered more and more problems with colonialism, as I started taking positions against it, I was faced with the difficulty of having to understand how was it possible that modernism, having started as a progressive idea, became appropriated by an evil political system. Most of my work has been about trying to untangle this mystery. It’s my complex relationship to something that I both admire and hate that is always present in my practice – an archeology of colonialism.