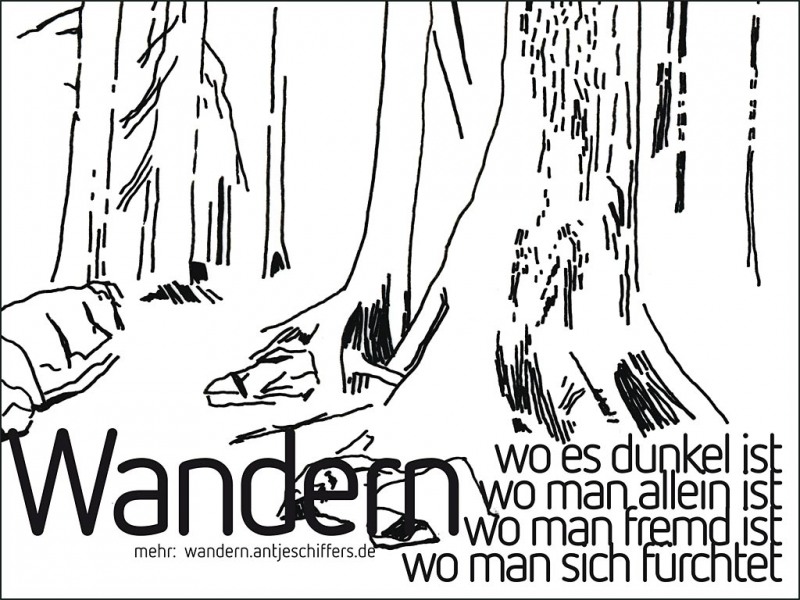 “Fear of being a stranger, of embarrassing situations or of asking for help; fear of being alone in the woods, fear of getting lost or spending the night without a shelter” are some moments that a person journeying on foot might experience. In three different locations, Antje Schiffers and Thomas Sprenger (Berlin) turn local experts into tour guides of fear, in order to teach people – during a hike lasting several days – who are unfamiliar with the location how to be frightened.

Once upon a time there was an area of middle Europe called Saxony-Anhalt that was full of life, industry and culture. People could be heard singing and dancing for miles around to the background rhythm of familiar factory sounds. As time passed from the 20th to the 21st century, however life began to change for the inhabitants of this land as their industry and with it their singing and dancing slowly disappeared. Violence, fighting and territorial disputes went on to shake the people with hatred and fear and together with the dramatic changes in climate, our ancestors in Northern and Middle Europe were forced to migrate south towards Africa and east towards Asia.

Little remains of the history of this area but what we do have has become the stuff of legend – the stories of three intrepid explorers from the early 21st century, past down through generations and still being talked of today. Our accidental heroes were not typical explorers in the vain of Scott or Polo. Instead, we take our knowledge of this time from an actress, a business consultant and a social worker (common job descriptions of the day).

Writing this over 400 years after our everyday explorers set off, the reader should note the pitfalls of trying to unearth historical facts using folklore as source material. All the contemporary historian has to go on are fragments of texts and maps and the oral accounts past on through the generations. The stories we tell now of these adventurers may not be recognizable to those who originally walked those dreaded routes.

My purpose here is to inform the reader what little evidence we have of these sagas that still permeate our consciousness even now; that children re-enact in their games and that continue to influence artists, playrights and musicians of our day. While these pieces of evidence are adding to the jigsaw, we are still unsure as to the overall picture we have created of this long lost society. What does seem to be emerging is a terrifying image; one that emerges from the stories we continue to tell.

We now know our heroes seem to have been following certain routes that others had planned for them. And that these routes were purposefully devised so as to induce fear in the subjects chosen to walk them. We know they walked the routes alone, that they lasted two to three days and that they were not from the areas they were trekking through. We even know some of the names of both the inventors of these routes and those who followed them: A local historian, Petr Mikšiček, for example, invented the route that took place around the German-Czech border that the business coach and consultant from Munich, Christian Jacobs endured in August 2010. We know that a group of activists working against racism and for a democratic society calling themselves ‘Miteinander e. V.’ conceived the hike in southern Saxony-Anhalt which a social worker from Wolfsburg named Harry Guta had his unforgettable experience navigating towards the end of July 2010. The inventor of the third adventure that the actress Julia Neuhaus made around the same time is to this day unknown, but Julia’s story still sits so vividly in our imaginations.

We even know from the remaining documents (now in the vaults of the Museum of Western Culture in Beijing) some of the motivations of these explorers to willingly embark on adventures that induced such fear. Maybe this was a common pastime back then – we know life was becoming desperate during this period and perhaps, absurdly, such an invitation to experience fear was something people queued up and paid for!

Some theories imply that these fear-walks were orchestrated by two central characters named Antje Schiffers and Thomas Sprenger and that it is their writing we read in the remaining fragments retrieved from old hard drives, but this we will perhaps never know. If so, it seems these orchestrators and translators must have been there to welcome the heroes as they returned from their terrifying adventures and heard their stories first hand, so vivid are the descriptions of these three very different encounters with fear.

Our understanding of life in this area during the early 21st century comes from our re-tellings of the adventures of these incongruous travelers. We get a rare glimpse of what was in the minds of this generation to make them so scared. They tell us not only what these individuals found frightening but also what society feared – and that can say so much about a civilisation and perhaps even cast some light on who we are today.