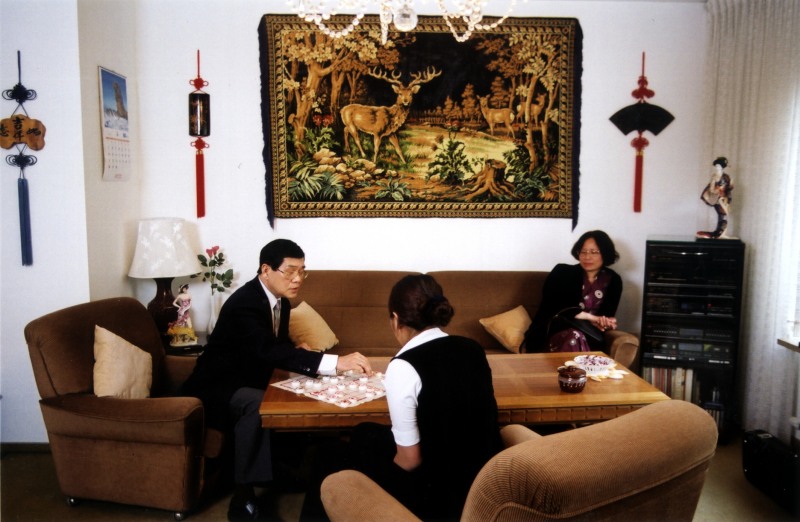 For a long time, the ethnographic gaze was always directed away from us – toward “the others,” whom we did not recognize as belonging to us. Most recently with “Petit á petit,” Jean Rouch has turned this gaze around and has revealed our own methodology. In the 80s and 90s, ethnography took a new course by turning its gaze inward and asking the question: what really defines “self ” and what is “the other,” and for whom? The video project “Unser Ausland” continues along this path. When people move between different cultures, the unity of the homogeneous “self ” breaks down, making room for new viewpoints that allow one to approach one’s own environment from the outside.
“People from almost every country in the world live in Berlin or visit the city for a few weeks, months, or years. Bringing their own particular
views, they make comparisons with the ways of life, culture, and manners that are more familiar to them. Many of them develop ethnographic
skills in this field because, just as in classical field research, they live right next door to the “natives.” In 1997, Dorothee Wenner wrote a column for the newspaper Die Zeit based on these observations. Twenty-six people from different countries, of varying ages, and professions, discussed their opinions – what they liked, and what they didn’t like. The response was extraordinary. Many non-German readers wrote long letters about their own experiences; the interviewees themselves were invited to go on talk shows, and several
European textbook publishers reprinted the texts for use in German lessons. The concept was further developed in an audiovisual
component created for a three-month traveling exhibition. In a complex video installation, foreigners living in Berlin describe the
peculiarities of Germans and German culture. They speak not from the point of view of “the other,” but as qualified experts on a special subject, or a particular profession. The Russian author Vladimir Kaminer, for example, examines German men and their relationship
to Russian women in the “Russian disco”; Burundian lawyer Jocelyn Ntikahavuye looks at the fashionably stylish life of budding lawyers on
campus; the Korean naturopath, Sui Eu Ok laments over the small size of German cemeteries; the French pop singer Françoise Cactus reports
on the problematic relationship Germans have with their hair; and the car mechanic, Augustine Tullah from Sierra Leone, continues to be astonished by how widespread “car disease” is. For the Werkleitz Biennial, excerpts from the ten short films will be screened as a preview.