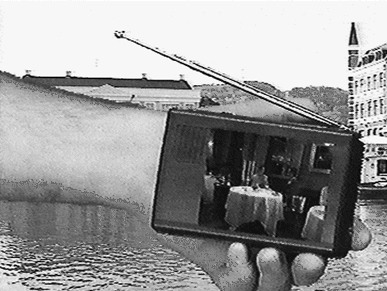 „Déjà-vu” speaks of virtual tourism in Japan, based on the idea of being somewhere else without ever leaving one’s homeland. This one-hour documentary presents Japan as a world fabricator of déjà-vu future, exploring the characteristics and directions emergent in this era of cultural experience through both the familiar European, and contrasting Japanese models. Shot in marriage halls, museums, temples and sects, love hotels and theme parks all over Japan. This is the new Japan, where everything is different from what you see, as long as it manages to evoke a sense of recognition. Fiction is reality, reality is fiction.

„DéjàVu” is the last part in the Travelogues video series, directed by Stefaan Decostere. This ultimate hallucination of an artistic ambition, which deals with mass-media, is a disturbing film. Its message is that in the future it will no longer be the interventions and intentions of the intellectuals and artists, but rather the reflexes and schemes of commerce and tourism that will determine the nature of cultural institutions.