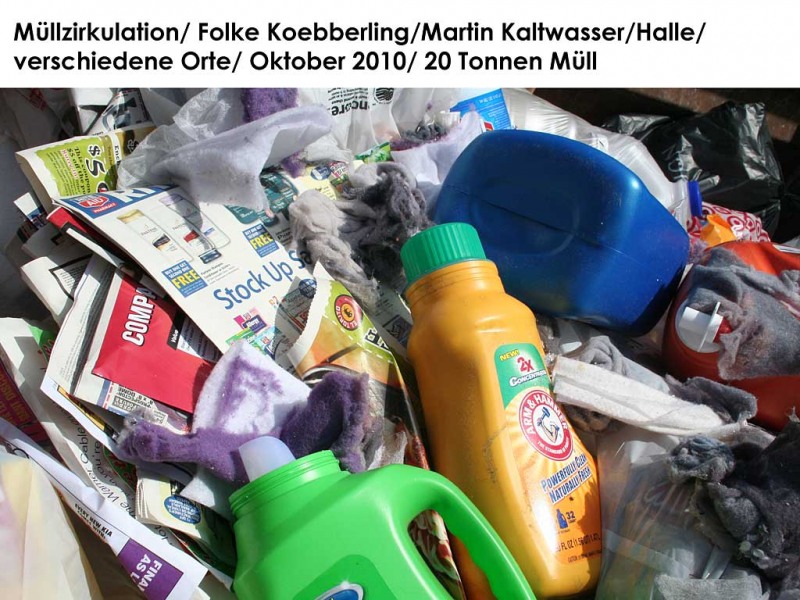 For a long time, Folke Köbberling & Martin Kaltwasser have been dedicated to the subject of recycling, which in the future must assume an ever-increasing importance.

“We originally wanted to place different arrangements of 1m × 1m × 1m garbage bales in downtown Hall during the Werkleitz Festival. Shortly before the exhibition, we got the message from the local waste company Tönsmeier that the Internet text of the festival, “Fear Has Big Eyes” it could not provide the promised 20 tons of garbage. They did not want to be associated with “fear”. Afterwards all waste companies within a radius of 300 km were contacted. 90% of the companies were networked with Tönsmeier. The remaining 10% wanted to lend us the garbage only for an exorbitant sum. In our further research, we came across more and more garbage scandals in the states of Saxony-Anhalt and Saxony.

Since we no longer received the garbage on short notice, we developed postcards and posters that draw attention to the content of the supposedly “clean” waste and show the connections between municipality and garbage scandals.”

Capitalism offers solutions for everything. The rate of profit is the driving force. For dirty businesses like garbage disposal, the profits seem to be particularly attractive. Especially if the difference between a legal and illegal disposal (i. e., even more environmentally hazardous because it entails merely dumping waste into the sea and similar procedures) 1 saves the garbage producer money and guarantees big profits for the disposer. These are the criminal scandals of an industry that also is no stranger to mafia structures. How should it be different. Garbage, whether toxic or household waste, is sent to landfills abroad, where poor states and ignorant and state-run administrations provide cheap waste to secure their own economies. Also in the Federal Republic of Germany, companies are active in this area. In order to be lucrative, appropriate quantities must be processed, which in turn are obtained from abroad. The same procedure takes place in the disposal of nuclear waste, which may be lucrative for those directly involved, but the population near the disposal sites is confronted with unimagined health risks and, for the respective country, with enormous follow-up costs in the future. Bazon Brock rightly speaks of “cathedrals of garbage whose unpredictable time horizon far surpasses those envisaged in historical places of worship. What are 1000 year old pyramids and cathedrals compared to final disposal domes whose cult objects have a half life of over 10,000 years? “2

Folke Köbberling & Martin Kaltwasser have come up with an impressive intervention on waste disposal and confront the population in Halle with garbage in urban space. The process of garbage production and transport, which remains hidden to the public, whether it’s at home or abroad, the artist duo make visible and lead it ad absurdum in a process developed for the Werkleitz project. Köbberling & Kaltwasser will professionally press out of the country’s garbage bales of up to 30 cubic meters volume with a respective weight of 400-750 kg and tie them with metal ribbons. Sometimes these bales are formed into garbage sculptures, sometimes placed as solitaires, to be dismantled the next day and to appear elsewhere in a new formation. The waste will consist of various types of waste such as plastics, cardboard and other types of garbage. (Text: Matthias Reichelt)