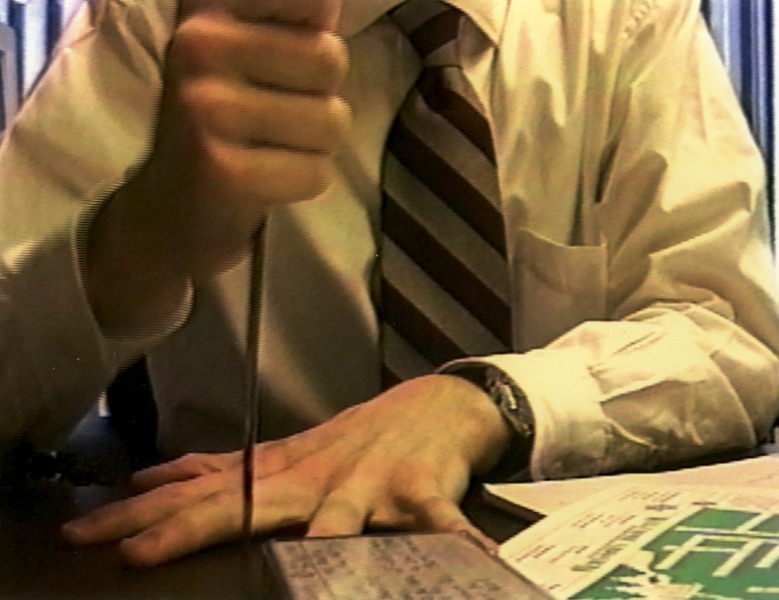 “The Target Shoots First” heralds a completely new genre, namely that of the industrial-homevideo-essay. Chris Wilcha, punk-rock-fan and recent graduate philosopher, was taken in 1993 by the mail-order music company Columbia House. The music industry was wrestling with Generation X, the alternative rock band Nirvana was incredibly popular. Wilcha, who had never expected his dedicated hobby would make him an expert with a major company, was pushed up the social ladder. His disgust at the capitalist mega-company made him decide to regard his personal transformation as an experiment. From the first day on, he recorded his experiences on the work floor on video. In the course of two years, he filmed all kinds of things, from the Christmas party, the summer picnic, lunches, meetings, office parties, to his own promotion from the thirteenth to the eleventh floor. „The Target Shoots First“ shows from the inside how Columbia House tried to incorporate an alternative youth culture and how Wilcha himself was not able to escape the company indoctrination: within two years he was producing an „alternative“ fanzine to promote the products of Columbia House. Wilcha shows in an often hilarious and always intelligent way the boundaries of the techno-democracy. In view of the limited enthusiasm of companies to publicise their marketing strategies, it is amazing that Wilcha was able to make the video.