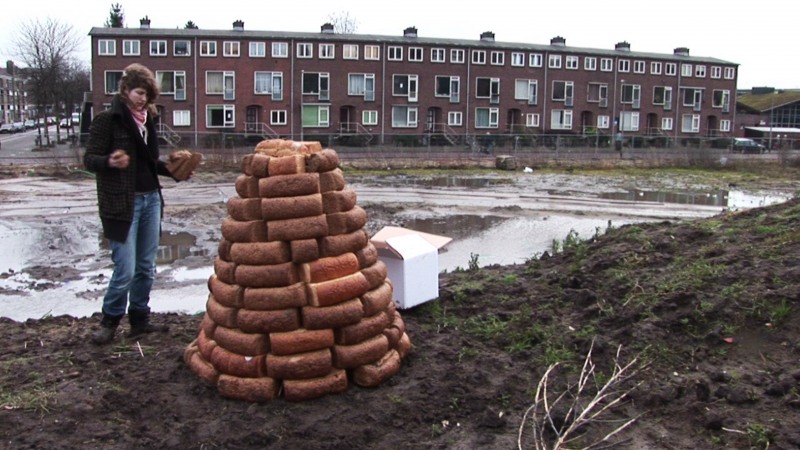 In 2008, Anna Molska (*1983) was the big surprise at the 5th Berlin Biennale, thanks to her two-channel video work, W=F*s(work) and P= W;t(power). At the time she was the youngest participant and actually still a student. In summer 2008, she graduated from the Academy of Fine Arts in Poland’s capital, Warsaw. During her studies Molska focused mainly on new media (video and audiovisual works), a subject taught under the supervision of the studio of Grzegorz Kowalski, an influential artist who has also taught a number of other well-known Polish artists, including Pawel Althamer, Artur Zmijewski and Katarzyna Kozyra. Grzegorz Kowalski calls his teaching method ‘Partnership Teaching’: a principle of teaching that considers social awareness and participation in the outside world to be features of art that are just as important as artistic expression itself. Kowalski sets his pupils the important task of making a choice: between practicing art within the safe, secluded environment of the art world and practicing art with a strong commitment to the outside world.

Molska’s video works often show a combination of both elements, as if she is in search of a middle path through the diverging functions of art. On the one hand, her involvement with the outside world is clearly visible in her work – in her images of working people, for instance – reflecting Molska’s interest in the image of people who complete a specific task by working together. On the other hand, Molska experiments with an avant-garde visual idiom by placing images in an alienating context or upside down, or by strongly zooming in on them. The result is a two-dimensional, abstract composition on film. The work of Anna Molska is unmistakably based on a visual idiom inherited from the twentieth-century avant-garde, in which the worker and the athlete play a leading role. However, it is unclear whether history is a tragedy or farce. The hardworking labourers featured in Molska’s video Work are a symbol of the communist ideal, while the supremacist planes of her alienated images are a direct reference to the young Soviet Union’s avant-garde. By juxtaposing these references, Molska often explores traces of the communist past in today’s Poland. In the two-channel video W=F*s(work) and P= W;t(power), we first see a squash court marked out in red lines on a white floor and white walls. (White and red are the colours of the Polish flag.) The white balls fall into the frame – one at a time or in groups – but we do not see the source of the power behind their movements. What we do see is the abstract pattern of the court’s red lines and triangles, interrupted by the irregularly dropping balls, which is vaguely reminiscent of an abstract constructivist composition. In the parallel screening, a muddy field appears in the frame. Workers unhurriedly erect a wobbly, iron structure in the grey slush of a dried-up pond. After throwing the structure together, which obviously they were ordered to do, they climb up the construction and introduce themselves to one another. The structure is a direct reference to the ‘human pyramid’ scaffoldings erected during communist marches and propaganda events. The work underlines the clandestine yet strongly embodied narrative of bravery, masculinity and power that the workers express. The pattern of obedience makes us think of how forms and patterns enforce particular individual and group behaviours, and thereby create commonalities and task-oriented communities.

Molska’s preference for documenting labour and people working together is also visible in the project for Impakt in Utrecht. However, this time, art students replace the labourers as the subject of the video work. During a period of one week, from 2nd–10th February 2009, Molska and her co-worker Krzysztof Franaszek documented activities carried out by students of the Utrecht Art Academy on a vacant plot of land.

When Impakt invited Anna Molska to visit Utrecht in the winter of 2008/2009, she proposed to make a work that would evolve during her stay in Utrecht, a work in which she could further explore her interest in group behaviour and directed/undirected behaviour. That seems an obvious starting point for a residency and yet, she was one of the first Impakt-EMARE residents to choose expressly to take the surroundings and the present moment as a guiding principle for the creation of a work. It is far more customary in new-media residencies, for an artist to sieze the opportunity to use technical facilities and the staff’s expertise in order to take an existing work to a higher level, carry out goal-oriented research, or do a final edit. Anna Molska chose an open, experimental trajectory. The video work that ultimately evolved from this plan has become a true Molska, with all the features that characterize her (still young) body of work. Many of her videos begin with a small, almost casual observation, in this case the daily view of a construction site in front of her residency accommodation. In the video we see an abandoned construction plot, bordered on one side by a residential block and on the other by a highway. It appears as though construction work has been stopped for a winter break – the puddles are covered with ice. A group of youths have taken possession of this piece of ground. Their actions are captured from a documentary perspective, with almost clumsy camera work, and range from the useful to the absurd. A boy makes soup and fries pancakes. A girl throws clothing onto the frozen puddles before hanging the clothes up to dry. Several activities take place with white balloons. Music is played and a hut constructed. And the community of seagulls is given bread. The camera observes everything with equal interest. At regular intervals a voiceover relates objective facts about the patch of land.

Franaszek – who was originally a performance artist – and Molska gave only minimal instructions to the group of art students. They had to be present for a certain period and act either individually or collectively. Many of their actions appear to be echoes of the everyday life that previously unfolded in the now demolished block of houses on this site. But who decides what is shown? The ‘actors’ devised all the actions; Molska and Franaszek only recorded what took place and collected images and sounds, preferably as ‘amateurishly’ as possible. And yet, the documentary aspect goes further than the fact that they take existing people and situations as the point of departure. This makes the video an interesting variation on the lessons in Kowalski’s studio, which made such a deep impression on Molska and other young artists, and which she has only recently finished attending. In Utrecht, Molska substituted participation – the construction of a situation in which the student has a great deal of control over what s/he learns – by the participants’ power over the work that she, the artist, ultimately makes. The students are aware of this, and also know that Molska and Franaszek will eventually share their actions with a larger public. This is why, outside their natural habitat of the studio, in the Dutch February cold, they accept their responsibility, and animate an empty plot of land by means of actions that are sometimes charming, sometimes illogical and always inspired. Because later, when the order is given to resume construction work, there will be time enough for regulated, responsible and (apparently) logical actions.

Parts of the text were written in cooperation with Impakt.