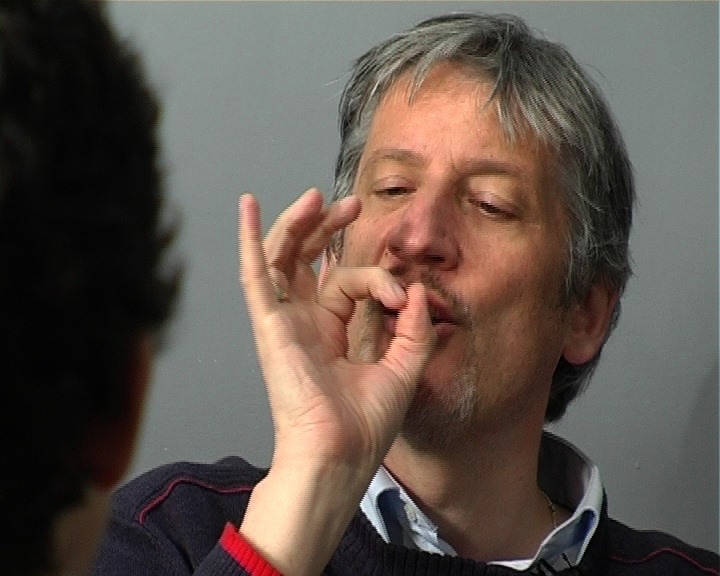 In her work Katarina Zdjelar addresses the complex of language and identity: How identity is constructed through language, speech and languages, and also how this educational process is influenced and regulated by social conditions, conventions and power relations. In her video work The Perfect Sound (2008) the camera observes a language coach and his student in a so-called ‘Accent Removal Training’, in which the individual creation of language – that accent which delivers information about the individual, social and geographical origin of the speaker – is to be extinguished in favor to adapt a class-codified norm.

When the image appears, at last, it has long become obvious: this is not a singing game, and certainly not child’s play. There are two men, sitting there. Opposite one another. Cut and counter-cut. The first image is of a mouth in close-up. A young mouth that nonetheless seems too old for the sounds, the syllables it is shaping: Ding. Ding, dong. This, memory prompts, was the name that Friedrich Fröbel gave to what he considered to be the First Gift for children: a ball hanging by a string, to be touched, seized, understood. This, memory prompts, is what children sing in nursery school: Frè-re Jac-ques, are you sleeping / dormez-vous, Brother John / Morning bells are ringing / Ding, dang, dong. This is, what the young mouth shapes. It tries to remain relaxed. Yet, it is totally focused, concentrated at the same time. Ding. Ding, dong.

Cut, counter-cut. Nevertheless: no dialogue. Two voices, yet only one of them speaks: Hold it. Stretch it. Meant is the mouth, the voice, the sound that is to be shaped, held, expressed. In the image – the second image – a hand says the same. It has its own manner of grasping and shaping a syllable, a sound. Sends it on its way. Then prepares to capture the echo.

Not child’s play. Not dialogue. But: sender and receiver. Recording and rendition. Lesson and repetition. An exercise. A drill. The roles of the two men are clearly defined: one, the older one, teaches. The other, younger one learns. To speak.

Thus the mouth cannot learn from an ear that does not hear. Deaf-mute: whoever is called thus is unable to hear. Rarely mute. And yet often remains so. Not speechless: language and languages can be learned. In written form. By lip-reading. From gestures. As sign language. Seeing, reading. Talking: hand-made.

But how to shape words whose sound one does not know? That one cannot hear as one says them? This sounds raw to those who can hear, sounds like groans and stammering to those for whom hearing is as natural as speaking. Unheard by deaf ears. Yet one can see it in the face of the others, who know – or think they know – how speaking and language are meant to sound. I understand the languages. I understand. I do not understand. I do not understand speaking. No dialogue. The mouth closes up. Dumbstruck. The hand speaks its own language. The others do not. No dialogue.

Learning to speak like the others speak: this is possible for a mouth, a voice, a person with deaf ears. To learn to shape words, with and from the language of hand and eye, of gesture, of face, of mouth. Invisible sculpture, made visible. After being shown and seen, the sculpture becomes invisible again. To hear what has never been heard. To read what has never been written. To say what has never been said. The mimetic faculty: not child’s play. An exercise. A drill.

The perfect sound: a million miles from groans and stammers. Pure form, in fact. Language, speech, speaking, voice as high art. But why then hum, vibrate, ding, dong?

Unlearn the act of speaking in order to learn to speak. Not child’s play indeed. Rather, exercise; drill. Precisely because it is a gradual process. Progress. Graduate. One can hear that. And see it, too. What unfolds – image by image, sound by sound, gesture by gesture – is a whole vocabulary. Every vowel, every consonant is formed by hands and lips. And every one of them is a lesson in itself. First listen. No image. Only sound. This is how the ear opens. Is all ears. Concentrates. It knows now what privilege is. Cut, counter-cut. The hand, the hands. The face, the mouth. Than the hands again. Invisible sculpture as visible form.

Ding, dong: Back to basics. An exercise. A drill. At the same time: a song. Image by image. Sound by sound. Invisible sculpture as visible form. At the same time however: a lesson in learning about the norm.

The perfect sound. Pan’s flute possessed it. And while he sighs, his ill success to find, / The tender canes were shaken by the wind / And breath’d a mournful air, unheard before / That much surprising Pan, yet pleas’d him more. / Admiring this new music, Thou, he said, / Who canst not be the partner of my bed, / At least shall be the comfort of my mind: / And often, often to my lips be joyn’d. Back to basics then, here too: the mimetic faculty. This perfect sound is also shaped by breath, gums, tongue and mouth. First, for love’s sake. Only a little later: in competition. For the perfect sound.

To speak of the latter implies that other sounds are less than perfect. But who might measure lack? Measure form? Pass judgement? Set the norm? The two men do not ask these questions. Here, all that counts is the word that is about to become: the perfect sound. All that counts is: to speak. To learn. To learn to speak. That which has never been said. No child’s play. A competition. An exercise. A drill.

Only the sound? Perhaps those who are able to hear the sound have already understood a great deal. Yet, one must see the perfect sound to understand.