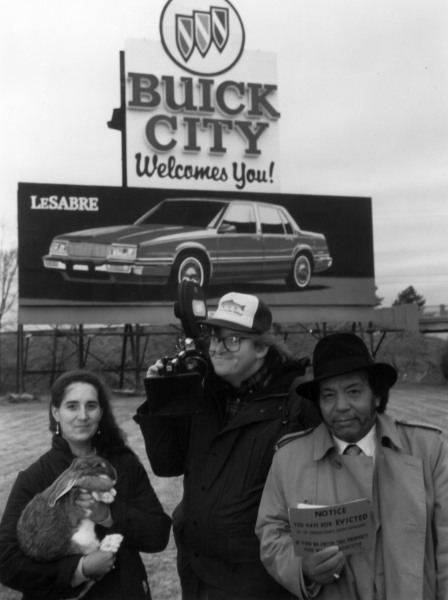 Mentioned in the title with his first name Roger is noone else but the Chairman of the General Motors board of directors, Roger B. Smith. Moore shows his futile attempts to get Smith to discuss the companies policy with him. He wants to spell out to him the impact of the mass discharges on the city of Flint. Flint is not just any production site: Since 1908 after Buick Motor Car Company merged into General Motors, it has been the birthplace of the trust. With the beginning of the eighties Flint’s development went continuously downwards. The trust’s management relocated a substantial share of the actual production to Mexico, taking advantage of cheap wages, dismissing 30.000 workers in Flint.

Moore succeeded to generate one of the rare cases in which a general problem is exemplified by example of a single, well-observed incident - the American Dream and its dark side. The determined optimism of the victimized and their efforts to cope with their fate are as engaging as they seem grotesque. Although its focus on the gravity of its motive is never quite lost, the movie demonstrates such a strong sense of humor that most of even its toughest critics couldn’t help laughing through most of its parts.