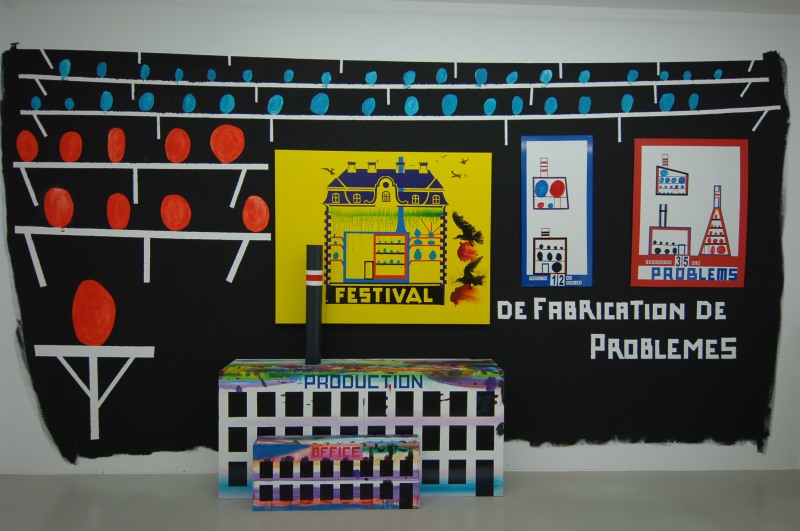 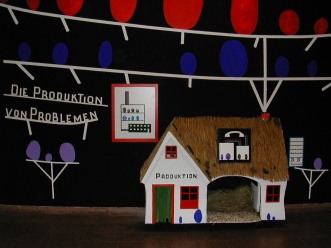 In the foyer of the Volkspark, the Danish artist John Kørner has painted and installed a 'problem factory'. Problem Factory is a wall painting depicting a festival of problems, as well as an efficient problem production office, both of which are painted inside the interior of serial storage shelves bending under a weighty line-up of problems. Kørner has developed a categorisation system for problems in his art – mainly the not well-defined 'how should I behave?' kind of problems for which there are only ambiguous, heuristic solutions, if any.6

To be more concrete, Kørner has a sign for 'problem' or for 'abstraction', namely the 'spot'. It reappears in most of his works, like in Man With 44 Problems and Problem Factory. For Kørner, a 'problem' can be a colour, therefore there are red, violet and yellow problems. There are old and new problems, which he joins together in his paintings, and calls, for example, A Modern Problem, referring to 'civilisation' and the problem of 'modern painting'. A museum building is a problem, as is a factory. The same is true for artillery, or even a sailor. The problems continuously evolve.

For Kørner, it has been important to find new ways to relate painting to the public. He is known for staging his paintings, which he also calls 'problems' in the public space, as a form of confrontational art, and as a sign of direct communication. Just as often, he creates stages in the exhibition space with and for paintings and audiences. For Happy Believers and its concern with belief systems, the Problem Factory can be seen as a local cosmogram, since the biennial constitutes an intersection between serial belief systems, in which, not surprisingly, their coexistence is also a constant negotiation and production of more problems.