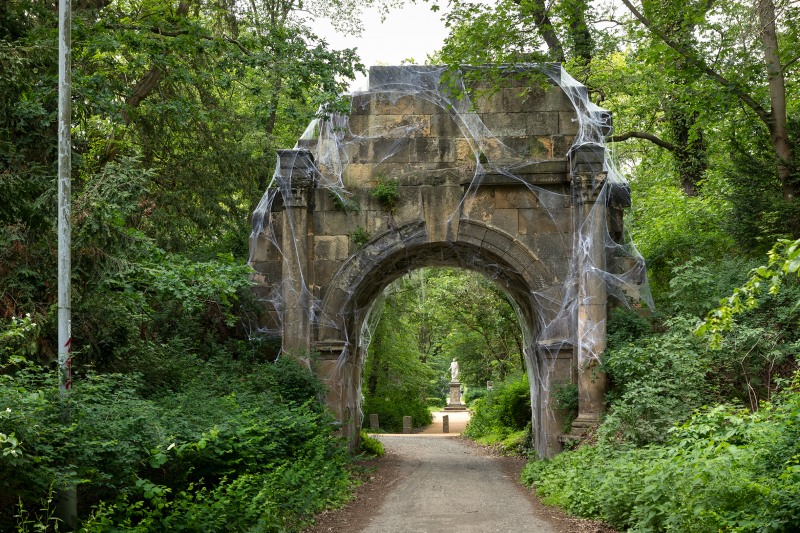 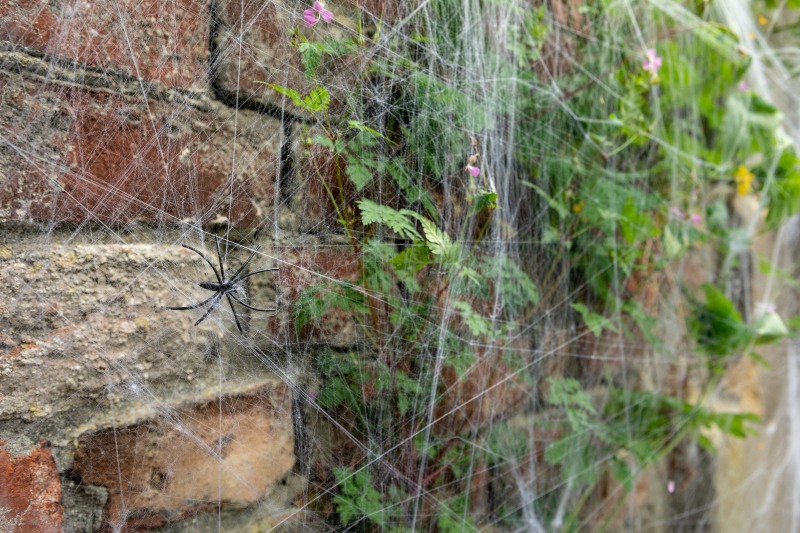 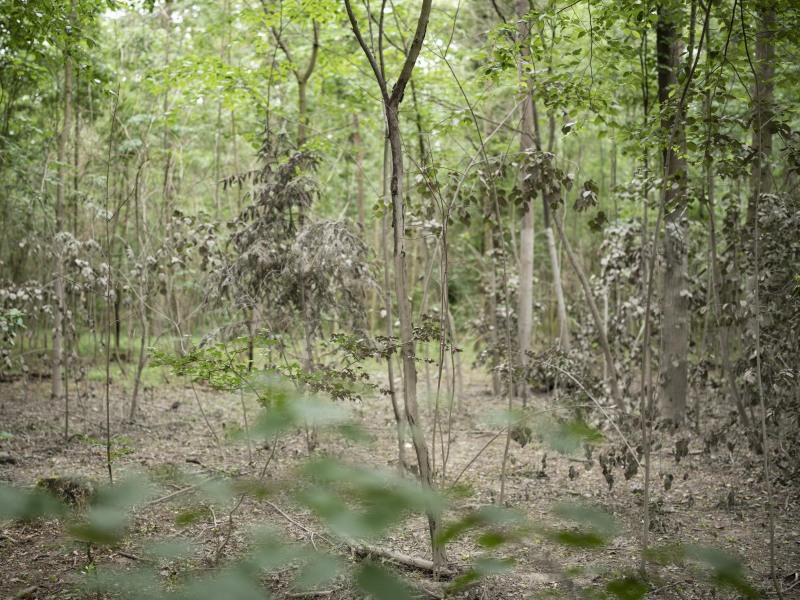 Time is the central theme for Nikolaus Gansterer’s works for the 2019 Werkleitz Festival. These works take up the idea that modernity marked the beginning of a new linear notion of time that was open to the past and future but that older notions of time continued to exist in parallel to this new one. By means of subtle, ephemeral interventions in the park, the artist explores potential forms of representation for these different concepts of time: wrack marks on tree trunks, oversized artificial spider webs under the ruins of a bridge and an acoustic event repeated at random intervals. The periodic, cyclical form of time in the realm of nature persists alongside Messianic notions that time progresses toward a clear end, as we find in Christianity. Added to these is the time of disaster – the definitive here and now of the event.

AK: In your drawings, room installations and performances you explore the relationship between thought and matter. You look at how images and explanations of things enter the world and attain a certain permanence there – the gradual fabrication of thought while speaking or (in your case) while drawing. Your focus is thus not so much models – one of the two main motifs of our exhibition – as it is the process of modelling or how something comes to be a model.

NG: In reality the two phenomena – thought and matter – can hardly be separated from each other. They are very tightly interwoven, in a permanent state of mutual exchange and interaction. Which is exactly why I’m interested in following the traces of thought processes; in observing thoughts as they manifest themselves, materialize, and – in a later stage – come to influence further thought and perception processes. Though I’d like to stretch the mundane concept of “thought” to also include sensations. One could describe this field of action as extended morphogenesis, by which I mean the artistic study of its continual assumption of forms. In the field of art focus is often placed on the result, the work, but the whole conceptual process and its relevance are paid little attention, or are to a certain extent overglorified. Yet it’s somehow enigmatic how ideas come about, or how they disappear again, isn’t it? And yet it is precisely these speculative moments of conception and rejection, of seeking and producing meaning that are so fascinating. The place where it happens, whatever that “it” is.

For me the practice of drawing plays an essential role in this respect, as an epistemic process of (self-)observation – especially because I take a relatively intuitive approach and am able to operate “in real time”. These notations and sketches function almost like a hypothesis that, similar to an auxiliary construction or (if you will) temporary micro-model, continually yields and facilitates further hypotheses. In this sense it is, like you say, a manner of modelling signs in order to leave traces of these signs behind and open oneself to autopoietic feedback or (to echo Donna Haraway) to the sympoietic ecology between thought and matter. Through drawing-like thought processes and as a result of thought-like drawing a condition of coming-into-being is yielded, of co-action and co-existence with one’s surroundings.

AK: For our exhibition you are planning interventionist installations of a graphic nature in the historical landscape of the Georgengarten, a garden park where numerous historical epochs have been consciously amalgamated. You’ve said that you find spider webs and high-water marks particularly interesting as symbols of by-gone ages and past events. What do you have in mind? What role did the question as to specific temporalities in the processes of “speculative conception and rejection” that you mention above play in your earlier works?

NG: In the last four years as part of the Choreo-graphic Figures research project I have been working intensively with an interdisciplinary team of artists, choreographers, writers, poets and philosophers on different manners of notating presences. From this a performative “Notation System of Now” has been developed. For the exhibition in Dessau I am thinking about different interventions in the park that invite visitors to question time constructions and that could be interpreted as visualizations of different time models. This links back to further questions: How does history come about, or how is it made?

The individual interventions are still in progress, but one idea is, for example, to cover one of the artificially constructed ruins in the park with artificial spider webs – as a kind of double over-layering of the past. Another idea is to paint trees in an area of the forest with paint sludge to render the illusion of a flood, making reference to a periodic, cyclical conception of the world, time and history. A glimpse into a world where time isn’t thought of linearly and progressively but as a continual cycle of recurring (cosmic) events. A third intervention will address kairos – a coincidental event, an opportune moment. Here time is conceived as a number of isolated, individual “present moments”.

AK: Your artistic work is based on a radical affirmation of the ephemeral, of that which passes by in time and that is only conceivable in a momentary gesture, a snapshot. How does this affect the perception of your own work? What will have remained of it when researchers in, let’s say, 200 years explore the relationship between models and reality in late modernity?

NG: Hard to say! Maybe my specific practice plays a role in rendering all these fluid micro-moments of realities more conceivable and graspable in their principle inconceivability so that in turn even broader contexts can be recognized? No, I think it would be presumptuous to think that! Whatever – one is always a child of one’s time. It may well be that in 200 years my manner of seeing and doing things seems absurd. On the other hand it could just as well be that in 400 years it were somehow to become relevant again – should anyone be left alive who is still interested in art or artistic production in our contemporary sense of the terms.