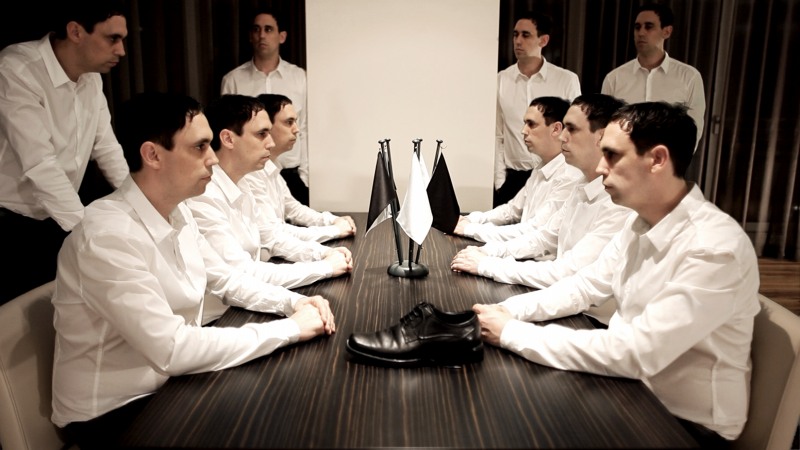 The program describes the fundamental confusion that arises from the endless number of doppelgängers, duplicates and derivatives, and in the process bridges the gap running between the first cinematographic animation techniques to an imaginary retirement home for disused cartoon characters. J. Stuart Blackton’s Princess Nicotine caused a sensation back in the day; people could not see enough of the fairy that was reduced in size with the help of a mirror. At the Shrink’s employs an extremely simple form of three-dimensionality earlier used in museums: Laurie Anderson projects her own self-portrait, analogue to the theory of projection known from psychology, onto a sculpture. The ten perfectly-made clones that Niklas Goldbach made of himself in Ten carry out a series of curious rituals involving symbols of political power. Real Snow White documents Pilvi Takala’s failed attempt to visit Disneyland Paris while dressed up as Snow White – the concern wants to maintain control over all copies of its own creation: “Only the real Snow White can dress like that.” For The Bohemian Rhapsody Project Ho Tzu Nyen carried out castings lasting two months and assembled his film from this material; we consequently see 21 actors all playing the same role. In Multiple Barbie Joe Gibbons gives therapy to a schizophrenic doll; the focus is on the question posed to all doppelgänger: “Do you feel that you are not real?” In David OReilly’s animation The External World, which has already won numerous awards, the harmless aesthetic of children’s films is transformed into a dystopian horror, whereby the following comforting text is inserted into the film: “Remember: this is merely a cartoon”.