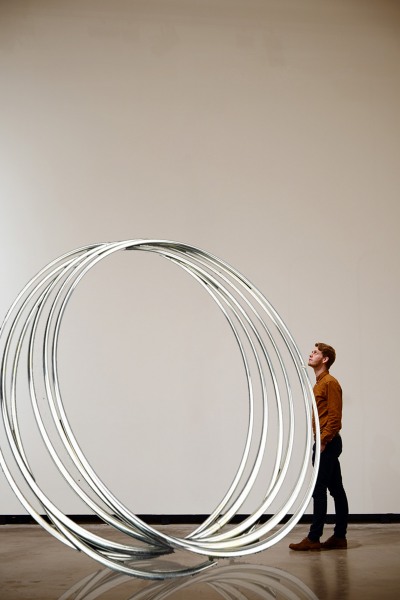 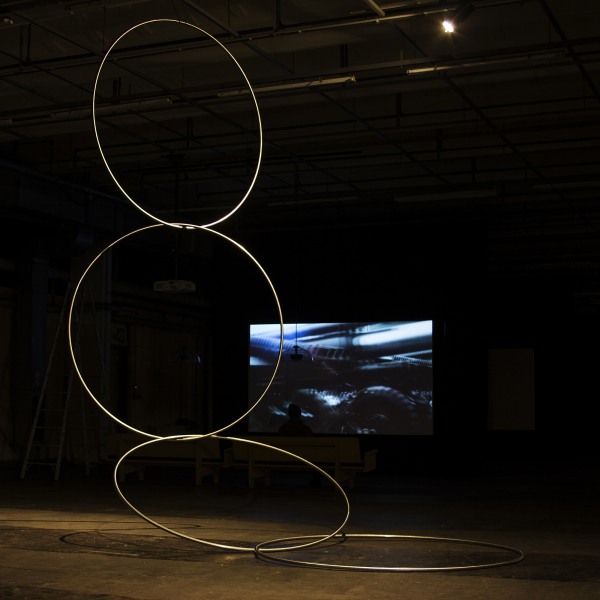 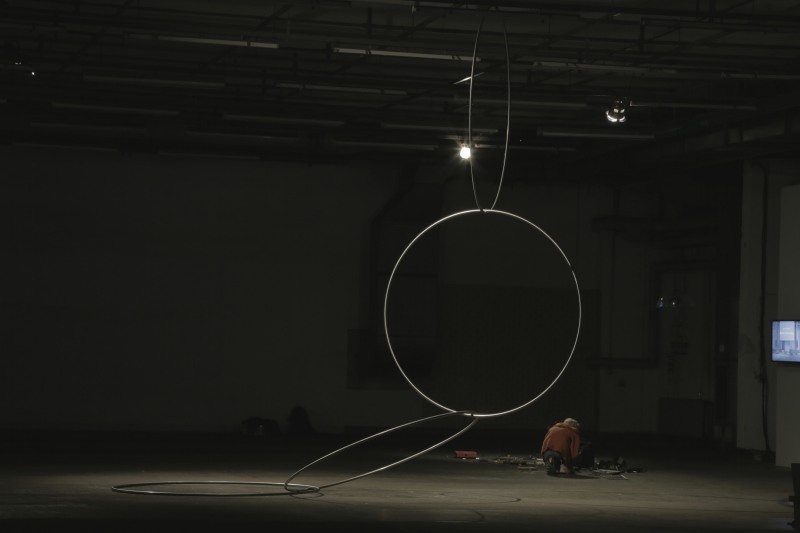 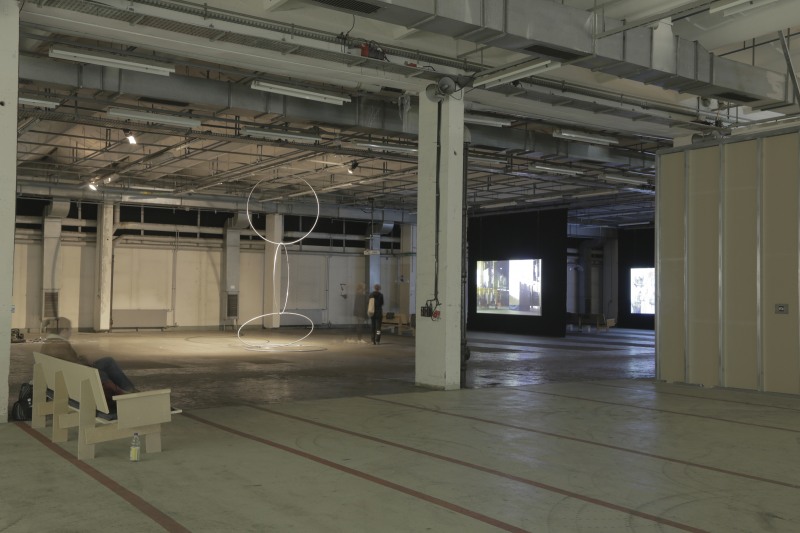 Nasan Tur works with a variety of media; photography, video, performance, intervention, object, sculpture and installation, examining in his work the constitution and structures of community and society. His work is focussed on relationality: relations between individuals, between individuals and their surroundings, between conventions and their transgression, between different cultures, between art and its spectator. Tur is concerned to isolate individual aspects of these relations, bringing to light what remains unspoken in them, or as he puts it, “making the invisible present and the non-present visible.” His investigations of processes of creating community and society centre around the concepts body and action, language and communication, trace and memory, illusion and manipulation. Basic components in his work are processuality, performance and interaction, where he himself is always the scene’s protagonist.

One recurrent motif is the relation between the body and its environment, between private and public. We see the artist in bathers in the middle of Berlin lying in a puddle and bathing (The Puddle and the Blue Sky, 2001). We see him performing somersaults on the floor of the terminal at Frankfurt airport, at an intersection in Tokyo, on Taksim Square in Istanbul and in Mexico City (Somersaulting Man, 2001–2004). Both performances are about divergence from expected behaviour, with which Tur provokes various reactions from observers involved into the action, initially unaware they are witnessing an artistic event. The reactions to his strange comportment vary from indifference, amazed laughter and head shaking, interested observation and curiosity and above all a sense of helplessness and uncertainty. In any case, the reactions are similar worldwide. There are obviously situations in which humans behave almost identically across cultures.

A key aspect of Tur’s work is viewer participation. Participants put into the position of experiencing themselves the tension between action and reaction. In Backpacks (2006) the artist provides a range of backpacks to be lent out and used in public space. Various utensils for different activities are attached to metal carrying frames. There is the cooking backpack, the fan backpack, the speaker backpack, the sabotage backpack, the demo backpack. Where and for whom to cook, what to sabotage, what to protest is left up to the users, who are merely provided with the opportunity of exiting their usual experiential frame. By exposing members of the public to this role-changing, the artist grants them participation in the work itself, before bringing it via the detour of individual experience and knowledge gaining processes back into the exhibition space, where the backpacks are returned and the films made by the users during their activities shown. Here they meet potential new users who expose them in turn to a renewed subjective experiential space.

Other works combine the aspect of participation with the question how language and communication are constituted and the relation between communication and understanding. Was ich euch schon immer sagen wollte (2006) consists of a microphone and speakers attached to the exhibition building and directed to the street. Visitors are free to use the system at will. When a visitor goes into action the separation is eliminated between inside and outside, art space and real world, anonymity and disposition. The speaker makes the decision to communicate with an unknown public while remaining within a zone apparently protected against immediate reactions by the art context.

City says… (2007–2011) also references language and public space. In this serial piece the artist collected graffiti at each exhibition location, selecting out the sprayer scene tags and concentrating instead on so-called message graffiti, containing a meaningful statement. In a performance the artist then sprayed the collected phrases consecutively on a wall, producing an impenetrable and illegible surface. The signs mutate into an image, in which the appellative character and the propositional function of the messages are lost. Figuratively, the abstract colour field stands for the loss of meaning and the difficulty of communication in general.

The language and effective force of political slogans enter into Tur’s work, as the deployment of perplexity in the neon piece Komunismus Soziallismus Kapietalismus (2008). The shift brought about by the minimal alteration of the spelling and the ironic word-play not only calls into question the propositional value of the terms. Also at work here is how these terms get used, which meanings they have in different systems and how these meanings change over time.

Many works of Nasan Tur explore the question of the function of memory in self-certainty, building identity and individual orientation in society. The work Like New (2007) consists of everyday artefacts, several pairs of polished men’s shoes in various sizes placed on black lacquered stands the size of shoeboxes. Tur had a street polisher polish the shoes to make them look new except for occasional marks of wear. The shoes are a physical embodiment of the former owners, evoking imaginings of their lives, character and social status and provoking us to rethink the relation between identity and difference. Good News (2009) consists of copies of a newspaper in piles in the exhibition space that visitors can take with them. They contain images found by the artist in various international newspapers and magazines from the last 35 years. They relate exclusively good news stories from politics, society, science and sport: the opening of the Olympic Games in Munich in 1972, the wedding of Lady Diana and Prince Charles in 1981, the withdrawal of Soviet troops from Afghanistan in 1988, the fall of the Berlin Wall in 1989, the release of Nelson Mandela after 27 years imprisonment in 1990, the release of Viagra onto the market in 1998, the fall of Sadam Hussein in 2003 and the election of Barack Obama as president of the USA in 2008. Leafing through the paper brings the events back to mind and the observer tries to remember his personal experiences of them, whether he took notice of them at all and with which feelings, reflecting in whether it affected him at the time, which hopes and expectations the images invoked and whether they have been fulfilled. The ten-part video installation Collective Notice (2009) recalls in turn a dark chapter in world history. It deals with persons from all over the world made to disappear as a result of their political activities in their home countries. Tur commissioned ten street artists to each draw a portrait from a photo of one of the disappeared persons, filming the drawing process. The exhibition situation simulates the draughtsmen’s workplace. The videos are shown on flat screens placed at an angle on an easel before which a stool is placed. Each film runs approximately an hour, with the image slowly materialising: time to find out about the subjects and their history, to take account of them and remember them. In their entirety the films take up about nine hours, making it practically impossible to take in the work as whole, just as it seems almost impossible to keep track of all disappeared persons.

Tur has also repeatedly dealt with the relation between production and value and the question of the role of truth and deceit therein, of illusion and manipulation. In the sculpture Nichts geht mehr / Rien ne va plus (2006) a roulette ball rolls and clicks unceasingly around the rotating track. The moment of decision fails to arrive: the ball does not come to rest on one of the numbers but keeps rebounding out. The ball becomes the symbol of the decisive moment in suspension, telling in its endless circling not only of profit and loss, hope and disappointment, but also of the processes determining life, of society’s norms and inner drives. In Variationen von Kapital (2013), the artist investigates the relations between work, mass production and artistic practice. The work refers to Marx’ Das Kapital and consists of 800 drawings arranged in a grid, each showing a divergent spelling of “Kapital”. The variations were chosen from 40,000 computer generated permutations and drawn by the artist in ink on hand-torn paper. The drawings are supplemented by four video pieces in which bankers in Frankfurt and Berlin pronounce the deviant spellings. The piece comments on the relations between mechanical and manual production as well as the crisis in the current economic system and the workforce partly responsible for perpetuating it.

Tur’s contribution to the Werkleitz Festival was curated by René Block. The sculpture Linking Rings (2013), conceived for Utopien vermeiden, is to be seen in the context of newer works, in which magic is a synonym for manipulation. A number of joined, polished metal rings hang from the ceiling and unfold over the floor. The artist quotes here the so-called magic rings of magicians, who create an illusion by separating and rejoining during their performances the seemingly solid, closed rings. The term “illusion”, derived from the Latin illūdere (to deceive, betray, mock, play) means the wrong interpretation of real sense perceptions or a euphemistic self-deception drawn from wishful thinking regarding a state of affairs whose reality is less positive than imagined. Linking Rings queries our perceptions and how they are manipulated and informed in the current socio-economic system with its artificial modes of communication.

Tur’s artistic strategies are chiefly aimed at setting processes in motion in which spontaneity and incalculability play a leading role. The artist inserts himself into everyday contexts and social practices, countermanding stagnant and standardised ways of seeing and thinking about the world and acting in it. He affords viewers the experience of their own presence, thereby opening up new ludic spaces of action and the chance to reconstitute their relations to the world.