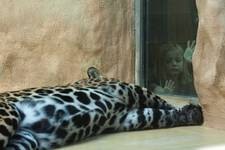 Students from the Fachgebiet für Zeitbasierte Künste at the Burg Giebichenstein University of Art and Design in Halle were invited by the Werkleitz Centre to work on various aspects of the zoo. The focus was on the architecture of the enclosures as well as on the behaviour of the visitors. Both the semiotics of animals and their concrete life histories in the zoo were subjected to examination. Our research was accompanied by an exploration of our own notions of nature. In the exhibition Jungtierbeute in the Halle Bergzoo [Mountain Zoo], the young artists show works referring specifically to the Zoo itself as well as circling around zoos in general as a point of crystallisation for cultural and societal developments. The artworks, comic and serious, at once evanescent and profound, incorporate themselves inconspicuously into the structure of the zoo.

The exhibition is accompanied by the programme 5 x 15 Minutes, in which artists from different fields give a short illumination of a work and its associated thematic.

Everybody is familiar with the signs in woods, instructing you to stay on the paths so as to avoid damaging the virgin natural environment and disturbing the free-roaming animals. The adventurer follows the path of the eyes. The aesthetic ideal of nature is made relative by the zoo and then the horizon shifts.
In harmony with nature – what touches the frontier of the authentic? How strange is the quotidian? The performative piece “Mimicry” approaches such questions by examining nature in the context of the zoo.
The camera operates as a corrective and observer to the performance.

“Pay attention to the barriers, they are there for your safety. Do not leave the paths. Do not climb over, sit on, or reach over the railings. Do not reach through the wire enclosures or aviaries.” – Visitor Instructions, Halle Zoo.
For this piece, green areas were stepped on, safety fences climbed over and paths were left. In this way, an usual look has been cast at Halle’s Mountain zoo. From the point of view of the animals, the situation in front of the enclosure becomes an object of observation.
Discover Germany’s most attractive mountain zoo from a new perspective.

There is no right way of living a damaged life

“There is no right way of living a damaged life” Theodor W. Adorno

What sort of society do we live in?
What role do we play in it?
Finally, what do the goats in the zoo have to do with it?

In the past, the most diverse types of experiments have consistently proven that goats, contrary to popular opinion, are in no way stupid, but instead very intelligent and can even count. I have therefore resolved to read Adorno’s “Reflections of Class Theory” to the goats in the petting enclosure.
In this essay, the philosopher of society analyses our social system in relation to Marxist theory and explains why we still live in a class society and why that will not change so quickly.
I find it very difficult to think today about alternative forms of society. It is necessary to address the past and to find out how our current system has come about. Adorno’s thinking should not be ignored in the process, since he worked out a lot in this field, which can upon our eyes, we who live in this society.
Yet perhaps we are, just like the goats, naturally dependant on hierarchies in order to live together as a community in an orderly fashion…

In the zoo, each animal has its firmly and seemingly irrevocably pre-assigned place. Everything seems to have its place and everything seems to be in order. Hedwig, a Humboldt penguin, dropped out of this order at the age of two. Hedwig dropped not only out of type, of species, but she no longer fulfils the criterion of a zoo animal proper.
By no longer living in the place properly accorded to her, she opens up the boundaries within the otherwise so well bordered and enclosed life of the zoo. Hedwig is an unusual zoo animal. Her uniqueness makes her story special. The loss of an important sensory function forced her to create a new order for herself. Our prevailing notions of classification and correct functioning are put in question.