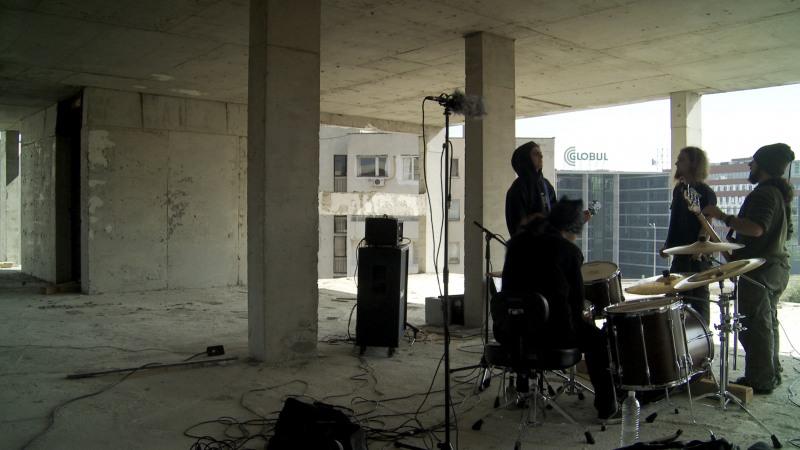 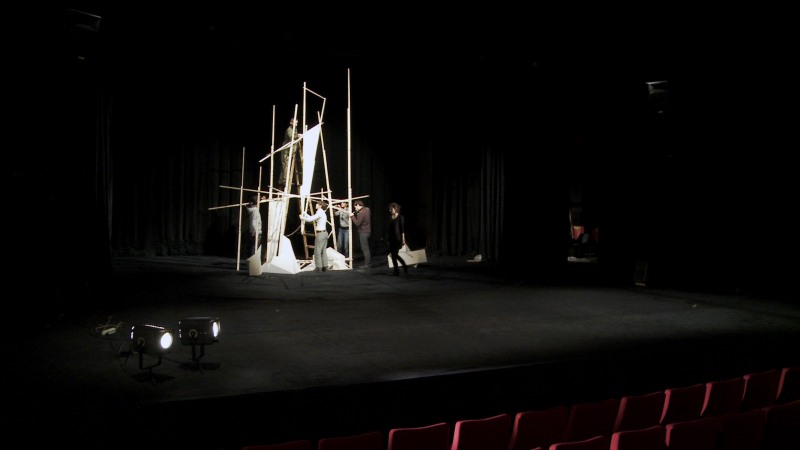 Writing a text about an artwork that has been produced in and is directly related to a specific region that this author has never visited, is an interesting proposition. It was this alienated position that, when addressing Theo Prodromidis’ film piece Je mehr es hervordringt, led me to return to correspondence between Maxim Gorky and Lenin, which I had read a short time previously.

For political and health reasons, the Russian writer Gorky lived from 1906 to 1913 in exile, on the island of Capri, in Campania, Italy. From this isolated location, he continued to support the movement for Russian socio-democracy and, in particular, the Bolsheviks. On this small island in the southern part of the Gulf of Naples, far away from the heart of debate, he developed the ‘God-building’ philosophy that led Lenin to suppress his work. Gorky had set up a school but soon found himself abandoned by his students.

The letters, travelling back and forth, likened a commentary, revealing problems and underlying structures of the debate, while Gorki himself moved farther away from the centre of the discussion with every letter. This process of unravelling themes by means of negotiation is closely related to Theo Prodrimidis’ title for the aforementioned work, which loosely translates as ‘the more it becomes apparent’. Interestingly, to write this text – plus the fact of knowing the artist but being distant from the work’s context – is, in Brechtian terms, reminiscent of the role of a commentator who addresses an artist’s approach. Ideally, this text should be read while watching the film, as a voiceover commentary.

Introduction to the characters

We can identify several protagonists in the film: the architect, the musicians, the architecture to be built, the cityscape, and the sites of artistic production and presentation.

The female architect may be considered as the spy who plays the role of the artist. She uses various media to record and reflect on the built environment and produce several architectural proposals. The musicians – a local heavy metal band – appear in the film on several occasions. We first see them rehearsing on a deserted building site, later driving through the city to pick up a musical score from the theatre and, at the very end, performing for the city. Yet, the city itself is the true subject of the film, the social, political and ideological constitution of which are rendered legible architecturally, notably by three central venues: the Mall of Sofia, the Sofia Business Park and planned Europe Park Sofia, with its Europe Tower. The potential in this latter site reveals the current state of Sofia. Spread throughout the city, these commercial structures evoke the region’s adoption of free-market capitalism. By way of contrast, we are presented with footage of a theatre that owes much to a strong communist aesthetic.

Registration of a social political landscape

A heavy metal band is seen rehearsing on a deserted building site, in front of Sofia’s business centre; the view is rhythmically interrupted by footage of the sharp-edged architecture, shot from steep angles. The thick sound, characterised by highly amplified distortion, echoes throughout the building site while the band members address one another, thereby defining their relationship to and interpretation of the surrounding cityscape.

In the following scene, the architect is alone in an office. We are still left in the dark as to whether she is actually an architect or a spy. On the table we see plans and images of buildings and modernist icons such as Mies van der Rohe’s Seagram Building. The camera moves over this collection of antecedents, references, influences and plans, thus reflecting on and framing the position of the design at hand. On the wall, we detect a map on which are marked the different building sites in the city. Images of commercial structures that reveal the future shape of the city are attached to the map. The architect answers the telephone and … Prodrimidis reminds us of the nature of the work: instead of fulfilling our expectation of a standard cinematic narrative, he has her quote from Hegel’s The Science of Logic in German. We cannot follow. She speaks too fast. But, if we enjoyed the luxury of knowing the text, we might understand this passage as a signifier of the artist’s approach to his work. The quote serves as a catalyst for a leap to the next sequence, in that we are made aware of the role of the actress and of our own, as viewers. We see the architect drawing over the material shown, then painting red, black and blue triangles on tracing paper. A book by Berthold Brecht is on view, pointing us once again towards the act of intertwining a work and a critique of it. As in French Nouvelle Vague, the insertion of philosophy is considered an object and is part of the film set. Prodrimidis negotiates the present, future and past by translating the building in various media while making no attempt to suspend the viewer’s belief that a plot may exist in the sequence of moving images.

The act of translation

We find ourselves in a theatre. Architectural features, witnesses of communist aesthetics, reveal the history of the city of Sofia. A set is being built and references to constructivism with it. The triangle is the predominant shape. (I wonder whether the very simplicity of this basic geometric form makes it possible to signify a new beginning.) The architect again cites a quote, this time from Walter Benjamin’s Goethe’s Wahlverwandschaften. Cinematic time and space seem to break apart, thanks to this insertion. As the quotation states, the ‘subject matter and truth content, united in the work’s early period, come apart during its afterlife’: the theatre’s architecture as captured by the camera, and the set design are negotiated in a future context. The architect makes notes on a musical score – processing the building through yet another medium, this time as musical notation, as architecture in an immaterial state. Throughout the movie it is the same building, the Europe Tower, captured from different angles, which simultaneously performs as a notation and as a cultural object. Its points of reference and the ideological state are abstracted.

The simultaneous production of architecture

We follow the heavy metal band, thereby tracing the city from East to West, travelling the film’s trajectory. Building sites and a huge number of towers appear in front of us. We arrive in the historical centre, where sites of cultural production are embedded in the urban layout. The band’s front man picks up the musical score left behind by the architect in the theatre – after which the band starts playing. All this takes place in front of the Mall of Sofia, next to a socialist era apartment block, locally referred to as the ‘Chinese Wall’. To choose a heavy metal band to express form as music may seem surprising, as we know this research from early modernism where form was performed through serialist systems. Here, instead, the musical antipode to the Europe Tower lies in the aggression and power of heavy metal, while the humble position of the underground scene serves to criticise current socio-political conditions.

These transformations from materiality to immateriality and vice versa contain the memory of every single state, a memory captured by the motion camera.

Architecture that is yet to be built is created and rehearsed. The suprematist structures of the set design – which I would argue are constructivist in their aspirations – are the score, sketched out by the camera to represent form. In parallel, we experience musical and cinematic performances by the band and the camera. The camera no longer registers its environment but rather, expresses a critique of the architecture shown by creating an affectionate and expressive cityscape.

Now, props and the film are displayed in – displaced to – a German rather then Bulgarian context. EMARE commissioned the film and this exhibition in Halle, Germany, works as a time loop. By placing the set-design next to the projection, Theo Prodrimidis reflects upon the origins of the production of the work and investigates correlations between representation and production. The incorporation of time is a common thread throughout the artist’s work. The relation of the work to its present state is in constant dialogue also with the past and the future, and thereby creates and negotiates its own position. Insofar, negotiation of this particular architectural form reveals the history, current state and potential future of the region in which the film was produced. Underlying structures and contentious issues become more and more apparent.