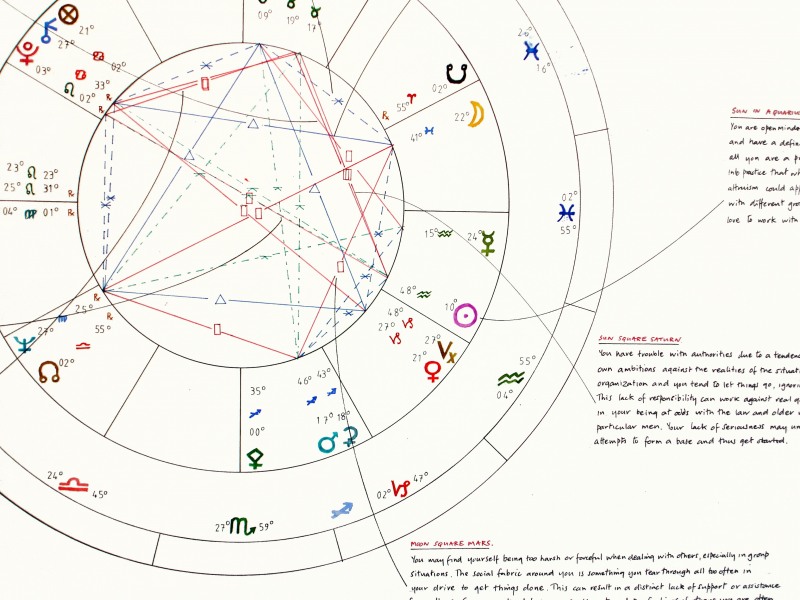 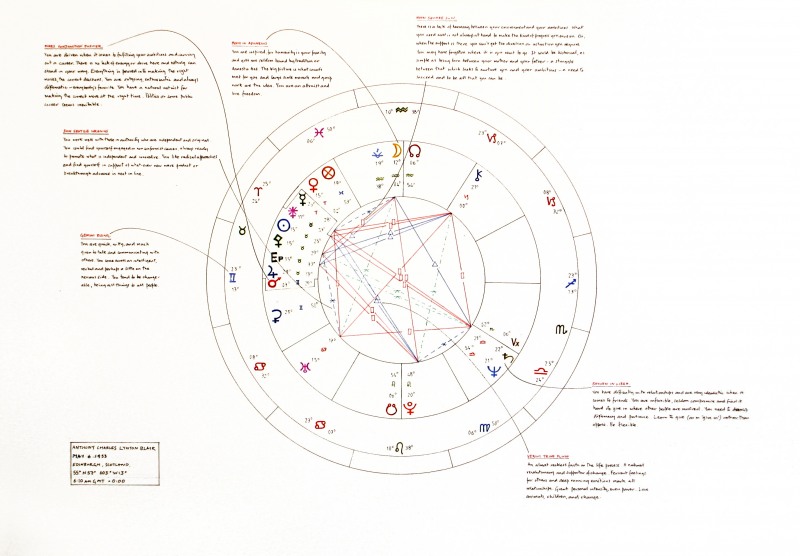 In his work Intelligence (2005), the British-Australian artist and curator Richard Grayson treats modern technology as a system of belief charged with emotion and promises of redemption. The visions that are today linked to the achievements of technology are characterised by the power of omniscience, the promise of dominating nature and being able to ward off all perils.
Grayson presents a curious collection of astrological horoscopes for political figures involved in the Iraq War and the “War against Terror”: Condoleezza Rice, George W. Bush, Tony Blair, Saddam Hussein, and Osama bin Laden. The luminary constellations drawn by Grayson in painstaking detail are based on computer-generated – and thus preprogrammed – material from the Internet. The computer programme7 combines and arranges the positions of the planets according to prepared text elements. The result is supposed to represent a “cartography” of the most inner motivations and psychic potentials of a person, with sentences like: “Your enthusiasm is so strong it can sometimes be a little too much, making others uncomfortable.” Astrology is generally not a science, but is commonly understood as science’s predecessor, a pioneer of astronomy with its origins in the Arab world. As a pseudo-science, astrology in the West is particularly widespread in the Internet, where many “enlightened” individualists apply the predictions to their own life planning. Technologically programmed future predictions from the World Wide Web thus find their way into popular systems of interpretation and belief.
As Grayson puts it, “To conflate astrology with the approaches and technologies of modern intelligence gathering and welfare, illuminates the emotional and symbolic loadings that we place science and technology8… The work articulates the element of desire that lies in the idea of ‘intelligence’ (and in the dreams of the technological): that it represents a desire for a system to exist by which the random and the un-anticipatable may be narratised and understood, and so prevent the unexpected and the terrifying from taking place. … The same desire is expressed in a belief in the forces of the planets and stars upon people and their lives that is systematised in astrology.”
Both systems of cognition, that of rational technology and irrational esoterics, claim to influence the future and promise to help us to avoid unknown perils. 9 Are technological developments the saviours of our times? Is belief in our capacity to solve problems unbroken? Do we expect paradisiacal conditions if technology and science could finally develop to their fullest?