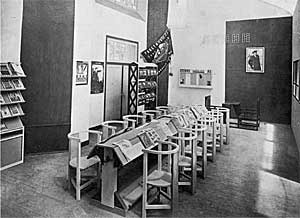 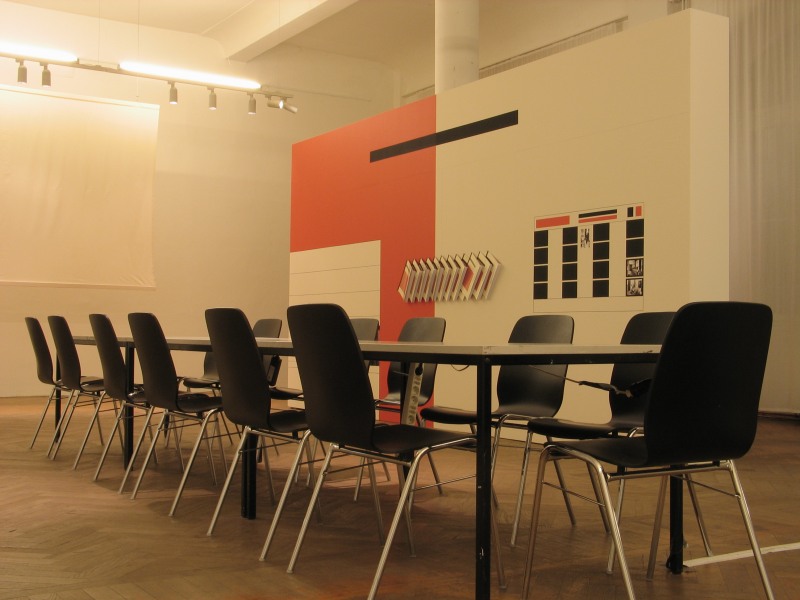 Four installation elements intervene as models in the setting of the Volkspark – in an interplay with the exhibition architecture that was specially conceived for the biennial and as inserts in the presentation of contemporary artistic positions. On the one hand, they cite displays and architectures by Aleksandr Rodchenko, Laszlo Moholy-Nagy and Vladimir Tatlin, who in the 1920s made concise statements on the social function of fine arts, theatre and architecture. On the other hand, the reception of constructivist, revolutionary formulations is adapted (Ken Isaacs’ Matrix from 1954), highlighting its influence on the modern mediation of knowledge, on exhibition designs, architecture, fine arts, advertising, and design. These historical references form the background of a number of narrations on the theme of common property that pursue questions pertaining to the cultural and social production of knowledge and discuss their mediation. The inserts adapt the historical designs as spatial installation foils in front of which the staging and “theatricalisation” of knowledge is thematised, discourses on education and representation are pointed out, and specific moments of self-empowerment and of the collective acquisition and use of knowledge are illuminated. The venue of the biennial, the Volkspark in Halle, is also reflected on. Its grounds bundle the lines of tradition of a mass movement that, after the abolishment of the Socialist Act (1890), developed collective forms of life and tested them on a large-scale level.

The history of the Volkspark can be described as the history of diverse contestations over the appropriation of property and knowledge. What also appears interesting from the perspective of cultural history is the observation that the historical architecture of the Volkspark, built according to the bourgeois model, is dominated by stages and performance spaces that provided for a distinct separation between the protagonists and the audience. The utilisation of the building as a political and cultural arena also seems to have affirmed and continued this separation to a large degree, across the decades and under different ownership relations. At the same time, this Volkshaus offers the opportunity to critically reflect on the resumed use of constructivist means of medial design in everyday life in the GDR society – wall newspapers, banners, Lenin corners, tradition cabinets – and to examine whether there were elements and potentials of resistance in the tradition of workers’ clubs.

The insert on the ground floor of the Volkspark offers a place for this investigation. It is an adaptation of Aleksandr Rodchenko’s interior of a workers’ club shown in 1925 on the occasion of the Exposition Internationale des Arts Décoratifs et Industriels Modernes in Paris. Along the lines of production-artistic knowledge mediation and with reference to Rodchenko, a room is furnished for the groups of the biennial’s Halle School of Common Property to communicate their practices and the results of the workshops that preceded the festival.

The two inserts in the large hall of the Volkspark cite Vladimir Tatlin’s mise-en-scène of the meta-poem “Sangesi” (1923 in Petrograd) and the “Raum der Gegenwart” (1930) that was designed by Laszlo Moholy-Nagy and commissioned by Alexander Dorner for the Hannover Provinzialmuseum. They tell of the staging and “theatricalisation” of knowledge, of representation and education systems, didactic models and learning machines. For the 6th Werkleitz Biennale the historical designs are appropriated and used as displays for interpretation: lines of conflict, ways of reception and adaption as well as social struggels and differences between socialist and capitalist societies are emphasized in an exemplary way. Special attention is given to spontaneous performances and actions, moments of collective authorship, attempts at self-organisation and empowerment, as well as alternative and participatory strategies of producing and communicating knowledge, which were often developed in opposition to the dominating systems of representation. There are accounts of the occupation of the Milan Triennial in 1968 by students, for instance, and, using the city of Halle as an example, the creation and transformation of collective counter-cultural practices are examined: the actual occupation of land, building processes on a public benefit and cooperative basis, consumer organisations, alternative youth culture, spontaneous self-help in groups, politically intervening self-legitimisation, and demonstrative actions with artistic means.

A fourth insert located in front of the Volkspark makes reference to a drawing by the US-american architect and designer Ken Isaacs, whose work can be looked upon as exemplary for the American reception of Bauhaus modernism. The adaptation of Isaacs’ Matrix (1954) formulated with the insert differentiates itself from Isaacs’ often undiminished optimism and attempts a critical reflection on the societal and social implications of a modernism based on the principle of construction, which was subject to diverse formalisations, reformulations and adaptations. It produced exclusions and led to impasses, but it did promise democracy and offers attractions that permeate all corners of life until today. The construction located in front of the Volkspark building, as a spatial adaptation of the matrix, refers to all of these implications and “consequences”; it makes the grammar of modernism, its huge influence, and not least its social implications, the object of debate. It can additionally be read as an ironical allusion to the minimalist sculptures in public space or as a comment on the promises of the Internet. K. R.