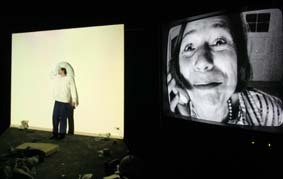 “You let the world run its course, but you don’t run with it anymore.”

Hikikomori is a Japanese word for people who live in voluntary isolation and primarily operate in virtual worlds. In Holger Schober’s play of the same name, the teenager H., who hasn’t left his room for months, happens to meet a girl in a chat room. This seems to open up the possibility for him to leave the prison he had created himself. But the liberation from the cage of his own self coagulates into an illusion not unlike that of video games and computer friendships.

Hikikomori, directed by Anne-Kristin Jahn, was supported by the A38 scholarship awarded by the Werkleitz Gesellschaft together with the Kassel Documentary Film and Video Festival. The project was supported by the East-West Exchange Fund of the German Federal Cultural Foundation.