don't look back until you cry 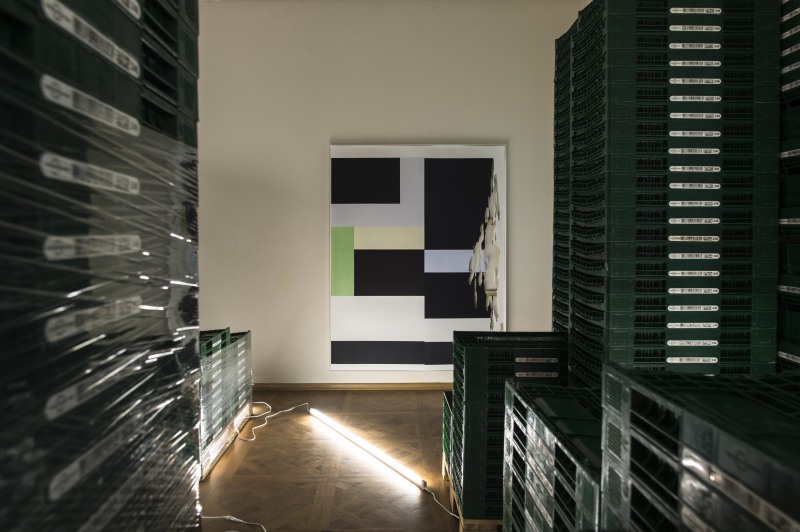 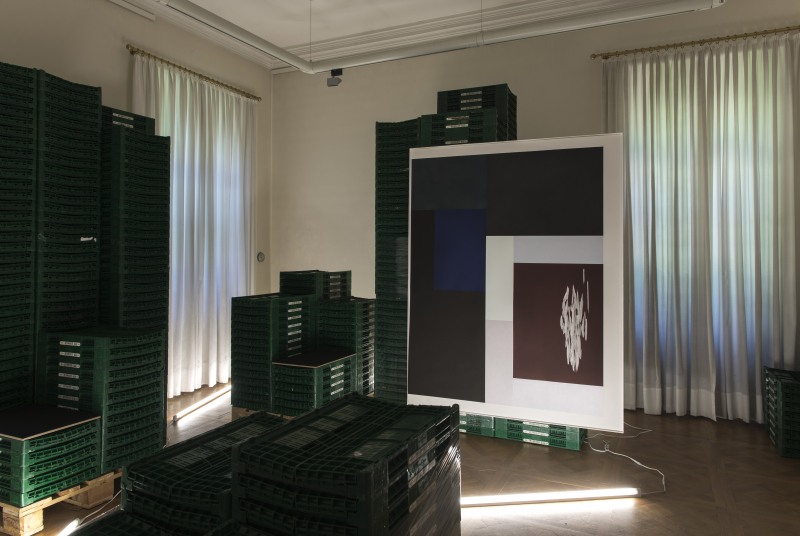 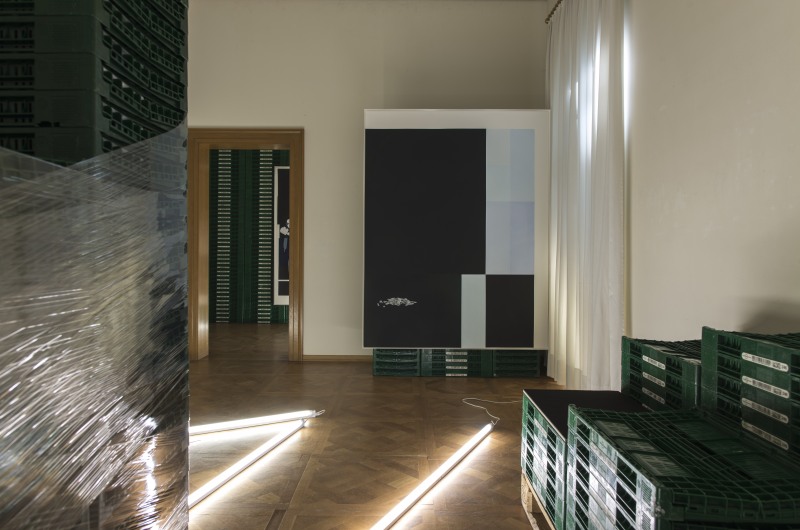 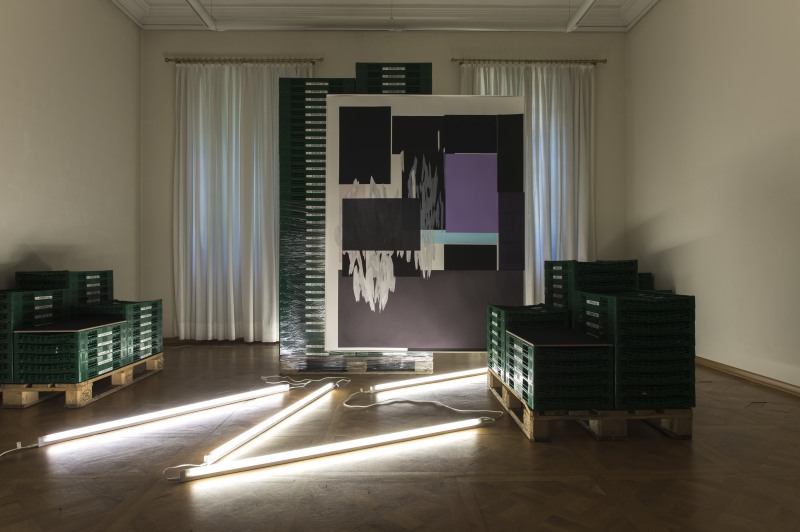 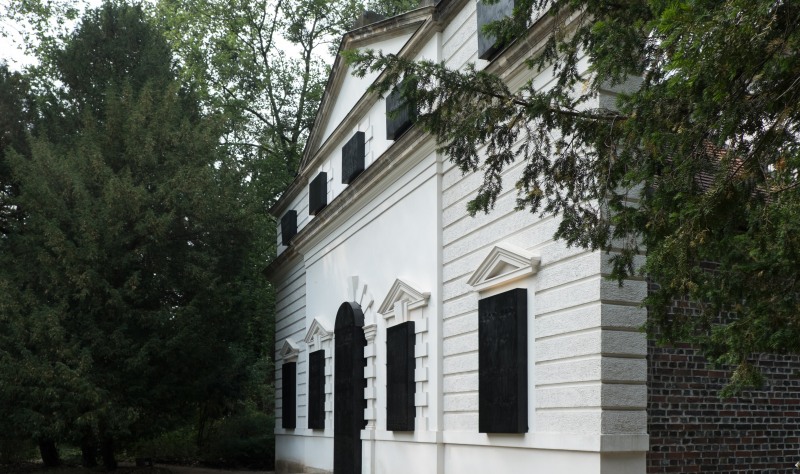 If you were to look back at the 20th and 21st centuries from some future point in time, our ruins will be composed of concrete, asphalt and plastic: weathered bitumen and mountains of plastic bags. Emblematic is the standardized plastic crate known as the small load carrier – tied to the economic fortunes of the petrochemical industry. Romain Löser works with these, creating seemingly abstract paintings that take their colours and their forms from the physical reality of the worlds of modern shipping and warehousing. In the Fremdenhaus, the former guesthouse of the rulers of Anhalt-Dessau, Löser depicts the alienness of the current realities of logistics: paintings for the Anthropocene. Whilst in the 18th century it was the styles of former epochs that served as the models for an idealized past, today it is these plastic crates that will be the defining elements of our future.

AK: Your painting and in the broadest sense pictorial work seems at first glance to be abstract and formal. Yet it makes specific reference to the world of warehouses and transport and its standardized boxes. Painters are usually interested in landscapes or bodies, in the moods or colourings of the sky or autopoietic surface structures. You scrutinize plastic boxes. What do you find so fascinating about them?

RL: In one of his films Charlie Chaplin goes on a trip. After he has packed and closed his suitcase he realizes that pant legs, sleeves and socks are hanging out from all sides. So he takes a pair of scissors and cuts everything off that’s hanging out. I think that standardized containers exercise a very similar violence.

AK: In our classicist park and exhibition parcours you’ve reworked the former guest house, the Fremdenhaus. Outside you’ve bolted and blockaded windows and doors. Inside you’ve placed pallets full of hermetically folded plastic boxes and paintings on display. Is exclusion a modern ruin for you?

RL: From a capitalistic perspective exclusion is something positive. It occurs to me that I bought my first album by Einstürzende Neubauten because of its cover – I found the “Einstürzende Neubauten” logo so cool. Standardized plastic boxes stacked on top of each other are definitely a symbol of closed, sealed, environmentally harmful systems. They are also supposed to be salutary units – yet the hegemony of the capitalistic world order is becoming less and less credible.

AK: The team of directors of documenta 12 in 2007 formulated the question: “Is modernity our antiquity?” Would you say that you view logistics, something eminently modern, in a similar way as relicts, which you make reference to in the course of your quasi archaeological activities?

RL: The standardized plastic box that you’re talking about – the small load carrier – was developed by the German Automobile Industry Association in order to optimize logistic supply chains. But this box doesn’t care if it’s transporting combustion engines or electric actuators. It holds an important promise: frictionless processes generate more satisfied customers and greater profits. The question is: how many satisfied customers can there be in the world? This is the starting point for the race for raw materials that we now find ourselves in. The box can only transport content. It seems to me that the real relict is the belief in a systematic order that seems to operate according to clear rules and forms.

AK: In a well-known essay about the grid, Rosalind Krauss refers to the religious or spiritual nature of classical abstraction and colour-field painting. She writes literally of a “mythical force” in geometric abstraction which appears to allow modernist artists of the interwar and post-war periods to reconcile the rationalization processes taking place all around them with a holistic, spiritual view of the world, a more exalted universalism. In your works the dimensions, shapes, proportions and colours are derived from logistics as a transcendental entity that nevertheless yields very specific shapes and colours. They also create the modern “golden surface” or “universe of ideas” contained in the grid. How do you relate to the classic avantgarde? What significance do colour fields have for you?

RL: Transcendence sounds like something out of service, but empathy is important to me.There’s a historical irony in the massive propagation of abstract expressionism as a completely American artistic trend, as the point of reference for most of these artists was the Russian avantgarde. Maybe Rosalind Krauss is only trying to corroborate the movement’s American legacy? The development of Manhattan as a grid originates from a time when Malevi’s parents didn’t even know each other yet. Maybe there was an attempt to escape the grid by transcending it, but it has never gone away.

GPS has been around since the 1970s. We are more or less mobile points on a grid, depending on which passport we have and how much money. Digitalization serves to tighten the net.

I would rather sing about the banality of the grid: it isn’t radical, it’s just pragmatic and omnipresent. It stands for surveillance, systematic violence, exploitation and expansion. The lines in my pictures are yielded by contiguous surfaces, and regardless how cleanly I work, every surface has a leak somewhere – control is an illusion.

Achille Mbembe speaks of a genealogy of the separation and division that Frantz Fanon had already described and that permeated (at least) the 19th and 20th centuries. Borders can be locations of encounter and curiosity – or we and our kind can stand around patting each other on the back.

AK: If according to our interpretation historical modern movements are characterized by their individual, programmatically defined embracing of past epochs, the present and/or the future, how would you describe your own relation to foregone eras or those yet to come? How far forwards into the future do you stretch, how far back into the past do you lean?

RL: If I raise my arms as high as I can I am 2.4 metres tall. And with Michael Jackson’s anti-gravity shoes I can lean back about 45° into the past.