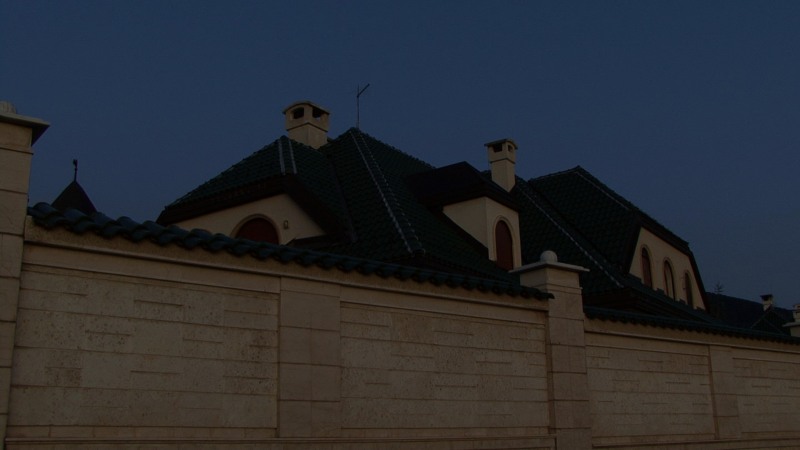 If anybody had asked me how an urban situation stripped of human activity might look (leaving aside catastrophic sci-fi scenarios), something as simple as observing a residential area at dawn would have never occurred to me.

Sunrise stillness is somehow the antithesis of what we perceive urbanity to be, for cities are always full of hustle and bustle, be it during working hours or at drink-up time. At best, it might evoke the memory of having seen a built-up landscape, after a party. Yet, how attentive is one really, to the sights the city has to offer on ones way home?

The city at such a dead time is rarely a focus of interest or observation. I was therefore somewhat surprised when Dagmar Keller and Martin Wittwer came up with the idea of doing a project titled Den Tag erkennst Du schon an seinem Morgen during their Sofia residency. They planned to shoot two neighbourhood ‘sets’ during the two and a half hours in which complete darkness melts into dawn, when warm yellow light slowly spreads out, before rocketing into brisk blue, carving out the silhouettes of the buildings.

To be honest, listening to the artists’ pretty straightforward plan, it was neither the light waves’ morning workout nor the inherent dynamics of its photographic qualities that captured my imagination. I was invaded rather, by a banal curiosity as to what the time lapse might be between the wake-up calls of the people whose housing was to be framed in the two channels of the video.

The right-hand screen of Den Tag erkennst Du schon an seinem Morgen shows long shots of places that the rising sun renders discernible as a large-scale settlement, built quickly in order to meet demand for housing in the rapidly expanding capital; and the left-hand screen reveals images of swanky suburbia, as well-heeled as ever, with Mount Vitosha as a backdrop. Yet, neither screen functions simply as the flip side of the other. This mirrors to a certain extent the confusion that – in a period of transition, from what was held to be a classless society to one determined by free market forces in a global economy – seems still to imbue relationships between left-wing and right-wing affiliation, between economic status and social background.

Composed of long sequences with gradually changing light, the natural sounds of crickets and dogs and the sporadic roar of car engines, the piece offers serenity and minimal movement. The moon outlines the contours of what will be revealed to be buildings, then slowly dips down. The streetlights go off. Occasionally, a window lights up.

In Lyulin, the first figure one sees is a man collecting stuff from garbage cans, and pulling a small cart on which he stores his valuable finds: a one-man business subject to the principle ‘first come, first served’.

Some time later, a stray dog passes by: perhaps the stray dog of a stray person.

Among the prefab-slab apartment blocks there are uncultivated patches of green. In one of them an autonomous pathway seems to be cutting its way through the high vegetation. There, in front of the camera, a group of people in yellow jackets slowly marches by, brooms in hand. A few more passers-by make their way through the greenery.

Sipping their morning coffee in plastic cups, another yellow-jacketed mission of the state programme for temporary employment waits for public transport that will take them to their unattainable goal of cleaning up the city. A dog family plays cheerfully on the green patch next to the bus stop. The day has begun.

In Boyana and Dragalevtsi, the camera frames family houses with big yards, surrounded by high concrete fences that end abruptly in uncultivated patches of green. In some places, it seems no planning ever took place: one house here, another there. The infrastructure here is just as illogical as in Lyulin. There are the old big houses of the former party elite and the new houses of the nouveau riche; the neatly painted residencies of diplomats and the summer dwellings of the ‘intelligentsia’; surveillance cameras and observation cabins; secure castles built in ‘mafia-baroque’ style.

The inhabitants and the dwellings can be matched only by judging the impenetrable facades and fences. And, although one knows that Being a stranger to the local context always carries the risk of either superficiality or overburdened rendition. The serene, contemplative nature of Den Tag erkennst Du schon an seinem Morgen eludes both. In this installation, Dagmar Keller and Martin Wittwer pursue further their interest in residential areas, urban tissue, the desires and self-representations of urban dwellers and the intersection of communal planning and top-down political intent (Say Hello to Peace and Tranquility, 2001; Tor Tre Teste, 2006/07; What You Want to See, 2006). Other consistent features are the lack of storyline and the rare appearances of people. Human presence is depicted rather, in terms of a real or fictional habitat. However, the imagery of Den Tag erkennst Du schon an seinem Morgen brings together, for the first time, two worlds that are by nature irreconcilable. Both were featured in previous projects but here, they are full of displacements and peculiarities that defy one to consider them as being poles apart.