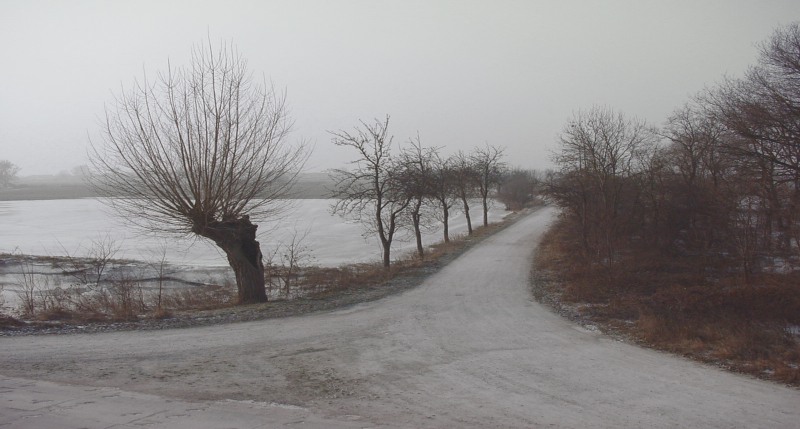 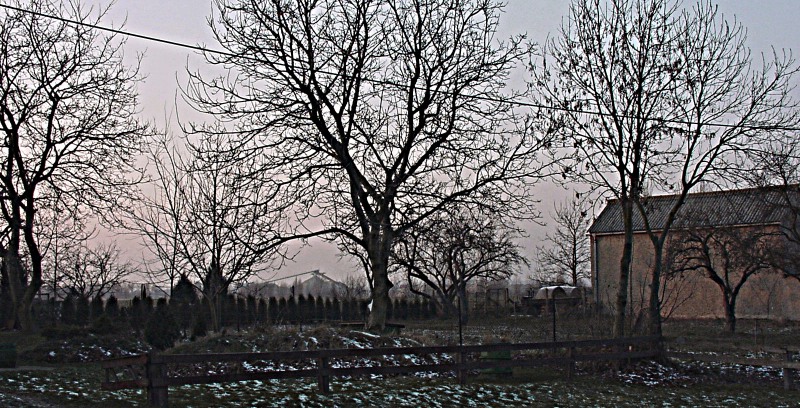 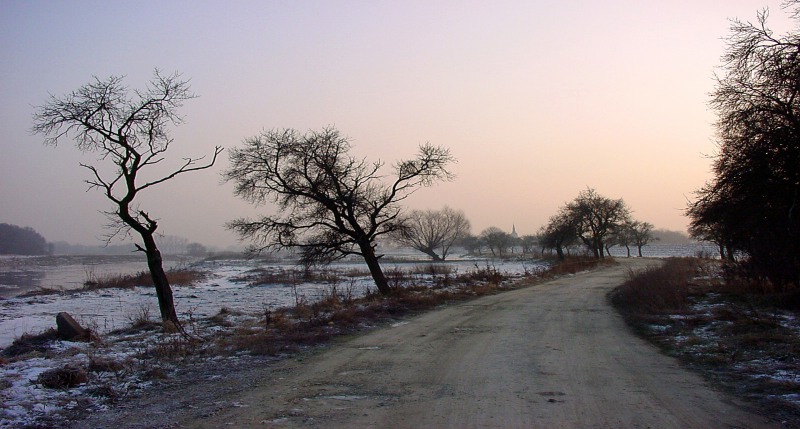 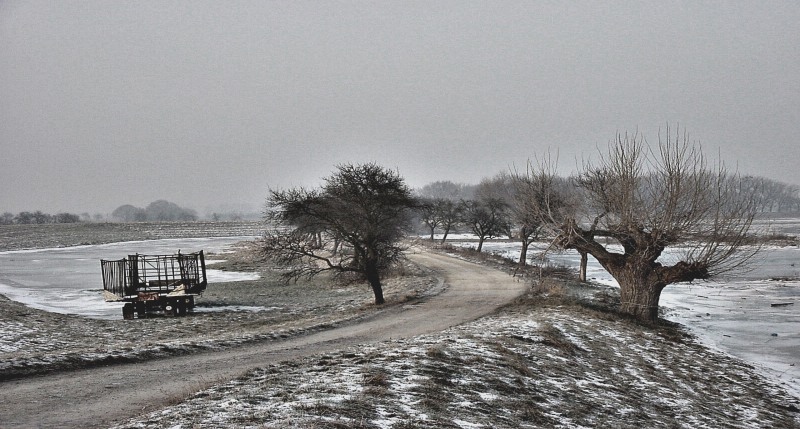 The four works represented here were the product of a commission by the Werkleitz Gesellschaft Media Arts Lab as part of the EMARE 2003 European Media Artists Residency Exchange program, which took place between November 2002 and February 2003.

The Werkleitz Gesellschaft was at the time based in one of two small villages which sit together in the countryside of Sachsen-Anhalt province, in what was formerly the German Democratic Republic (DDR). The conditions of the residency allowed me the opportunity to live and work in this small community for two months, with an apartment and technical equipment at my disposal. The access to good digital video facilities in a remote, rural setting- and a sympathetic and supportive environment of media professionals who actually lived in the area and understood the issues relating to it- were the crucial factors behind the conception of these pieces.

Our conception of the Europe we live in today is largely influenced, whether positively or negatively, by our media. But what do we really know about our European neighbours? Not the politicians – the lorry drivers, school teachers, farmers, publicans- those people who constitute the majority of the inhabitants of this new Europe ?

Behind every big European city lies a hundred towns; behind every town a hundred villages; in every house in every village, a thinking individual living the Europe of today not as socio-economic theory in Brussels or Strasbourg, but as the reality of their daily experience- living that history as it is made, around them as much as by them- each with their own ideas and feelings on the society they find themselves part of, each with their own conceptions of the people who live in the country next door; their partners- for better or worse- in the new European adventure…

The starting point for Dot Land was the wish to explore this thought, by asking ordinary people from two established EU countries what they actually knew about each other: certainly some clichés would come up; maybe some novel insights; and maybe in the comparison, each side would get to understand a little better what it was they actually had in common- culture, ideas, hopes and fears, in the continent they share.

Germany: It is only 13 years since re-unification. Many of the inhabitants of the villages of Tornitz and Werkleitz grew up in the years of the German Democratic Republic (DDR). They find themselves now living in a changed Germany, and with a changed conception of Europe. Social values have altered, as it were, round them- for some, perhaps in spite of them. The old socialist-era heavy industries have largely gone, „rationalised“ out of existence by the changing needs of the global market in the era of the two George Bush’s New World Order. They have to find a way to pick up the pieces and go on.

Scotland: It is only 13 years since the end of Margaret Thatcher’s long domination of political life in Britain. Many of the inhabitants of the villages of Newmains and Shotts grew up in the years when there were extensive mining and steel-making industries in the area. They find themselves now living in a changed Scotland. Social values have altered here, too. Margaret Thatcher was a friend and collaborator of Reagan and Bush Senior; she believed in the changing needs of the global market, the idea of the New World Order; these industries, too, were „rationalised“ out of existence. These people, too, have to find a way to pick up the pieces and go on.

What stories can they share ? What can they recognise in and learn from each others experience?

Over the course of several weeks, I filmed interviews with local people in Tornitz and Werkleitz, asking them a range of questions: firstly about their community, and the changes of the last years since German re-unification; then about Scotland, their close European neighbour as part of Great Britain, and what they actually knew about Scotland and the Scots.

I next returned to Scotland and, visiting Newmains and Shotts- two similar small villages in the county of Lanarkshire (half-rural, half-industrial)- asked a selection of local people the same kind of questions in relation to their community, and what they in turn knew about Germany and the Germans.

Having made a selection from these answers, the film was then structured into different sections with mixed voiceover commentary from the Scots and the Germans describing their feelings about the place they lived, the times they lived in, and their perceptions of each other.

Each section employs a different style of imagery to best reflect the comments of the speakers- some comparing and contrasting shots of the rural landscapes of both communities; others comparing the TV stations they watch; still others exploring the clichés or insights the two cultures had about each other through the use of animated still images. Likewise, the techniques employed in each section vary from naturalistic real-time cutting to multimedia composited overlays.

The sound design attempts to underscore this process: environmental sounds from each location were merged and resampled, and played off „re-composed“ musical themes that pastiche German and Scottish „national anthems“.

Dot Land wished to address, and sometimes counterpoint, the issues raised by the Scots and Germans who participated, in ways that reflect their own attitudes to those issues- by turns serious, ironic, humorous, angry, sad. My own conclusion was that these two peoples have much more in common than they realise, as the stresses of social and economic change make their effects felt in both places. I also discovered a pride in their own communities that- hopefully- would give both the resilience needed to weather that change.

The Werkleitz Gesellschaft is situated in one of two small villages, Tornitz and Werkleitz, which sit on a horseshoe curve of the river Saale just downstream from where it meets the Elbe. The villages are surrounded on nearly three sides by the river’s loop. The Saale is one of the tributary rivers which give the Elbe its massive size and strength by the time it reaches the North Sea near the city of Hamburg. The Saale itself is broad and has a strong current with dangerous undertows. At one time the Saale-Elbe line marked the historic frontier between the German and the Slavic peoples. As such, it has been very literally at the centre of European history. For all that, the local environment is characteristically rural and unchanging in its essentials. The river is both a friend and a threat: what fertilises the crops sometimes swells over the dyke and floods the houses. There is both a larger and a darker symbolism in this for those who chose to see it.

river / sundown / 02.03 is a visual meditation, a moment in time in this river environment. It depicts the Saale at sundown on February 13 2003. A shifting, looping frame of colours gradually draining of light. The sound of the river, sampled and pitch-shifted in the competing currents of long octave-sustains like thermal depth gradations, warm and cool.

Here at this bend, the Saale flows freely. In 10 Kilometres it will flow into and merge with the Elbe. Not far downstream, the surface of the Elbe is partially blocked with ice drifts. The river floods its banks and deluges the fields for hundreds of metres to either side. Other ice blocks break free and carry on. The strong current takes them north, towards the sea.

Common Grazing is a sound journal composed of impressions and memories recalling my time spent in and around the villages during the residency.

Through observational spoken word narrative and the „found“ sounds, voices and textures of the audio environment, the piece attempts to build a sonic picture of the life of the villages.

It is structured as a series of movements representing different sonic aspects of the environment that proceeds in a circular transit, starting and ending with the river itself, reflecting the topography of the villages, which sit in a curving bend of the river Saale just a few kilometres short of where it disperses into the Elbe.

Fluss (River) : Dorf (The life of the village- people, animals, woodchopping, machine mending, church) : Fernsehen Reklame (TV- media culture, advertising, commerce, entertainment- the electronic creation of a shared contemporary German identity in the abstract) : Bergwerke (The demise of the former heavy industries of the DDR and their contemporary local equivalents- light engineering, opencast mining, versus the rural environment in which they are placed) : Eis Wald/ Am Anger/ Fluss (The river in winter- the natural and historical context which has shaped the life and culture of the villages).

The church bell in Tornitz is featured as a kind of leitmotif to which the piece constantly returns: it can be heard all over the area for some kilometres around the village, and is used here to suggest a certain historical continuity in the essentially unchanging rythms of rural life.

Am Anger is a companion piece to Common Grazing, utilising most of the same sonic elements in a similar structure, but without the accompanying voiceover narrative- in this sense it is perhaps a „purer“ piece, in that it allows the audio textures to play with and against each other without the imposition of a formal overlying meaning which a narrative inevitably suggests.

It takes its title from the name of a road which ran from the village of Tornitz to the river. Ein Anger in German is a village green or shared pasture for the village animals, cattle and horses. I was first struck by the play on the English word „Anger“. At the end of the road was a flooded wood that sat just under the dyke by the river. In the sub-zero temperatures of that winter the water had frozen, and the ice would crack under pressure, sending dopplers of sound skittering through the trees. Hard by it on the river itself, turning ice blocks could be heard crashing and slithering against each other as they moved downstream. The „Anger“ for me became then the hostility and hardness of the natural environment the villagers were pitted against, and came to symbolise a larger idea concerning the hostility of the historical processes they had been subject to from the start: from the first settlements of the area by German speakers in competetive lebensraum conflict with the Slavs on the other river bank, two cultures facing off, stopped in their onward progress by each other (and so much of subsequent German history can be seen to generate from that fact), via Nazism, then the Stasi state, to the present, often untender demands of the global market on an economy still reinventing itself away from Five-Year-Plans and the idealised production targets of the apparatchiks‘ fantasies.

The Common Grazing is thus, to my mind, the shared lot, the historical covenant or cultural complicity of these river communities, both dependent on the river whose closeness fertilises their crops, and threatened by it in the form of periodic floods and freezes. The river in this sense is as much history as nature: that which happens. That to which you are subject.

This is how it sounds to me.