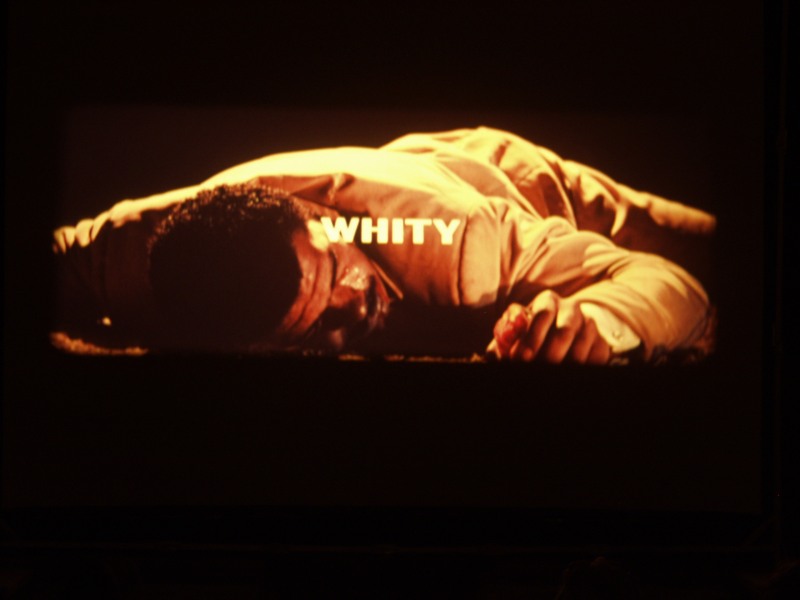 In a very different study of the dynamics of black/white relations, Fassbinder turns to representations of slavery as well. The reference point
here, however, is not art history, but history as it gets told through Hollywood genre films. Whity, Fassbinder’s only Technicolor cinemascope
feature, is a kind of plantation melodrama set in the American West in 1878. It focuses on the decadent land owning Nicholson family, and
their mulatto slave, Whity (played by Fassbinder’s then lover, Günther Kaufmann, who also frequently appeared in his films). Ben Nicholson (Ron Randell), the patriarch, rules over the family with a strong fist and an everpresent whip. He lives in an old mansion in a desolate Western ghost town, along with his perverse second wife, Katherine (Katrin Schaake); and his two sons, Davie, (Harry Baer) who is mentally ill, and Frank, (Ulli Lommel) a homosexual. Ben’s family members are alternately erotically interested in Whity and contemptuous of him. Though Whity willfully and eagerly submits himself to the family’s taunts and abuses, he stops short of their requests to kill their father. In the evenings, he meets his lover, the town whore and saloon singer Hanna (Hanna Schygulla), who urges him to leave this horrible family and “go east.” In the end, Whity does finally kill the Nicholson family, one by one, and flees to the desert with Hanna, where they are certain to die of thirst.

A flop at the time of its premiere, Whity was never theatrically released and has thus remained one of Fassbinder’s least-known films. Formally, it has a lot in common with other films from his early period, including, a non-psychological presentation of characters, long sequences, and slow, studied camera movements. (Whity was cinematographer Michael Ballhaus’s first collaboration with Fassbinder.) Thematically, the film fits in squarely with the rest of Fassbinder’s work: its harsh critique of heterosexual family life, its staging of personal relationships as uneven systems of exchange, and, most significantly, its incisive critique of the dynamics of racial oppression. Through its staging of black and white relations as a kind of erotics of dominance and submission, Whity remains one of Fassbinder’s most fascinating and relevant films for contemporary discussions of race and sexual desire.