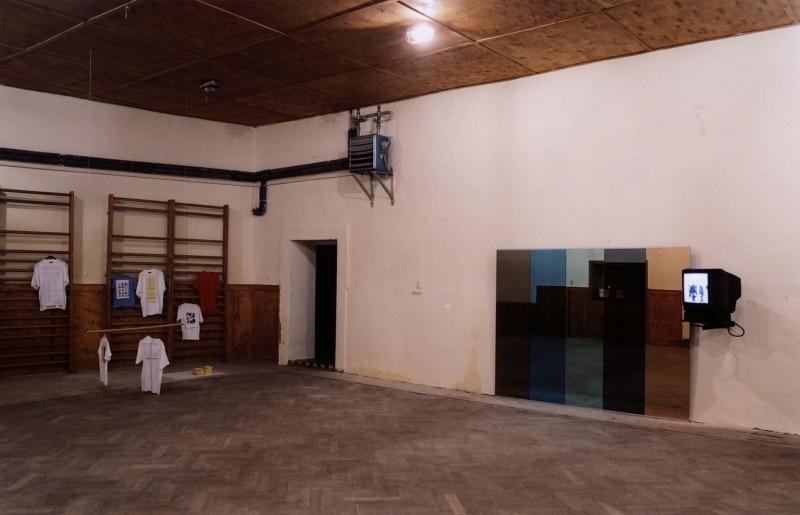 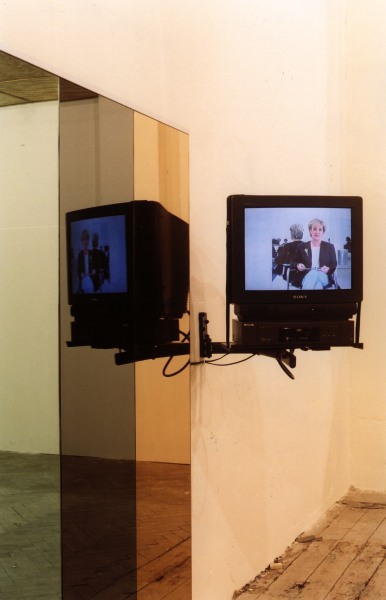 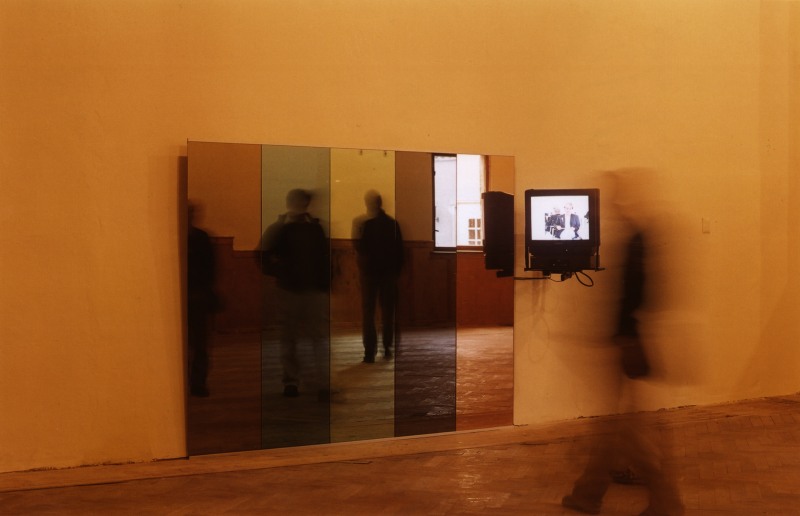 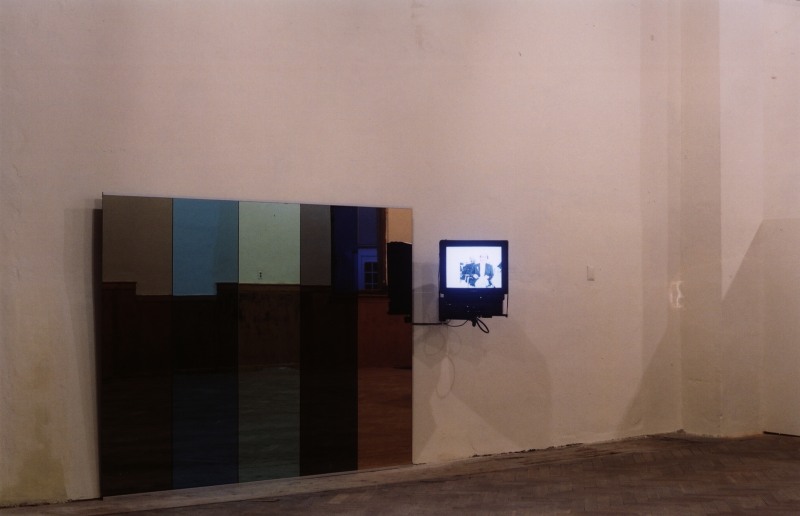 While…. in the gymnasium behind the youth club referred to an account by Robert Linhart (1), one of the intellectuals of the French left of May 68, “LEtabli” published after the events. During that time, more than 30 years ago, Linhart joined the factory workers of Citroén in order to get to know their societal reality and to establish links with the workers’ movement. Instead of some collective identity he found a complex web of individual biographies and relationships within which shared traits and interests were conti- nuously evolving. The monitor, affixed up on the wall next to a row of coloured mirrors, presented former newscaster Dagmar Berghoff reading a script written by Parreno in collaboration with students and members of the Kunstverein in Hamburg, a study on the contemporary potential of Linhart’s experiences: the notion of a factory, which, relieved from industrial labour, no longer produces cars but human relationships: a factory, in which the workers sip coffee, exchange thoughts and have a good time.

The project, originally set up in Hamburg, reflected on principles of function and the selfawareness of art as opposed to those of television and the daily press. During a workshop lasting several days, the participants produced several texts, the video and an exhibition. For the opening of the exhibit in the rooms of the Kunstverein, the work situation there was ‘frozen’, so to speak, a process arrested. During the running of the show, the video was re-run daily on the public television station, another, shorter script was transmitted in daily repetition
on the radio, while various papers produced by the group were reprinted over a period of more than ten days in the feuilleton of the daily paper “taz”.

The installation with coloured mirrors in the gymnasium presented a further development of the project, a new phase. The coloured segments, in combination with the screen-presence of Dagmar Berghof - meanwhile retired - seemed to refer to a historical phase of the medium television, a time during which a test image could be seen in between broadcasts. The installation emphasized its own mediality, the discrepancy between media presence and reality as experienced ‘while’ the presence of the viewer becomes the constitutive element of the exhibition.

“To get off the horse in order to pick flowers” was the slogan of a group of about 1000 people during the Sixties, expressing the vision of a community. In 1967, a number of French intellectuals decided to leave Academia and to join the workers in the factories. They called themselves “L’Etabli” (harnessed); their political party was called “La gauche proletariénne” (The Proletarian Left). Their aim was to prepare a revolution and to change society.

In 1978, Robert Linhart, one of the movement’s leading representatives, wrote a book on this era. “Citroén does not produce cars but relationships”, was one of the key statements, which had influenced his own experience. Therefore he did not describe the grand ideological visions, but concentrated on personal histories, for example by telling the story of Christian, a tuberculous Breton, and of Sadok, the Algerian with Asian features. The workers were not seen as a revolutionary mass, but accepted as individuals with their very own history and identity.

When reading these stories today, it becomes apparent that they had indeed changed their own lives, no matter whether they had spent one week or several years in the factory, but had had only little influence on society at large. But in spite of their failure to change things on a large scale, the social contacts and practice, together with the resulting experiences, created a sense of satisfaction on a personal level. Linhart relates the moment, in which grand ideologies turn into private experiences.

Now, imagine us in the eve of that very moment of change. Right next to the factory producing thousands of cars, you can see another factory: there you will see no assembly lines, no machines and no products in the traditional sense. The workers are sitting around tables, they are chatting and having fun. No image exists of this factory, you will search for it in vain. Still those conversations would produce personal relationships, maybe even friendships. They would have a resounding effect on everybody involved. Seeing this factory from afar, one could image it to be producing clouds.

I would like to inform you that the factory of clouds has ceased its production today. The most important products of this company were human relationships. Every morning, the workers got together at round tables, sipped coffee and exchanged thoughts. The products of this factory could indeed be seen as exemplary for the future. In times of a increasing impoverisation in human relationships it is necessary to systematically take counter-effective measures.