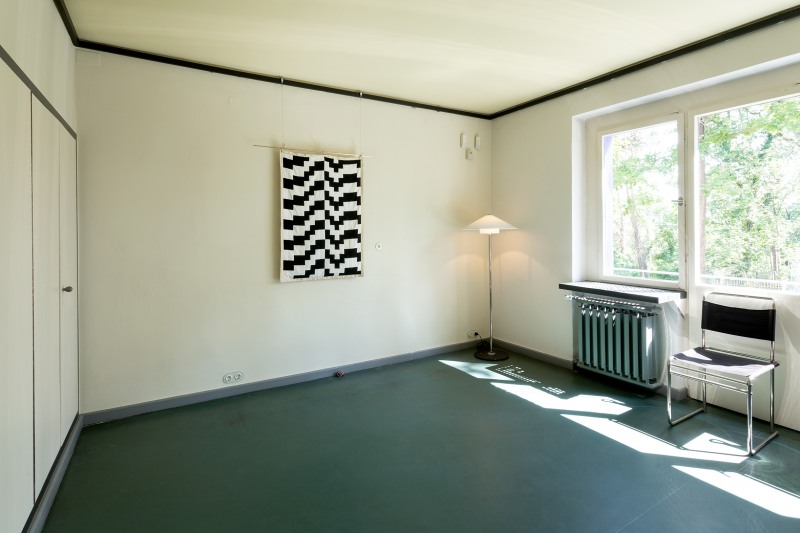 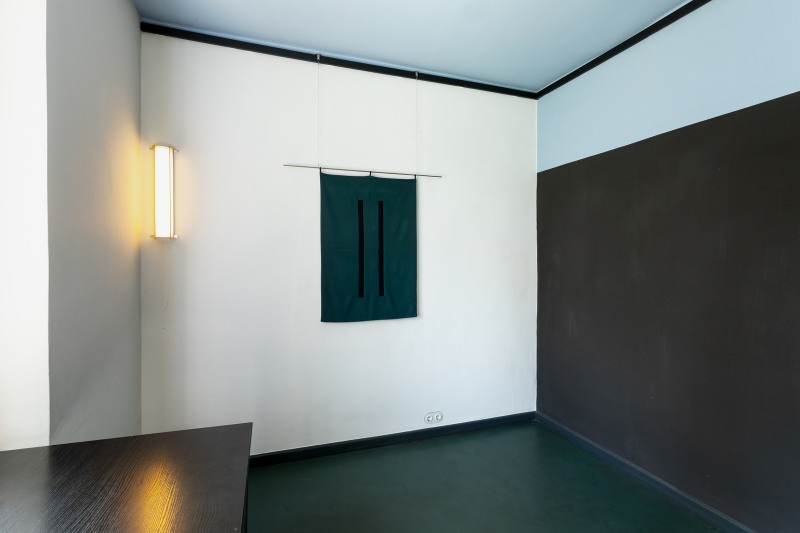 For Model and Ruin Cypriot artist Haris Epaminonda presents a mobile installation in the Meisterhaus Feininger – in her own words an “invisible sculpture” – formed of minimal alterations and interventions. The room itself and the relationships between objects, humans and movement become a work of art. Central to this choreography of objects, sound and gestures are the textile collages she has designed, inspired by patterns from the Bauhaus textile mill, through which she subtly references the modernist marginalization of textile arts in the west as “feminine” and “pre-modern” artistic craftwork. Through her mobile composition, the artist calls in question the legacy of cultural identity and forms of expression in new contexts. How can seemingly familiar and well understood artefacts and themes from disparate times and places once again become mysterious and foreign?

AK: In your installations you bring together artifacts made out of diverse materials in designs and styles from different cultures and periods and let them interact. You arrange them in ensembles that at first glance appear to be harmonious and well-balanced. At second glance a certain tension between the objects starts working, a strangeness that defies the dainty arrangement. Would you agree that this tension, this movement from the seemingly familiar towards estrangement is what you are aiming for when making your spatial compositions? And from where – from which times or places – do you start?

HE: I guess it’s a necessity of mine to understand how all these elements and materials can coexist and built a relationship with one another. Meanwhile loosing their original purpose and way of being perceived, they become instead mere metaphors, shapes, colors, movements, surfaces, textures. Like characters on a micro-plot, they begin to form new narratives. Of course the objects I use will never seize to be what they really are, artifacts each from a certain era, a historical and cultural period belonging to a geographical specificity. However, what counts for me is precisely the moment where the different elements start interacting with one another, meanwhile our reading of them constantly shifts. Each alternative combination creates another relationship, each cosmos another atmosphere, another pretext. I am interested in exploring how far such movement can be stretched from what seems recognisable, at times cliché or almost banal towards an imminent agency, a transformative force which may take place once you begin to observe more closely, once you begin to investigate into meaning. And instead, nothing is disclosed or explained except what lies in front, next to, or around the corner. In an instant, when all convictions and beliefs are in doubt, there is a moment of promise, a chance for a new relationship to emerge between things, to oneself, between others, and to the world at large.

AK: One of the starting assumptions of our Model and Ruin project is that the touristic view on the world as a kind of warehouse of images was constitutive for modern subjectivity: We see images from different times and places and integrate them into our own composition and understanding of our world. Does your work in some way resonate with that observation? Do you see any resemblance between the artifacts in your artistic arrangements and souvenirs?

HE: I would rather say the objects mostly find me than me finding them … And since these objects are mostly old, they arrive from a very distant past, one I have never experienced. My relationship with these objects is quite different, it relates more to what they can potentially become, rather than what they have become or have been.

AK: For your new work in the framework of Model and Ruin you decided to use weaving techniques and designs, an ancient old cultural technique that can be found around the world, and that got a modernization and systematization boost in the workshops of the Bauhaus. What is it that interests you in weaving? Also in the Bauhaus, there had been a distinction between the „male“ domains of painting, architecture and sculpture and the „female“ domain of the work with textiles, which was connoted with „merely“ being handcraft or “applied” art. During the last decades, feminist artists like Rosemarie Trockel have directly tackled this degrading distinction by explicitly using „feminine“ textile techniques and materials for making art in „male“ realms like conceptual art. Do you see yourself in this feminist tradition?

HE: I certainly share the stance of feminist artists in promoting equality and fighting against discrimination. It would be a big statement for me though to call myself a feminist artist especially considering the strong tradition of feminist art and activism from the 60s and 70s onwards. I guess my stance has never been so upfront but rather in suggestive and non-explicit ways, promoting spaces of coexistence and reevaluation. In regards to weaving, I am thinking of the Greek myth of Arachne, who as a talented mortal weaver challenged goddess Athena to a weaving contest only to result in her being transformed into a spider as a punishment. Thus this suggests that in ancient Greece, weaving was considered a high art and one that belonged to the immortals. Having seen the works of Anni Albers at Tate Modern at the end of last year, it is a wonder to me how her work and that of many others were dismissed for so long. For this project, I collaborated with two weavers at Textilmanufaktur Christina Kleßmann, a weaving workshop here in Berlin, with whom we have been in discussion on how to execute better the idea of the specific weaved garment I had in mind. I have also worked with a tailor in Cyprus, and together with Andre Zivanari, a friend and collaborator, we developed a set of textile collages which will be placed in specific areas inside the house, being interchangeable and constantly in flux during the exhibition hours.

AK: When we visited the Feininger Meisterhaus together, where you are going to place your interventionist work, you spoke of having in mind an “invisible sculpture” that would activate the interiors of the building, an “interplay between forms and colours and movements”. What do you mean by that, and how are you going to accomplish it?

HE: I was thinking of a whole set of movements and actions being attuned to one another through the use of different materials, scripts and gestures (including a sparse sound composition which Daniel Gustav Cramer has been working on), and which will keep activating the space, so that the interior of the house can be seen as one complex sculpture going through small and slow transformations.

AK: Observing how you conceive of ideas and designs, play with them and keep them in a constant movement of possibilities, it becomes obvious that processuality, ephemerality and changeability play a central role. Wat does that mean for your work as an oeuvre? What will have lasted of your artistic work?

HE: Well, would it sound terribly pretentious to say that I aspire to making people dream?