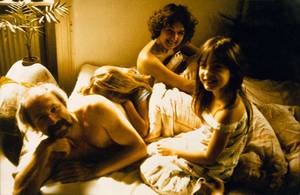 Karin Missy Paule’s work my family… oder so andere Kleinigkeiten, die nicht wirklich radikal sind was developed for the group exhibition Manson 1969 – Vom Schrecken der Situation. The exhibition broaches the issue of conflicts during the 1968 movement. Its title refers to the members of the Manson Family community’s so called Tate-LaBianca-murders in California in August 1969. Karin Missy Paule herself has spent three childhood years with parents and sister in a community near Mainz. In my family… she uses the example of her own family to describe the conflict between middle class society and the protagonists of an alternative life style. The work shows interviews with her family members, however this is not a retrospective work but an acurate description of conditions around the 1968’s generation and their siblings.