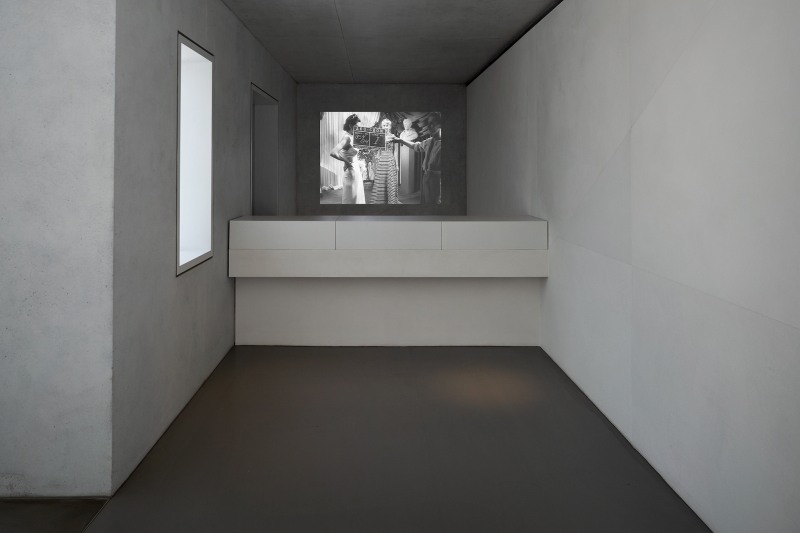 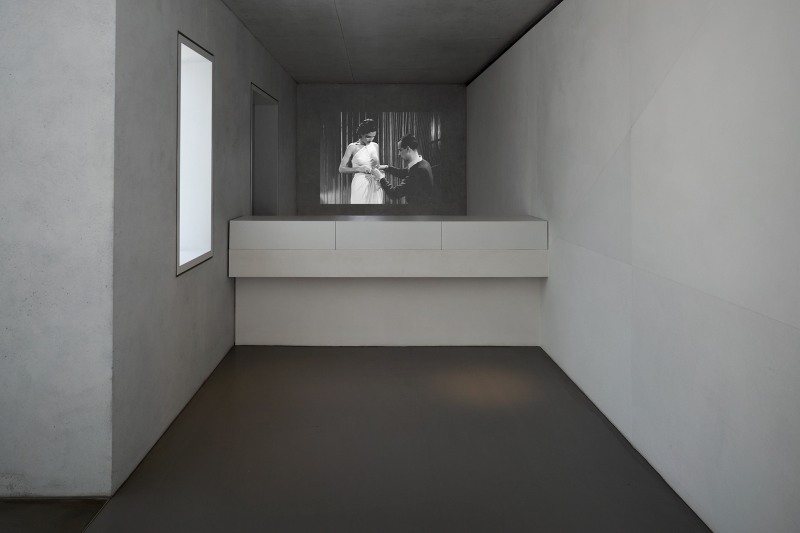 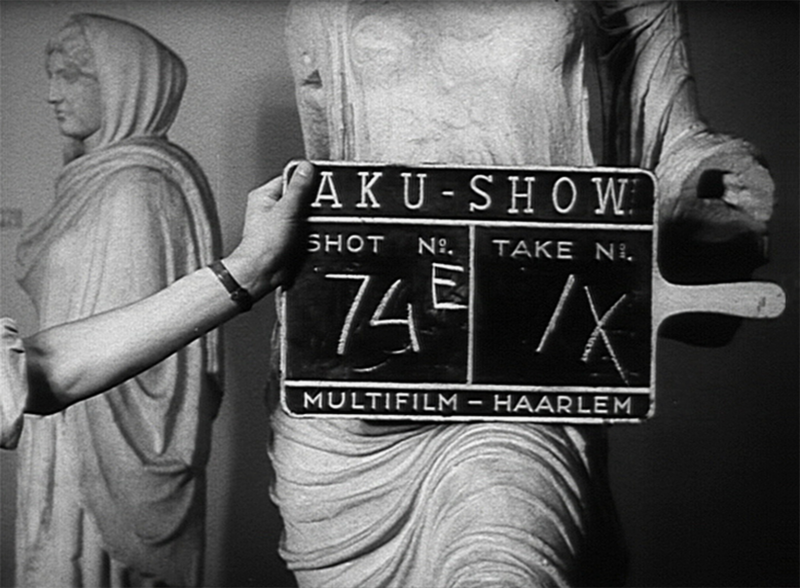 In the Meisterhaus Moholy-Nagy, Christoph Girardet presents two works in juxtaposition – much like model and ruin, or the negative and the print in analogue photography. The Eternal Lesson (2012) features the rushes from an unfinished film from 1939 showing art students working in the studio and museum. Many sequences were reshot time and again with only marginal differences. Girardet screens two near identical sequences simultaneously, thus initiating a running comparison between model and execution, ideal and divergence. Fabric (2014) also makes use of historical material: here, footage from an industrial film about synthetic fibres from 1949. The final cut has been lost. Girardet has edited the surviving discarded footage into a chronological sequence including the clapperboards punctuating each take. By necessity, this film will always remain a ruin yet it exposes the techniques and methods of film production itself.

DH: A great deal of your artistic work takes found footage as a point of departure. Though I’m not really sure about it, as it would imply that you react to things that you find. – Are you searching for something particular or just out taking a walk?

CG: I’m rarely just out taking a walk. Sometimes I set out on an aimless search, and it’s not at all clear what I’ll find. Fabric and The Eternal Lesson are the best examples of this. I had the opportunity to look through the archives of the Eye Filmmuseum in Amsterdam. I had an objective but initially I had absolutely no idea what that objective was. You hope to chance upon something, and maybe a certain stubbornness forces you to find something.

On the other hand, sometimes in the course of focused research you stumble across material that is interesting but useless for the project at hand. This material hangs around waiting to perhaps be explored at some point in the future – or it doesn’t.

DH: Your utilization of individual images or sequences from existing film footage is to me comparable to juggling spolia. In Silberwald [Silver Forest] you’ve extracted specific images and figures with a similar function from different films and blended them into archetypes – mountain panorama and deer vs. poacher and the woodman’s wife. What’s life like in a quarry that contains an utterly endless number of images?

CG: Silberwald is characteristic of a project that involved a targeted search. It’s a kind of survival strategy within the quarry. Before the work began there was a predefined limitation to specific motifs from a very special film genre during a particular era. Since the so-called Heimatfilm is very present in the German media and has been the subject of academic study for decades, the research was time-intensive but not difficult. I had an idea what I was getting into. The challenge for me was to identify some kind of quality in the material, ideally to inject it with meaning, which was extremely difficult considering how interchangeable the images are.

I’m not sure if the definition of spolia can be applied to something produced in such an industrial manner. In contrast to exceptional fragments of long-since vanished structures, these film fragments are merely copied parts of films that are still intact, and are by no means one of a kind.

DH: Both the Heimatfilm that we just talked about and the scientific film, the narrative of which you plundered for Synthesis, are vast landscapes of ruins, essentially obsolete. Is it possible that precisely by utilizing obsolete material you generate a kind of timelessness?

CG: A significant number of the images in Synthesis come from films commissioned by the chemical industry, so these are promotional, pseudo-scientific commercial films. The 1960s were the golden age for this genre. Certain design vocabularies and strategies of promotional films still haven’t changed. They always feature what is assumed to be a widely accepted consensus, for example a classical idea of beauty. But this also explains why even the most toxic substances have to look really good. For this reason an obsolescence can be found in Synthesis more in the ruinous condition of the film material, in the aesthetic of patina, in the colour errors, paleness, dust and spots. Surfaces appear corroded, the celluloid is damaged in places. The patina suggests an interplay between the chemicals portrayed and the worn material, though this wasn’t intended by the makers. Maybe a timeless, banal, yet indeed existential insight manifests itself here, as processes of decay are not just cultural and historical revenants, they are real and cannot be held back.

DH: In Fabric three alluring women in new clothes made of synthetic fabrics make their way through the film studio. Exquisite replicas of antique figures serve as accessories and every now and again the handsome tailor appears as well. One might think we’re dealing here with the incarnation of Winckelmann’s aphorism: “noble simplicity, quiet grandeur”. Every now and again we hear a beep. Similar to the battle for Laocoon’s arm, with Fabric you engage in speculation – about what?

CG: The work that will be presented in the exhibition Model and Ruin in Moholy-Nagy’s Meisterhaus is based on a film from the year 1949 that was directed by Paul Schuitema. His primarily graphic work was very much in line with the Bauhaus tradition, even as early as the 1920s. He had a decisive influence on the aesthetics of modernity in Holland. He was also a very interesting filmmaker. For the most part he made independent short productions.

This film was a commissioned work from shortly after World War II, a commercial film about the manufacturing and sale of synthetic fibres. Fabric utilizes film material that was discarded. At the Eye Filmmuseum in Amsterdam only the leftover material not used for the working copy is to be found. It’s very likely that not a single copy of the final version of the film still exists anywhere. Yet the discarded material is also quite revealing. The clapperboards and their numbering make it possible to piece together the storyboard, at least fragmentarily, and from the many takes filmed for continuity and repeated several times, of which only one made it into the final version, it’s possible to surmise how the film was edited.

In contrast to Laocoon’s arm, here I was not interested in reconstructing the film as precisely as possible using existing alternative takes. The conceptual approach to Fabric follows a contradictory logic – the inversion or negative form of the lost film. I arranged the remaining material, I mean all the repetitions including the clapperboards and brief camera tests, as well as the takes that were interrupted because of mistakes made by the actors or camera errors, according to their consecutive numbering. Often pieces are missing, though the footage before and after the take itself still exists. If a passage is missing it can be assumed that it was used in the working copy. In Fabric the gaps left by the missing fragments are now closed. The material before and after a take is added in direct succession. These seams are indicated by short beeps, providing a certain structure to the film woven together in this manner, which otherwise doesn’t have a soundtrack. Between the depiction of the production, the processing and that of the supposed sensuality of synthetic fibres, representation processes emerge that are for their part also extremely artificial: the processes of cinematic dramatization.

The reconstruction method is more relevant for the second work of mine in the exhibition, The Eternal Lesson. In a purely speculative manner, I have edited two extremely similar but by no means identical variants of a film and placed them side by side. The images are taken from the raw material for a documentary film from the late 1930s that was never finished. The Eternal Lesson explores the idea of originals and authenticity. The images show art students at work as they attempt to copy different models – a still life, a living model or the replica of a sculpture – as precisely as possible. While the students compare their works with these models as part of the creative process, the viewer analyzes the differences between the two films. As an infinite loop this “slave work” becomes a classroom session that eternally repeats itself.