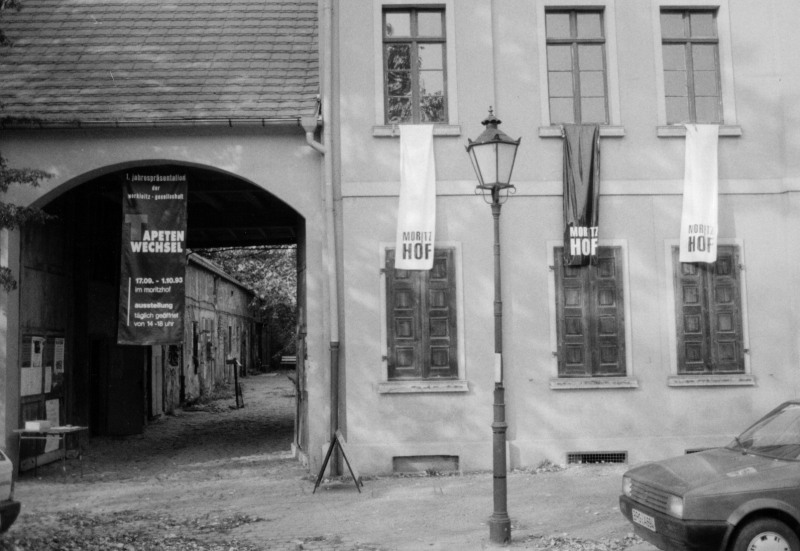 In order to establish and promote contact and discussion with the local film and art producers as well as to publicize the goals of the Werkleitz Gesellschaft (WLG), the WLG has decided on short notice to organize a first annual presentation. Its aim is to be an exemplary display of contemporary artistic possibilities in the border area of fine arts / moving images / new media. The idea is to establish a forum called “Werkleitz Biennale, which engages with the newest topics of current art discourse.

The first Werkleitz Biennale is titled “Change of Scenery”. The complexity of the term is intended to show both a change in cultural-political as well as artistic aspects. Engagement and confrontation with new media is becoming more and more popular in the so-called traditional art genres as is the development of independent forms outside of the popular entertainment industry.

The works of the 41 participating artists and groups from all over Germany show a diverse spectrum of this discussion. The program ranges from film and video productions, video installations, performances to fine arts to classical and modern music.

The WLG hopes that this event will also arouse the interest of the artists from Saxony-Anhalt, so that in future events especially the regional artists have a greater emphasis. The complex exhibition program is possible in this context because the participating artists and organizers waive any fees.

In cooperation with the Kellertheater Magdeburg e. V., the initiative group Moritzhof, cinema suspect e. V., the Magdeburg city magazine “citadel” and the Ministry of Culture of the State of Saxony-Anhalt will present new unusual combinations of individual genres, which come together in Eastern Germany for this first annual presentation. Werkleitz, September 1993.