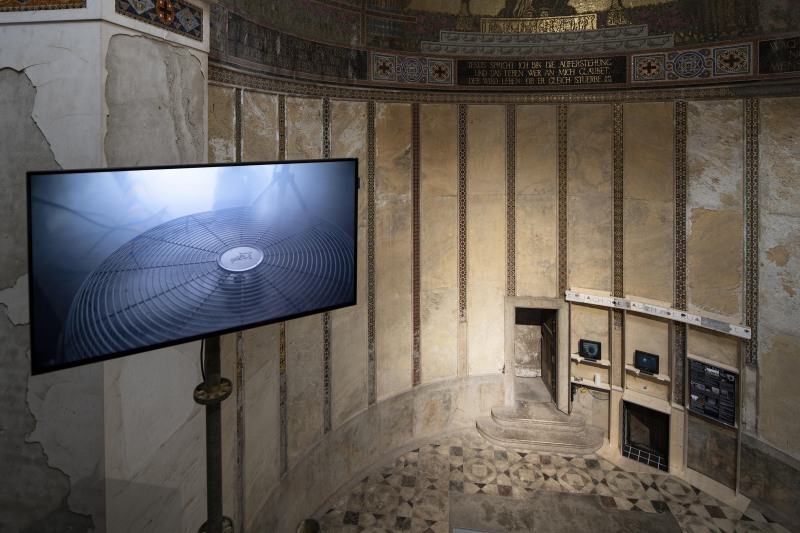 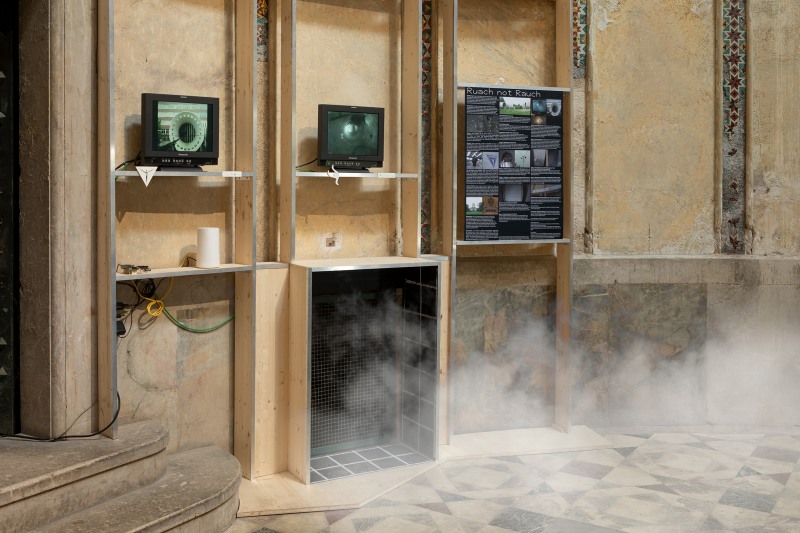 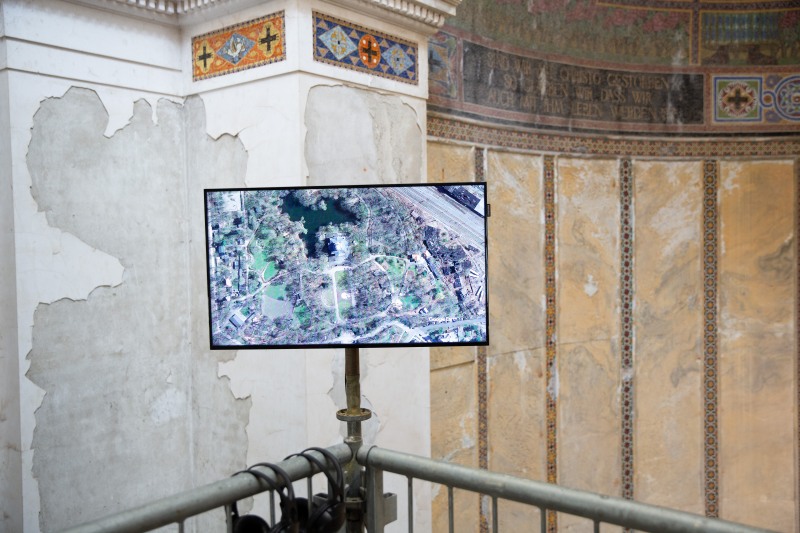 Haseeb Ahmed’s light and sound installation Ruach not Rauch takes as its theme the ventilation system of the Mausoleum in the Georgium and also the ruins of a wind tunnel on the site of the former Junkers aviation plant. For the artist, it is the element air which provides the ethereal connection between these two historic sites. The Mausoleum’s ventilation system – for which Junkers supplied a heating unit – served to preserve mortal remains, to sustain the past. In 1936, wind tunnel aerodynamic simulations, following the expropriation of Hugo Junkers’ assets by the Nazis, paved the way towards total war – the obliteration of all life.

In Hebrew Ruach means wind, breath, spirit. In the Hebrew Bible, the Tanakh, the term often denotes the breath or actions of God. Ventilation shaft and wind tunnel, the bygone commemoration of the dead and the war fever of the past: all are re-awakened by Ruach not Rauch, laying bare their fractured, multilayered narratives.

AK: In a great solo show last year at the M HKA Antwerp you presented The Wind Egg, the third and final step of a trilogy that also formed the work of your PhD in practice-based arts. In the center of the immersive installation was a state-of-the-art wind tunnel through which the visitors could walk. For Model and Ruin you also want to work with a wind tunnel, this time the ruin on the former Junkers site in Dessau. Where does your fascination for wind tunnels come from?

HA: The wind tunnel is a threshold, meaning everything that moves through the air (vehicles), or moves air through it (engines), or moves a substantial amount of air around it (buildings) must pass through a wind tunnel before entering our industrially produced world, yet we rarely see or hear mention of it. Revealing it as a form-giver can alter the way in which we see that which we accept as natural. This makes the banal available for poetics.

My work with wind tunnels began ten years ago in 2008 when I produced the artwork Shamshir + Wind Tunnel = Progress in the MIT Wright Brothers’ Wind Tunnel while in the Program for Art, Culture, and Technology. I placed a replica of a Persian shamshir sword in the wind tunnel. Instead of the sword cutting through the air, air moved past the sword at the speed at which the sword would normally cut through the air. As a result the fleeting instant in the swing of a sword was extended infinitely, or as long as the wind tunnel was on. This is a moment, and the configuration of time and space within it, could only be possible in a wind tunnel. I began to think of it as a performer, or following the Russian Constructivists, a machine as comrade.

AK: In your collaboration with the research group Size Matters at ZHDK (Zürcher Hochschule der Künste) the wind tunnel was described as a kind of meta model insofar as it is a model of streaming conditions that allows to optimize other models which are built to perform under these streaming conditions, like e. g. airplanes. Can you elaborate a little more on this question of the specific operativity of wind tunnels and their character as models that at the same time represent something and do something?

HA: We can never grasp the wind and yet it is constantly touching us. We cannot see the wind, only the way it affects things around us. The attempt to understand the perennially enigmatic wind engenders a whole human history of mythologies and also wind tunnels. My work mobilizes both of these facets.

Wind tunnels are made so that we may study atmospheric conditions. In this sense they are a model of our understanding of the atmosphere itself which then contains models of objects concerned with the movement of air. They do this by creating straight and uniformly moving air or laminar flow. Paradoxically, laminar flow exists nowhere in nature. Wind is ever turbulent, a favorite subject of chaos theorists. In their modelling of our atmospheric conditions wind tunnels create a reality that only exists in wind tunnels. I call this reality the “Wind Tunnel World”. All models contain a similar paradox, they are that to which they refer and something in and of themselves at once.

The scale models of objects that would normally move through the air are held stationary while air is blown past them at the velocity at which they would normally travel. I find this inversion of space and time very seductive. Space is eliminated and time becomes arbitrary. The only constant that remains is velocity, which normally would have been derived by the relationship of two.

Scaling was a major focus for us in the Size Matters group. It is almost always needed between the model and its referent. However, this scaling is non-linear because the air has a fixed density and is experienced differently depending on the size of an object. For me this non-linear scaling implies that different realities can exist at different scales simultaneously. To resolve their relationship the abstraction of mathematics is needed. The Navier-Stokes equation contains the possibility to describe all properties of the wind but it is as still unsolved. For aeronautical engineers the wind tunnel is therefore a calculator by which qualities generated in experiments can be converted into quantities.

AK: Hugo Junkers, during his early years in Dessau, developed the idea of a gas heating device from his studies of thermo- and fluid-dynamics. Everything else, namely the airplane technology for which he was to became world famous, derived from this occupation. Among his first orders in Dessau was the installation of a gas heating system in the cellar of the newly erected Mausoleum. Its purpose was to provide for the circulation of air in the air ventilation shafts in times of cold and dampness. This ventilation system as well as the wind tunnel at Junkers is derelict. The wind tunnel was built to conceive of new airplane technology, the Mausoleum to house the corpses of dead people. In your planned work you want to re-animate and connect both structures by letting the same wind blow through both of them. Do you see a spiritual dimension in this undertaking?

HA: In my work I often try to bind together things, which we normally take to be opposites or unrelated. This strategy of triangulation is an attempt to throw the latent qualities of our slippery present into relief. This kind of connection is made through a single flow of air through the two structures of the wind tunnel and the tomb. The connection is strengthened by the crypt’s very large ventilation shafts – which too are wind tunnels of sorts. Ruined by the allied bombing of Dessau in WWII, both structures also share the same fate. Insofar as the wind tunnel in the Junkers complex was used to develop military aircraft for the Luftwaffe, it can be associated with death just as the tomb already is.
On the other hand, wind has a deep association with creation across many cultures. Creation is described in the Bible in Genesis. All that existed before our reality was a void of dark waters. The breath of God, known as Ruach in ancient Hebrew, blew over these waters to initiate creation itself. Breath comes even before light and subsequently flows through all living things. The ancient Greeks believed that a gas known as Pneuma filled our bodies enabling thought and emotion. Ruh means soul in arabic while Raha means to breathe. In many instances this internal flow within our bodies relates to conceptions of the flow of time (i,e. Kairos), linking our individual fates to a larger order. To restore the flow of air through the tomb and the wind tunnel simultaneously brings these ancient and modern world views on life and death into dialogue.

AK: The constellation in Dessau in the 1920s and early 1930s, which aligned a progressive leftist government with a progressive industrial enterprise and a progressive art and architecture school, has been repeatedly described as a lucky moment in history. Retrospectively, it is connected to peacetimes and civilian progress. Nevertheless, the technologies conceived of delivered the basics for later wartime developments as well. The wind tunnel you want to reanimate was built in 1934, at a time when Hugo Junkers had already been forced to hand over his production facility and all his patents to the Nazi administration. Subsequently, his company, still bearing its founders prestigious name, who had repeatedly and publicly opted against the military use of his aeronautic inventions, was transformed into one of the largest manufacturers of wartime aviation technique in Germany. How do you deal with this historical rupture? Do you think it is possible to make a distinction between good technology and bad technology?

I respect Junkers’ resistance to the Nazis’ attempt to use his innovations as weapons. Nonetheless, in my opinion it is not possible to draw a distinction between good and bad technology because no piece of technology has agency of its own. Technology is a form of wish fulfillment. It realizes the desires we collectively hold. I found that thinking of the wind tunnel as performer was akin to the Russian Constructivists’ notion of machine as comrade. Under capitalism living labour (man) and dead labour (machines) are forced into competition with one another but it need not be this way. It is in this competition that machines are used to kill conscripted men who would normally be of a working class which Marx considered to have revolutionary potential. Today, in the absence of ideology to mobilize utopian visions we are left with a technocratic one. We now hope that technology will save us but only we can.

Scientific method relies on the model of verifiability. In order for a fact to be considered a fact it must be consistently reproducible in any place at any time. In order to meet this expectation the same lab procedures must be followed and the same lab conditions must be present. The paradox however is that all of these places are the same place, and hence may only be reproducing phenomena native to these homogeneous conditions and not to the outside world. Nonetheless, the domination of the model of verifiability contains within it a rational kernel of utopia. It is the closest we have ever come to universality. Yet, it expresses itself as ubiquitous banality. Part of my attempt is to provide new narratives and make this universal “fabric” available for more creative conceptions.

This universal fabric weaves together our lives. For instance in this case I can draw a personal line that makes my project in Dessau a type of return. For it was the educator, designer and artist György Kepes of Bauhaus Dessau who founded the Center for Advanced Visual Studies at MIT where I graduated and made my first wind tunnel artworks in 2012 in the Wright Brothers’ wind tunnel which is a kind of nemesis to the one I am now working in at the former Junkers factory complex.