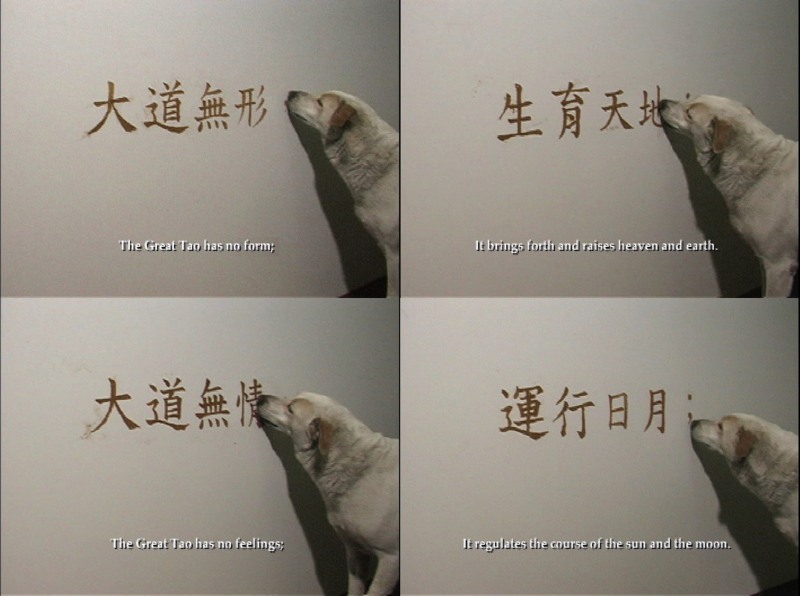 In the 20-minute video where the camera is stationary, a dog comes into frame and hungrily licks the blank white wall making reddish Chinese characters of a traditional Taoist text suddenly appear on the wall. The ancient texts refer to the dichotomous ordering of the world as everything has its defined set place: heaven is pure, the earth turbid, masculine is active, feminine at rest, etc. The texts also provide moral guidance on how to live a spiritual life uncontrolled by one’s carnal desires. Taoism tells its followers to accept the universal truths about life, to go with the flow and to get to one’s essential and original nature, something that dogs naturally and effortlessly do already. We really like and appreciate dogs for their dog-natures, for them just being themselves: dogs. So what better model is there than a dog, who is basically Taoist in temperament, to reveal the Doctrine of the Principle of Nature?
(Susan Kendzulak)

For Hung-Chih Peng the dog is linked with a multitude of meanings. He does not limit himself to depicting dogs, but rather presents the world from a dog’s perspective. A complex reference system is built up around this private cosmos in the works, turning the dog into an ideal projection surface for analyzing social structures or economic circumstances. His equally refreshing and irreverent appropriation of different cultural traditions and aesthetic codes imbues his conceptually focused work with a playful note, making it accessible to a wide audience.
Courtesy of Gallery Virgil de Voldère, New York NY
www. virgilgallery.com