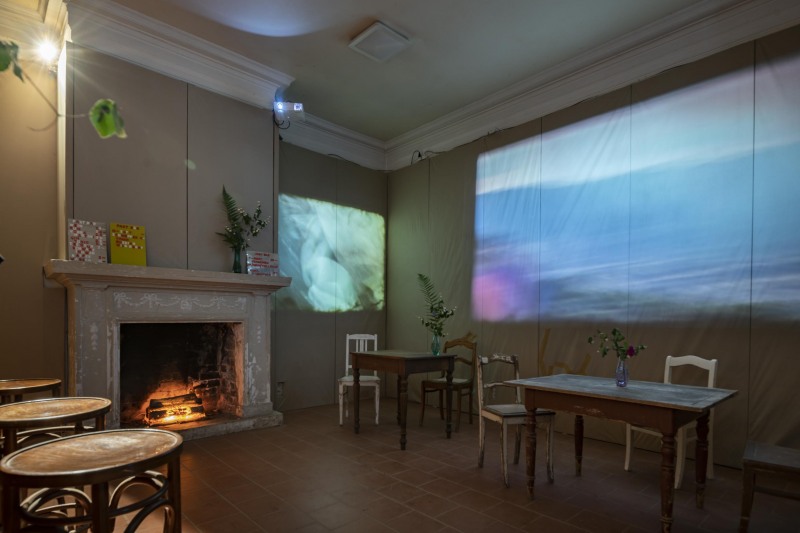 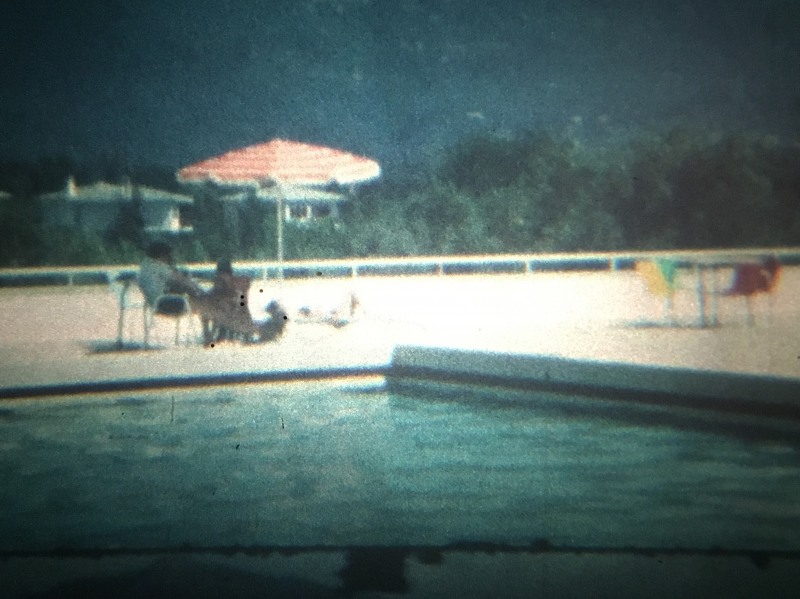 The Past Bar by Holmer Feldmann featuring Piotr Baran is all about forgetting. A host of celebrity authors show excerpts from a huge collection of holiday movies and material possessions personal to them. A boundless archive of apparent trivia in which images and objects are superimposed – digitized copies of Super 8 films provide the backdrop to a countertop from a hobby basement, Biedermeier tables and nut bowls. The Past Bar – which during exhibition opening hours will indeed function as a bar – is not a constructed ruin but rather a model in ruins. This model of transience is fated to destruction as it does not convey a true memory or authentic moment but rather presents distorted images and margin notes. Like every model it omits, abbreviates and reduces information. What remains? The impossible undertaking known as memory – Total Recall.

AK+DH: You are artists and collectors. Your collection seems to be half design shop and half equipment depot, a storehouse of different 20th century artistic trends and an archive of everyday archeological objects. Holmer, a critic once said that your work method consists of yelling into the archive and registering whatever comes back. How far into the past does your inventory go and which part of the collection answered when you yelled “model and ruin” into it?

HF: The Beuys collector Franz Joseph van der Grinten once said that he wasn’t interested in collecting but in stockpiling. At least that’s how I remember it. And that’s how the collection was put together. By stockpiling things. There were always letters and postcards, photos, negatives and Super 8 and regular 8 films, roughly from the past 100 years.

PB: If a person takes a picture or makes a film in order to remember something, he or she attempts to capture a moment, another person, a “touristic highlight”. From my own experience I have to say that this attempt is destined to fail, with one exception: children, the up and coming generations detached from the ego. Everything else is inevitably painful. In the course of time the shutter released at the present moment only confronts one with one’s own decay and the resulting loss. The films from Past Bar are in this sense models and ruins at the same time because they are failed projections.

AK+DH: The pictures and artefacts from the Mediterranean, which you explored in your work on the Past Bar, make up the primeval mud of a technically generated and processed touristic treasure trove of remembrances. From the yearning for Italy and Greece of the classical and Romantic periods to the summer vacation now finally possible for the so-called little man on the beaches of Jesolo or Rimini, and in the decades after the war all over the world. What does this “Italy” mean to you? What role does tourism play in your work?

PB: We made the conscious decision to cut out every tourist sight from the material in order to steer clear of informative platitudes. Everyone knows the Acropolis and it transports nothing besides the information that it is the Acropolis. The Acropolis is indifferent in the past, present and future. It doesn’t change, it doesn’t live the way cars rust, streets expand or humans love one another. The touristic element is irrelevant. I would like to return instead to the aspect of collecting, which is really a search. The Italy that we mean is not geo-political in nature; it can be a light, a mood, a misunderstanding. Anywhere. It can also be your own memory, which you’re searching for, or non-memory.

It is to be assumed that our memory is orange. As babies, as unshaped creatures, we all lay in some kind of bed. And over this bed usually hung a lamp. Was that the kitchen? Light streamed through our closed eyes and it was warm and reddish like the blood in our eyelids. Then came the stories, geographical data, and events, which we still believe.

HF: Film and television are full of products that tell of memories. That’s not what Past Bar is about. Old slides and films as memory aids are crutches and don’t work for me either. The photo of a situation doesn’t elicit much more than what is there: the photo. The touristic view is almost never individual. However we searched for the individual in tens of thousands of slides and hundreds of films. The quintessence of the film search are the images to be seen in Past Bar: with recognizable “points of interest” eliminated, freed of excessive static (the filmed slide show), no longer as mainstream, a little more individual, in some cases very short, so that the briefness indicates omission.

The “yearning” that you cite has more to do with travel itself. By which I mean: “being-somewhere-else”.

So in the Past Bar Super 8 and regular 8 films are played, two to three projections of different sizes and run times are shown. Maybe some films will be played in their entirety, while in another projection they are “disrupted” by a programme by Piotr Baran, or their sequence is modified. It is always primarily about the bar as a place to drink alcoholic drinks and coffee (and to eat a few olives or little snacks or chips) and at the same time: it’s about time! It’s about leaving the world behind, forgetting. Then we can answer your questions in peace …

AK+DH: A peculiar and unusual architectural phenomenon that played an important role in the early modern age and that was an inspiration for us in developing this project is the constructed ruin. A place that pretends to be the relict of a past golden age that, however, is entirely intentionally put in place for use at the time of its construction as a conceptual or emotional figure. Would you describe the Past Bar as a constructed ruin? Can the bar endure beyond time and what endures inside it?

PB: Most of the people that appear in the Past Bar projections are now dead. Maybe they would prefer it if by means of special software they were to be rubbed out of the films. Then only empty landscapes would reel past us, the ruins of their lives, conceived back then as a short-lived private memory, now a monument that like all monuments is dedicated to transience. But we chose life instead. In the Past Bar everyone is back again: a kind of after-hour party where an uncle and aunt, the cameraman’s wife and her lover, cousins and friends of the family are all standing around. At the bar or smoking in the lounge, puffing their smoke clouds into the light of the projector.

HF: The Past Bar itself will only be set up temporarily. In mid June it will be closed and dismantled. After that nothing and no one will be saved. It won’t be the kind of bar where you can just “show up” again. Maybe someone will get hooked and not be able to let go, someone who associates the Past Bar with the “best times of his life”, who stands there leaning on the tree behind the building waiting for it to re-open? For the purpose of your questions it would be wonderful if when the whole thing’s over a nice memory lingers. And no, according to our current plans the bar won’t be a constructed ruin but a ruinous model!