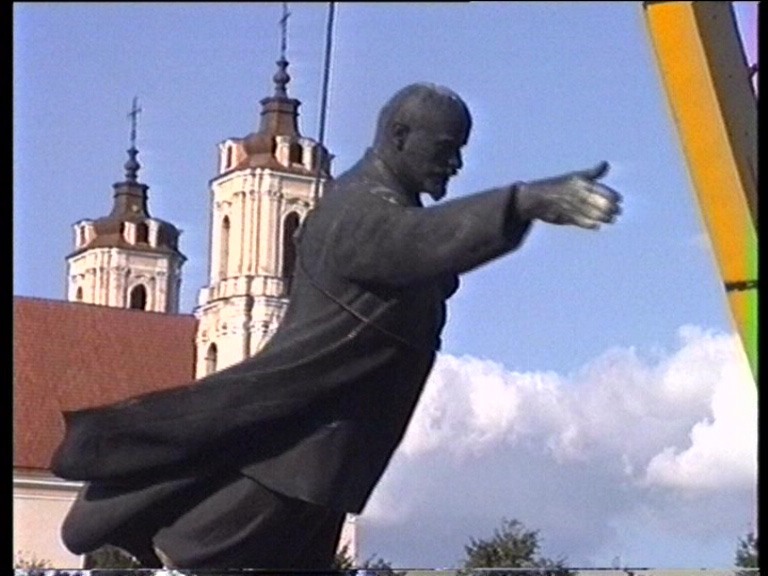 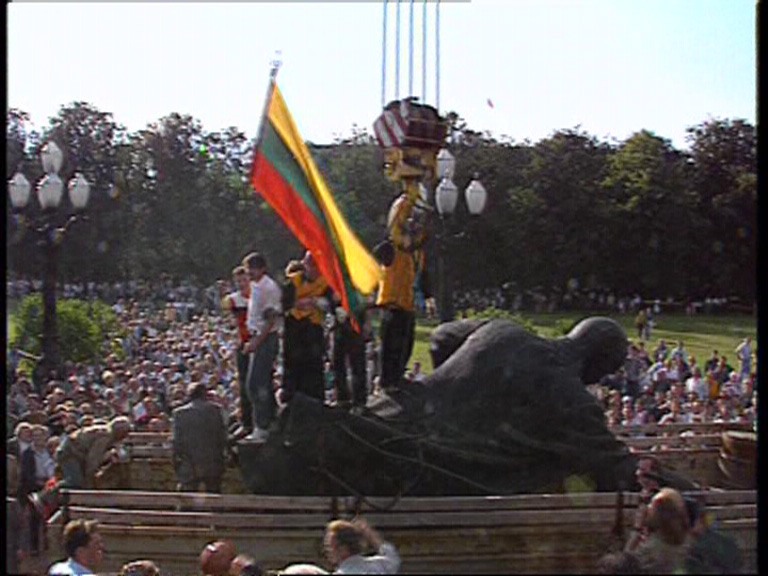 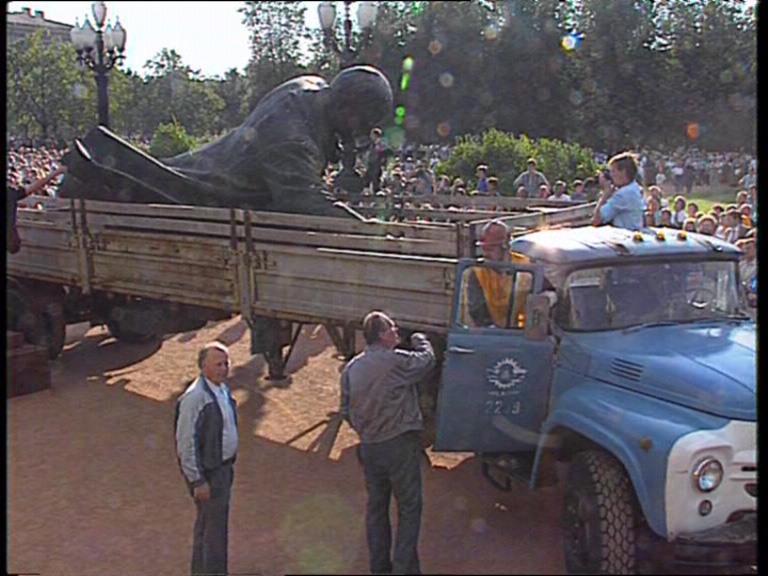 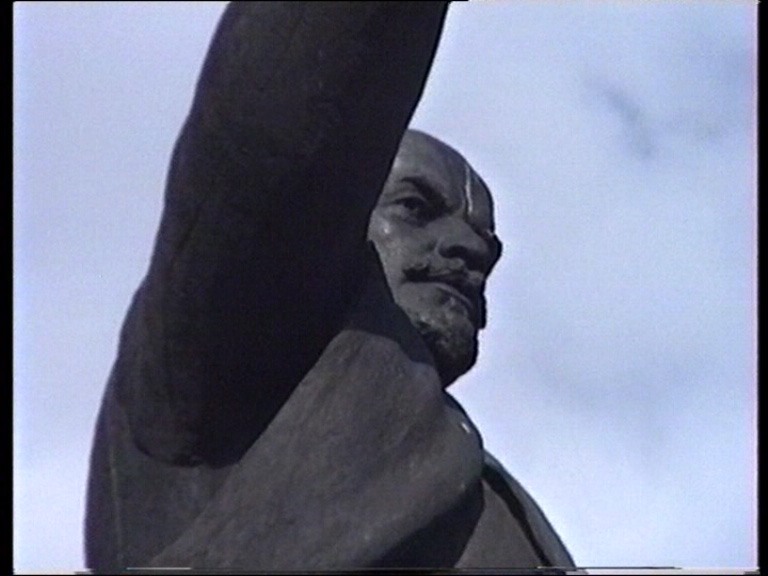 At the end of the twentieth century we can be witnesses of a miraculous event — on a public square in Vilnius, Lithuania, we observe the erection of a statue of Lenin. This unusual act in the video Once in the XXth Century (2004) by Deimantas Narkevicius resembles a public spectacle, applauded by a large audience. The usual strictly stylized celebrations for the ideological leader of the communist idea who turned Marx’s “religion is the people’s opium” into the propagandistic version “religion is opium for the people”, however, do not take place. The cheerful public festival proceeds without the state-prescribed choreography of quasi-religious rituals of adoration.
Deimantas Narkevicius used in his video footage of a Lithuanian TV station. This shows the taking-down of a Lenin monument in the 1990s. By filmic cutting, it was turned into the erection of the monument. After the majority of the socialist monuments were taken down at the end of the last century, either spontaneously or prescribed by the state, they now serve as only fleeting and dematerialized traces of a collective yet unfulfilled belief in a social alternative. With his ‘reversal of images’, Deimantas Narkevicius pulls the personality cult and the public installation of ideological symbols, which have long become history, back into our time.
The Lithuanian filmmaker thematises in his films the relationship between individual and collective memory, with the events in his homeland in view, taking as a point of departure his personal biography. Once in the XXth Century is an ironic commentary on the scenes of ideological manifestations ‘in stone’ that repeat themselves in the various political epochs, and the iconoclasms that follow them, meant as radical measures to correct history. History shows that the destruction, desecration, or removal of political relics of faith often lead to an unbroken reproduction of icons and forms of icon veneration. Thus the video does not just undermine the demanded believability of (TV) images from that moment on when a social order becomes history. It also tells of the exchangeability and depletion of ideological signs and rituals. 1
The destroyed remnants of a lost utopia can also be found in the film The Role of a Lifetime (2003). The film shows how Soviet monuments, stripped of their former representative function, are displayed like decommissioned veterans in a bizarre theme park in Lithuania. The closed electric power station in Energy Lithuania (2000), once a symbol for the communal belief in socialist build-up and progress, is in these images only a ghostly site, an immense echo of a failed utopia.

Text by Angelika Richter (On Icons, Idols, Avatars, and Other Proxies)

1 The film Disgraced Monuments by Mark Lewis and Laura Mulvey is a work that describes an aspect of Russian history as a succession of monumental veneration and subsequent destruction of buildings and monuments. The alternating erection and destruction of political and religious architectures in accordance with the respective ideology reigning at the time on a Moscow square within a century is traced with the aid of documentary material. The erection or rather destruction of the Lenin statue in Once in the XXth Century happens against the foil of the Catholic church SS Jacob and Philip in the background, which survived the eras of the Soviet Union and post-communism unharmed.