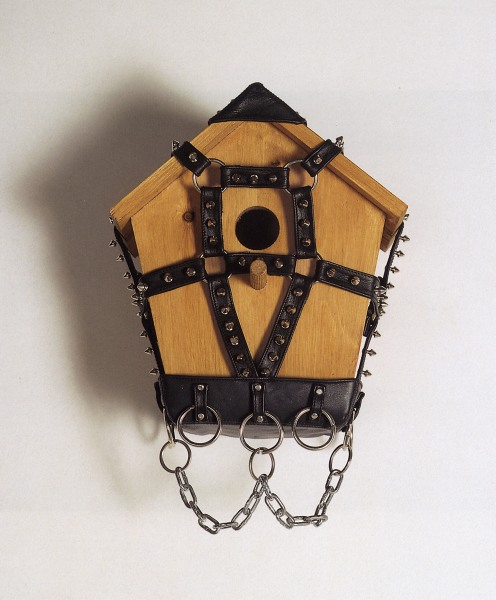 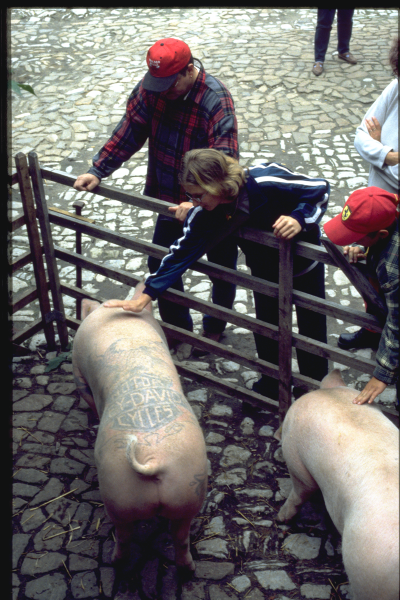 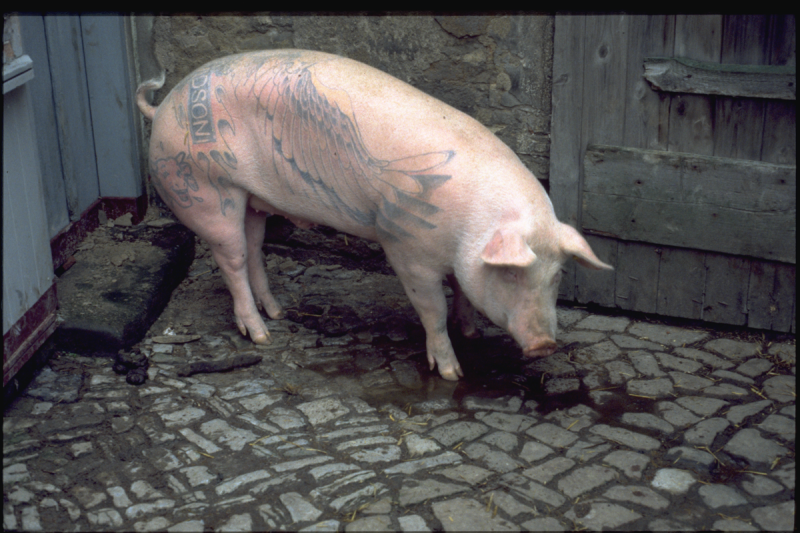 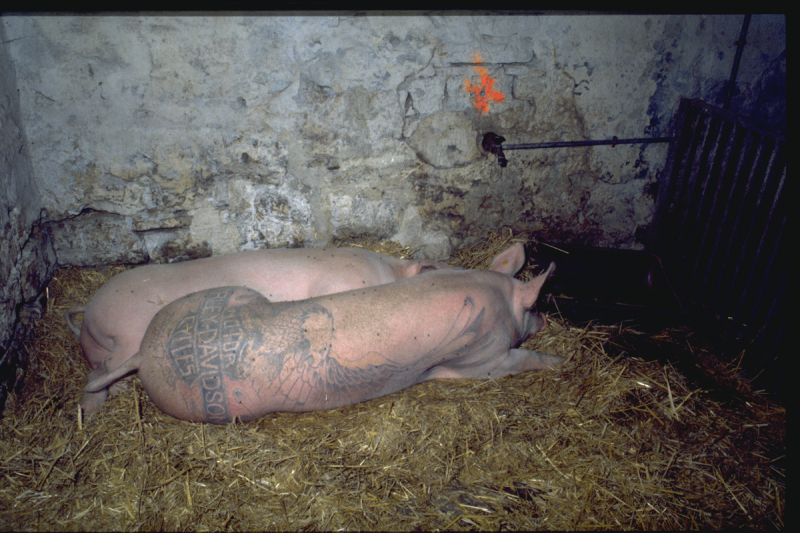 The inner yard of the Local Culture and History Association leads to the currently more or less disused sheds, store rooms, stables and the old farm barn. Wim Delvoye has placed his contribution to the exhibition of the 3rd Werkleitz Biennale in one of the stables here: Two live pigs, eight months old and weighing approximately 90 kg. One of the pigs has large tattoos on its back and hindquarters. These show the motifs with which some bikers demonstrate their lifelong love of freedom (which can be found on a Harley Davidson) or their hatred for a world they see as „square”. Whether they are decorations, statements, personal scars or protests, tattoos are always a manifestation of (desired) differentness and alienation. Those who have tattoos on their faces, for example, – a part of the body which cannot be hidden – build clear barriers between themselves and the society they live in and characteristically will no longer be able to find work in this society. Tattooing a living pig – a domestic animal and producer of meat for humans and a word used to insult people – (and especially with the war-like emblems of rockers) and then to send it with a touring exhibition as a piece of art is extremely perfidious for many reasons. This is not only because, when placed next to the „normal” untattooed pig (which accompanies it on all its travels), it suddenly appears naked. Although the pig was tattooed with a minimum of distress and under the best possible veterinary conditions, this „work” of course constantly causes outrage among animal rights activists („Cruelty to Animals as Art”) and thus sparks general discussions about the relationship between humans and (factory-farmed) animals. In contrast to some of the earlier exhibition venues for Delvoye’s art pig, in which a sty was built in each White Cube, thus underlining its extremely artificial nature, the pigs displayed at the Werkleitz Biennale in a „fitting”, rural environment. However, this serves to increase the contrast between the „humane” and the „inhumane”, that is between the „normal” and the „perverse”, since tattooing is a cultural technique which we see as urban and the tattooed tend to be outlaws – or rather outcasts – of this urban context.

Wim Delvoye’s second work operates in a similarly perfidious way. On an outer wall of the inner courtyard hangs a „Nestkastje”, a nesting box for birds, which has been squeezed into a suit made of studded black leather that reminds us immediately of the accessories of Sado-Masochistic sex. And, of all places, the entrance for the bird that may brood here, is surrounded by a typical, heavy chrome ring which holds together leather straps and, in such sex aids, serves to emphasise certain body parts. We could now make frivolous speculations about the inhabitant of this little house, in the same way as we can speculate about private practices that go on behind our front doors. Who is the wearer/ user of this leather corset? Once again Delvoye uses an „uncivilised” animal to explore both secret and publicly displayed cultural indicators which generally stand for unfathomability and social perversions, which are at least somehow seen as negative and which awaken moral judgements in the observer. Although Delvoye’s works are much more spectacular in this respect and darker in their humour, there is an obvious proximity of content and method to Susanne Bierwirth’s contributions.