IPHONECHINA – if Apple was a state, would you rather live there or in China?

▶
Utopien vermeiden Ausstellungsparcours
IPHONECHINA – if Apple was a state, would you rather live there or in China?
DE 2013
Christian von Borries 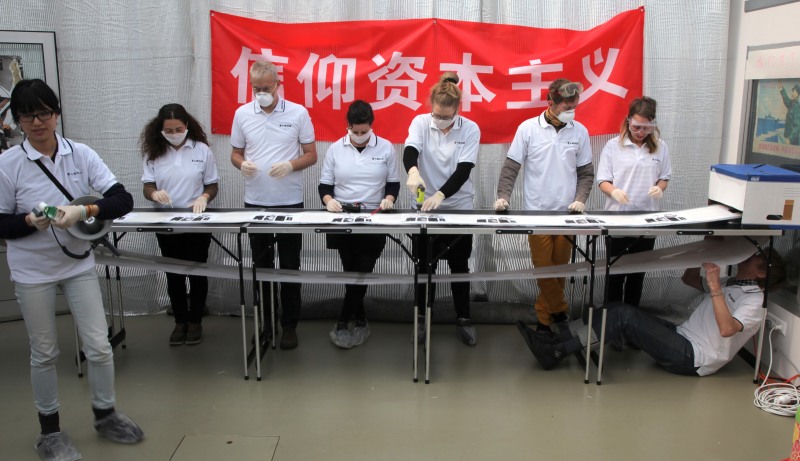 IPHONECHINA – if Apple was a state, would you rather live there or in China?, 2013, © Christian von Borries 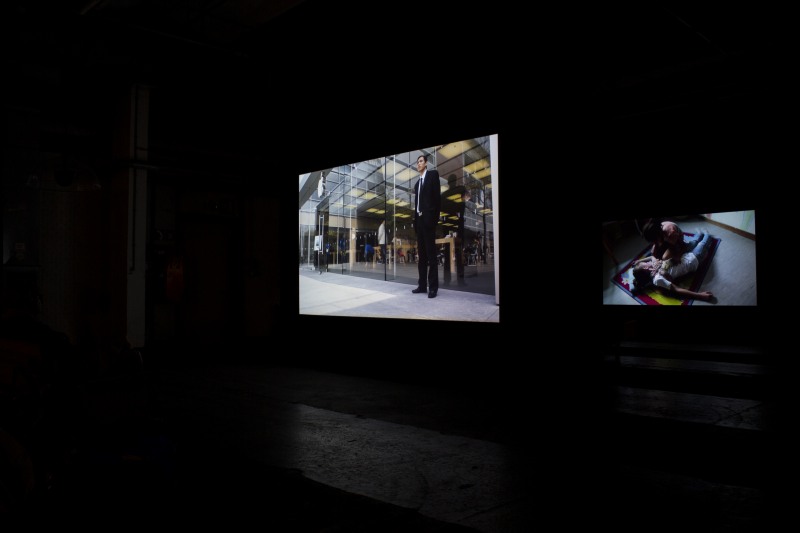 IPHONECHINA – if Apple was a state, would you rather live there or in China?, 2013, © Christian von Borries (Im Hintergrund ist die Arbeit "My Throat, My Air" von Loretta Fahrenholz zu sehen)
© Jeno Eugène Detvay

„The Future is here.“

Imagine Apple is a state. Would you rather live in Apple or in China? Christian von Borries poses precisely this question, which one is inclined to find absurd at first, in his documentary-essay film IPHONECHINA (69 min., 2014). How could one live in Apple? Apple is a company, not a state. And what does that have to do with China? To get it clear from the start, IPHONECHINA is not an investigative film about the exploitative working conditions at Foxconn, Foxconn being the Chinese producer of Apple‘s iPhone, which has been receiving bad press in the last years thanks to the high rate of suicide among its employees. Foxconn figures in von Borries’ film as the representative and symbol of an exploitative low wage sector spreading worldwide. While this work provides young Chinese workers a modest prosperity, the unbeatably low production costs allow the Chinese state to modernise into a state-capitalist system. High tech and low pay is the business model of this globalised world. As von Borries puts it, “For Apple, China is a market. For China, Apple is a huge job machine, although it exploits its workers.”

Apple, the largest corporation in the world, makes ten percent of its profits in the country with the world’s biggest population. Moreover, all Apple products are produced in China. The communist-capitalist state claims it’s on its way to becoming a “harmonious society”. Since the events at Tiananmen, there is an unspoken understanding with the population to the effect that if the latter abstains from political engagement the state promises to reward them with private wealth. Apple also has an integral vision for society, based on family, work and leisure; a society of propertied individuals without social responsibility. That’s why Apple censors the App Store, censoring by extension those plug-ins that can be used for public activities. In both cases, China and Apple, the relative subjective freedom is joined to an unspoken threat by a hierarchic and inscrutable system. Apple and China, as well as all democracies, distract us from political action. The depoliticised “user” corresponds to the depoliticised citizen, to whom arbitrary rules of cooperation are dictated, to be subject to surveillance by software and hardware. It is no accident that IPHONECHINA was filmed in the USA, France, Germany, and China.

Von Borries also asks: if states are run like companies, are companies run like states? With both Apple and China, von Borries is interested in the interaction between design, laws and the promise of salvation,1 in the way laws inscribe themselves into design and how design in turn affects society. “Design is how it works.” The West likes to depict China as a brutal surveillance state that suppresses any criticism and opposition by means of strict censoring and draconian police measures. While much of this is certainly true, von Borries asks whether Apple is any better in comparison. What kind of state would Apple be if it were a state? Can the way Apple behaves as a corporation be translated into the acts of a state? If Apple were a state, would it also be a repressor of criticism, a censor, a police force?

In 1971 George Lucas made his first film, THX 1138. This sci-fi movie shows a society living under the surface of the earth subjected to total control and continual surveillance. Humans are sedated with drugs and conditioned for smooth functioning and labour. It is not apparent who is in power in this technocratic society, nor is it clear whether those in power are humans or machines. IPHONECHINA contains a small quote from this dystopian film: the main protagonist, THX 1138, has just been arrested for repeated infringements of the law. He is in a detention centre for the mentally maladapted, i. e. the opposition. The space is completely white, as is the convicts’ clothing. Neither the floor, the ceiling, nor the walls are discernible, let alone an exit; everything is perfectly white.2

George Lucas succeeded here in presenting an exceedingly precise depiction of the paradigm shift that today is becoming a reality, the shift from the enclosure milieus of the disciplinary society (Michel Foucault) to the smooth modulations of the societies of control (Gilles Deleuze). Transparency plays an important part in this new dispositif. The disciplinary societies described by Foucault are characterised by architectural enclosures (prisons, schools, factories, clinics), whereas in today’s societies such solid structures have given way to continual modulations. The “soft” structures are like a “self-deforming mould that changes continually, from one moment to the next”.3 This supple structure is characterised by three traits: 1. transparency (or invisibility, imperceptibility), 2. jmmateriality (as the connection between individual materialities), and 3. performativity (“Code is Law”4).

As opposed to Foucault’s prison, the walls of the imprisonment area in THX 1138 are transparent, i. e. invisible. The walls, the floor and the ceiling appear entirely non-existent. Regardless of how far they go inmates still find themselves in the psychiatric clinic. The patients have found nothing other than the “self-deforming moulds” of the control society. These creepy spaces are transparent, immaterial and performative, enclasping the body and objects moving within them at all times in a fine gauze or sieve, which alters from one mesh to the next. These permanently self-adapting modulations are invisible, transparent. They elude human perception, and yet since they are everywhere at the same time they are harder than all the previous architectural enclosures. The agency-endowed, performative structures have today become transparent, thus eluding our direct control. The invisible, immaterial law of the contemporary societies of information and control is the programming code.

If we had to choose between the world of THX 1138 and today’s China, most of us would probably choose China. Admittedly, in China virtual and real surfaces have also become indistinguishable, the real and the virtual increasingly morph into one another (a preternatural effect, which von Borries already examined in his earlier film MOCRACY – Neverland in Me from 2012). Yet in China power is not anonymous, as it is in THX 1138. Apart from that, the walls, ceilings and floors, prison walls and fences are visible. So we know they exist. There are also doors and windows, still.

In von Borries’ film, THX 1138 is the signifier for a world to come in which we all live in Apple. In this world everything is light and attractive, you wipe gently over a screen to order everything you want, music floats up, food is delivered, light dimmed. A camera is held almost too long on children playing in a Chinese Apple store, submersed in iPhones, exploring with children’s gestures the worlds of virtual games. You have to get them while they are small. They will grow up surrounded by attractive design that embodies the laws of a harmonious society.

1 Apple could just as easily be Nokia, Samsung, Google or Amazon. Though only Apple has so perfected its design.

2 It would be impudent to associate this with Luigi Colani’s Apple Design. Yet if the prisoners could see the contours of the walls they would discover nothing but Colani-like aerodynamic, biomorphic forms. Christian von Borries himself points out the white backgrounds of many Apple advertising videos.

4 “Code is Law” is from Lawrence Lessig: Code and other Laws of Cyberspace. New York 1999.