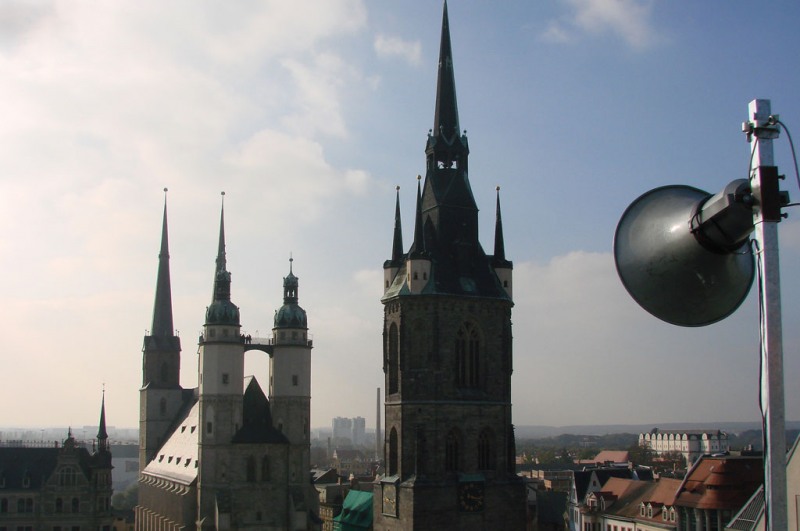 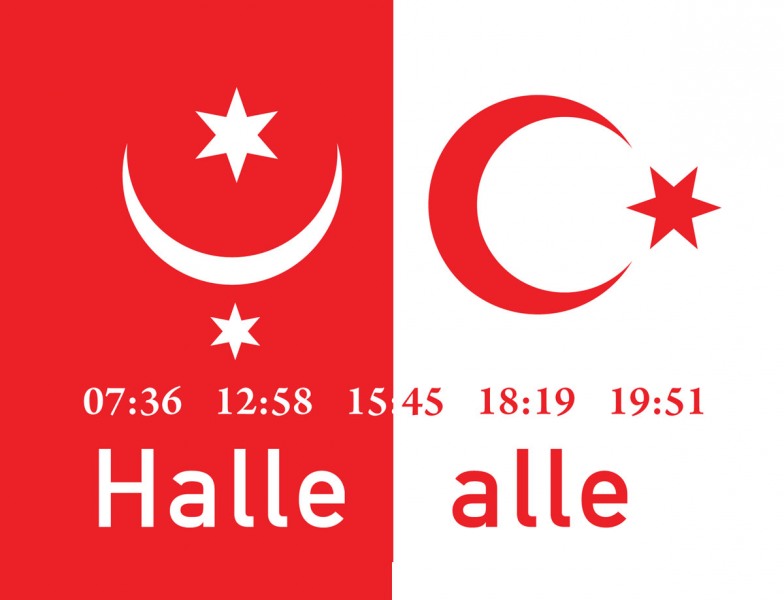 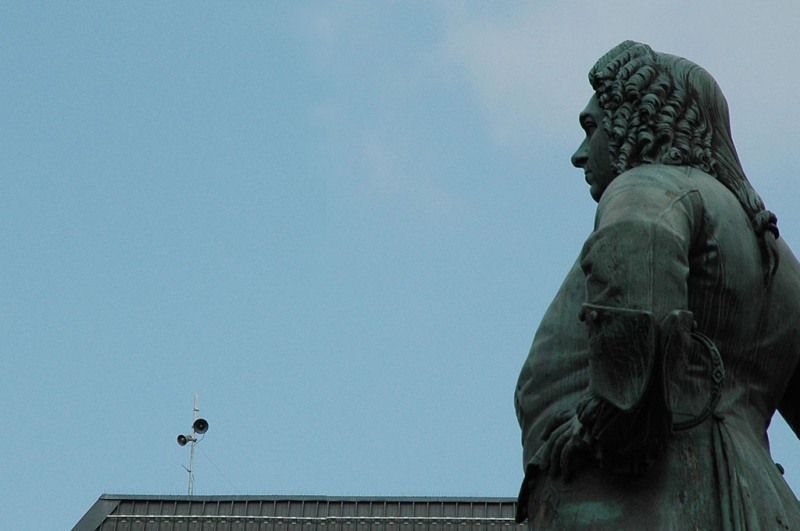 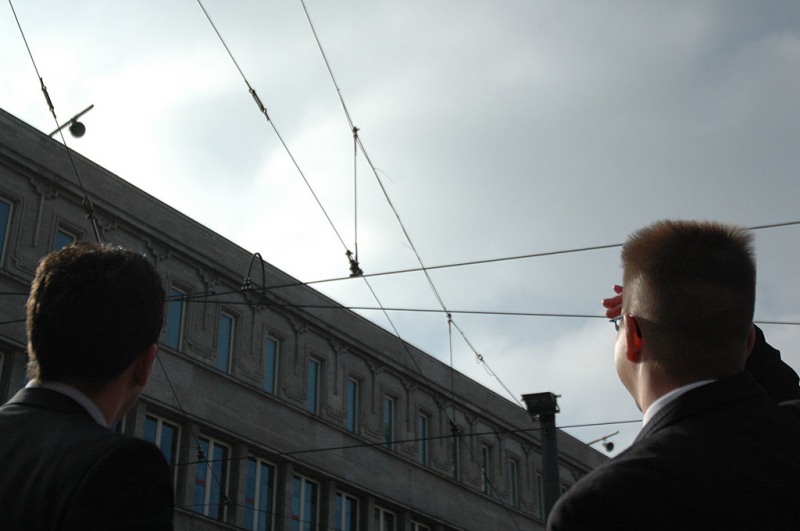 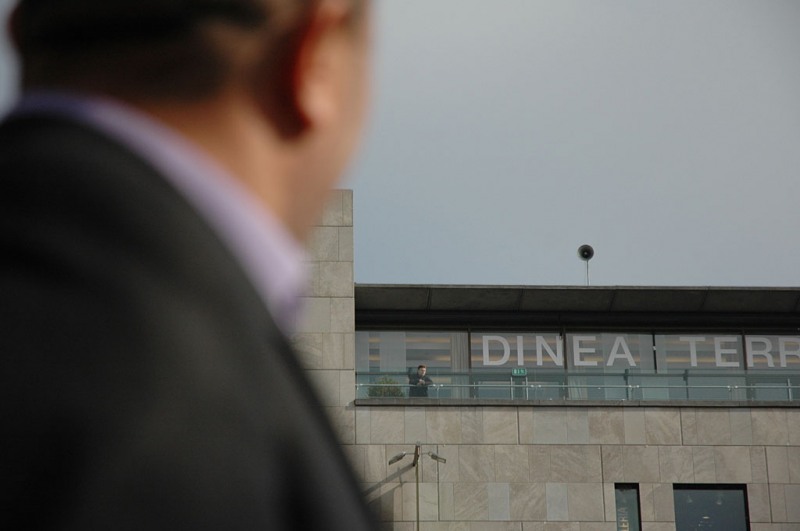 The highest point in a place is generally a sacred building that marks the centre of a local community: a church or a pinnacle of commerce – whereby these are not necessarily mutually exclusive. In Halle in central Germany, it is the Red Tower: a bell tower that still, five hundred years after it was built, is the highest free-standing bell tower in Germany. With its seventy-six bells it can even lay claim to having the second largest carillon in the world. It is a mighty index finger of God, an instrument that informs people of the time of day or extraordinary events, draws them to it and, at best, entertains them. In the framework of Fear Has Big Eyes, the Werkleitz Festival 2010, KUNSTrePUBLIK is launching a risky experiment that can – and very probably will – provoke all kinds of fears.

Islamophobia, unemployment, loss of control or, pure and simply, the unknown are fertile ground for doubts and fears or even for rage and aggression. Faith may be of help in this regard. Yet wherever faith rules the roost, there, of all places, fear often runs rife.  There’s no need to embark on a Holy War to figure that out. The border between feeling ill at ease and actual fear easily shifts and everyone oversteps it at least once.

It is still unclear what will happen when KUNSTrePUBLIK, instead of having the famous bells ring out in the centre of Halle, will have a muezzin read aloud statistical data from the tower, five times daily, to a set schedule, and thus convey information on the economic and cultural contribution of German citizens with a migrant background. Whoever has faith in statistics may apprehend these facts with religious fervour as an absolute truth. Yet doubts would not be amiss here either.  It is something of a relief that instead of the adhan – which is to say, the cry of “Allahu akbar” (meaning “God is great”), which traditionally precedes the Islamic call to prayer –  “Halle, Alle” (meaning “Halle, Everyone”) will be sung in the same manner as suras (Qur’anic verses) are, as a means to build a humorous bridge to the residents of Halle and visitors to the city. In this Christian rampart, the muezzin – who is a lay member of staff in an Islamic community, by the way – personifies the mediator between the spiritual and economic values and realms, and this, it is hoped, will alleviate local fears.

Yet, if the above will ever come to pass is still uncertain. For nobody knows what will happen when the project begins in summer 2010: whether the muezzin will ever climb the tower, or how people may react. Things look promising however, nonetheless … if one has faith in statistics. Eighty-five per cent of the residents of this former Hanseatic city profess to having no religious faith, and this assures Halle top ranking among German cities, as the place with the most non-confessional residents. Moreover, the city on the Saale River ranks among those larger German cities with the fewest Muslims.  In the light of empiricism and given these circumstances, one might reliably expect resistance to this experimental approach to faith, knowledge and fear to be quite limited. From a rational viewpoint, there is nothing to be afraid of.

In this context, Halle’s visual emblem is noteworthy: a city coat of arms composed somewhat bewilderingly of what appears to be a sickle moon and stars and is thus strongly reminiscent of an Islamic symbol. Yet it shows, in fact, a saltpan and two misleadingly stylised salt crystals, chosen owing to the region’s wealth of salt – although this derivation is not by any means certain. What is certain, however, is that the colours red and silver can be traced back to the Bishopric of Magdeburg and the Hanseatic League. And as – as was mentioned already – ecumenism and economics are irrevocably interwoven, one may conclude that the church does not propagate its moral values from the pulpit in the twenty-first century, but rather, as the Federal Republic’s second-largest employer, by means of its dealings with its circa 1.3 million employees. Very special rules operate here, under the loosely interpreted maxim, “Nobody can go on strike against God”.

The typographic play in the collective’s name KUNSTrePUBLIK evinces its strong interest in the public realm and hence, particular rules regarding the production of art.  Since the artists Matthias Einhoff, Philip Horst, Markus Lohmann, Harry Sachs and Daniel Seiple founded KUNSTrePUBLIK in 2006 and in particular, since they inaugurated their Sculpture Park venue in Berlin (Skulpturenpark Berlin_Zentrum), citizens have occupied a special place in the collective’s artistic projects; not least so in the course of the metropolitan opera Land’s End, which was performed in early 2010, on a freshly demarcated and enclosed Berlin building lot destined for top-end development. Instead of lovers and disappointed fools, it was investors, urban planners, citizens and activists who contended musically to acquire rights and represent interests, in a presentation of development concepts staged against a backdrop of burnt-out limousines. The real protagonists could be found in the box seats – or so one might interpret the local residents who watched the proceedings from their balconies. Residents of Halle will presumably, keep their feet on the ground while lending an ear to the words descending on them from the Red Tower. What will be their reaction? The suspense is not yet over.