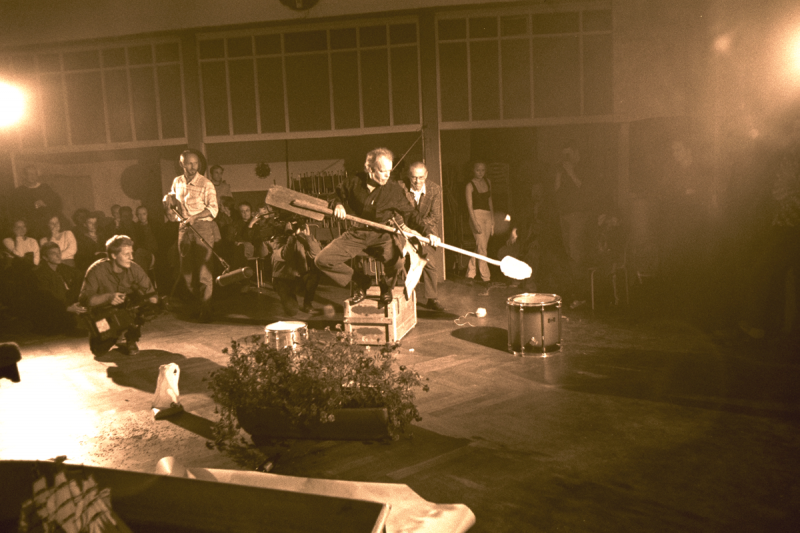 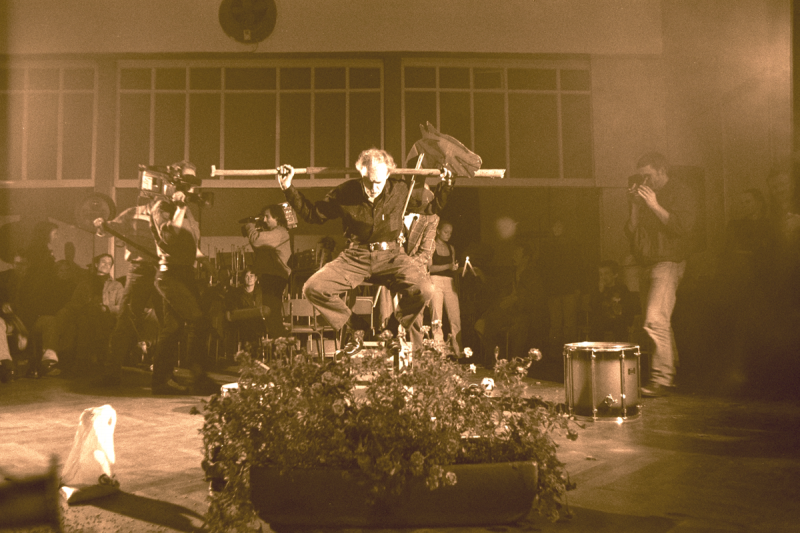 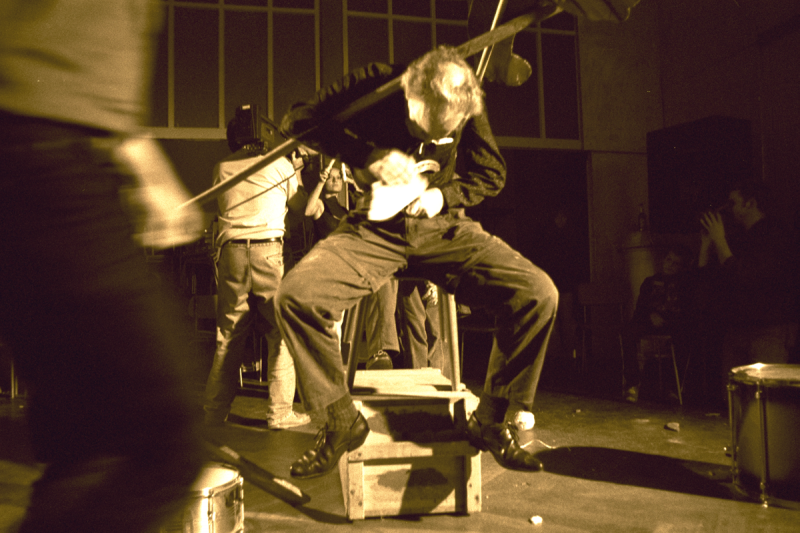 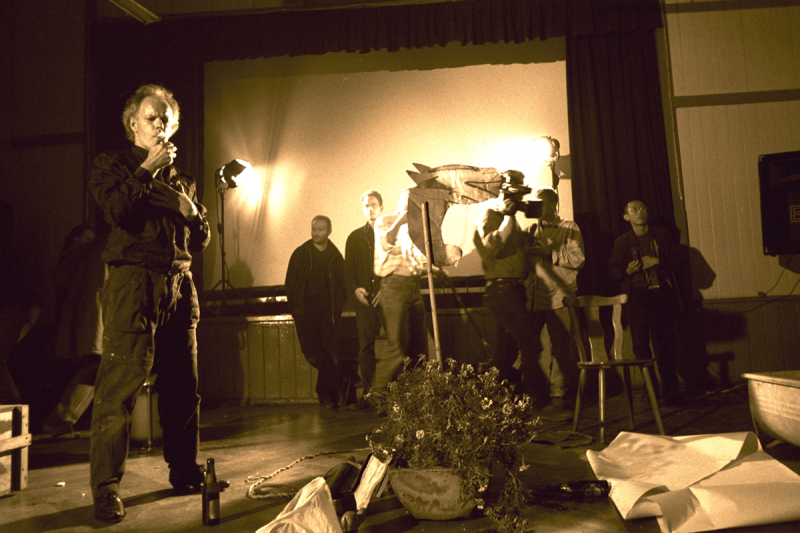 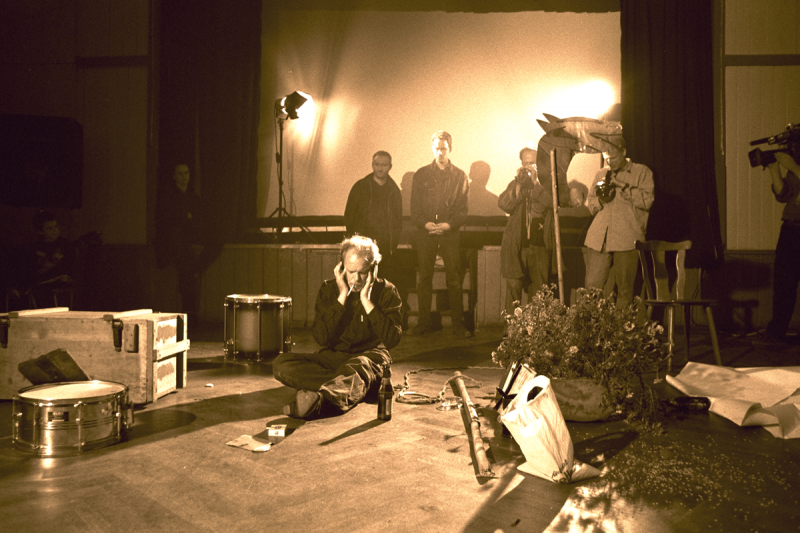 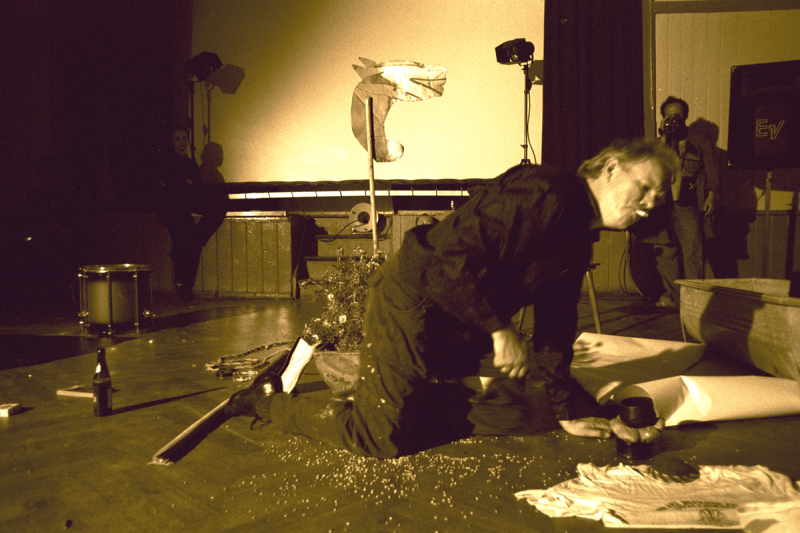 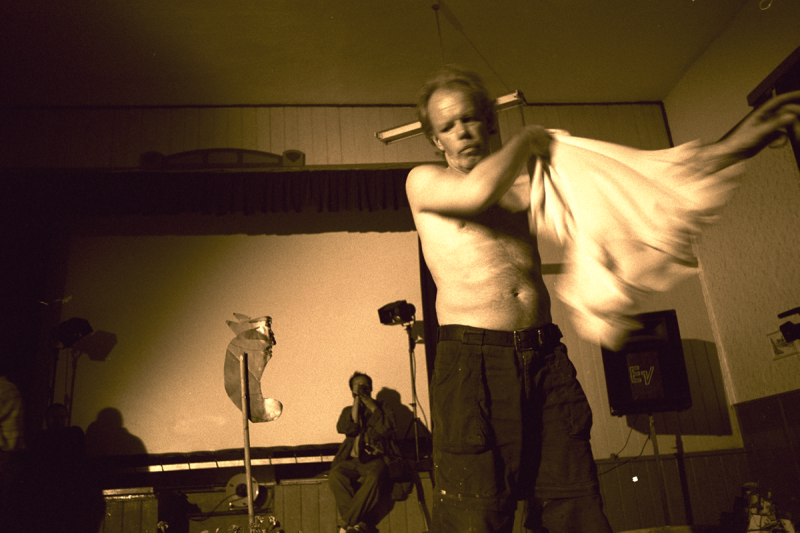 The opinions about the second performance of the evening in the hall of the „Post” pub were divided.

The main elements used by Kees Mol for the performance were set up in a row from the left to the right in front of the audience. A chair standing on a chest was attached to a post at a two meter distance with a thick rope. To the left and right of it were two drums, an oar was sitting on the chair and a self-made hobby horse.

In front of him was a horseshoe with two magnets, a trough with earth and flowers, books leaned against it, a sound bowl and other small objects. In front of it a zinc bath tub filled with water in which a model ship was sitting on stones. A roll of paper behind it. At the wall opposite of him, at a desk was Harry. The performance could start, the installation created interested expectations. The performance started, Kees Mol had himself tied to the chair, music started, the rope was attached to the balustrade, the chair was supposed to be in wobbly position, using the oar he was beating the drums so hard, left, right, left, that the oar started to break. The rope was burned with a candle so that he tipped over and fell.

Not keeping the expectation, the incoherence, one break after the other. Now was it inability, was it a technique of disturbing, latent aggression, the infamy of the plot, the deception of the living plot, the unprethinkable of mental loneliness?

White doves, that did not fly, bugs, roaches and crickets crawling out of plastic bowls, Harry´s disgust. The head of the hobby horse is burning, the roll of paper is torn apart, taking off his shirt, misunderstandings with the technician, putting on a T-shirt with text on it. He is going off, coming back, throwing a book into the water, going off again, coming back again after some time. Is it over, what is all that, the whole process an image of the pitiful, the remotest version of being. Takes the book back out of the water, gives it to Harry, he just reads what is in front of him, goes back out again, comes back with a suitcase, opens it, throws a couple of things in, tidying up in miniature, locking the suitcase again, leaving.

The audience always reacts with disturbance when people denounce the rites of art to enter a „freedom” which is in-considerate.

The image of having-to-bear, that would have been it. That also has to be denounced.

Those are the dolphins of Antonin Artaud´s alchemistic theater.