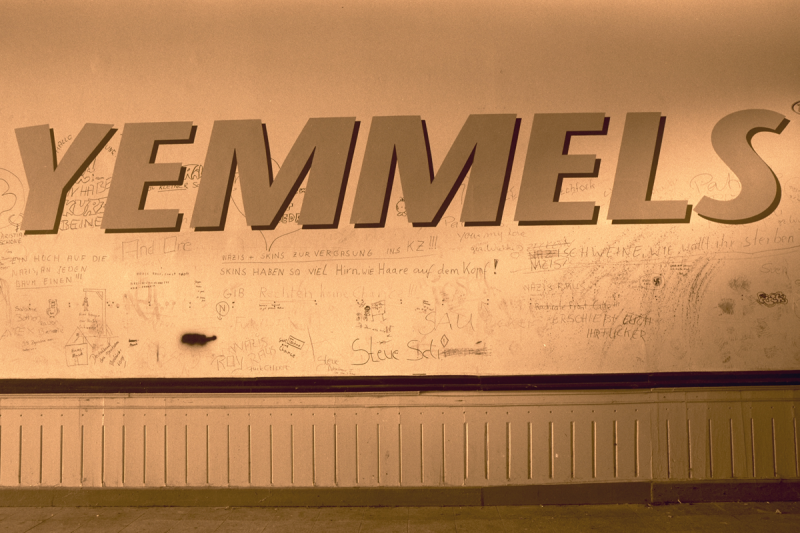 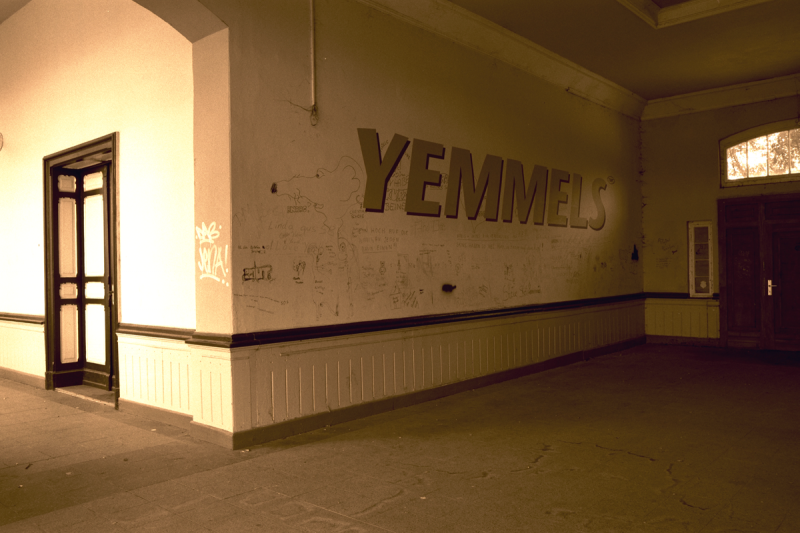 The Calbe Ost Station plays host to language-oriented works by three artists whose approach may be described as „painterly”, but which has nothing to do with painting in the usual sense.

Although the station is still operating, the building has been in disuse for years, it stands empty and most of its windows are boarded up. It is up for sale to investors. In the dusty, pastel-coloured entrance hall, where tickets used to be sold, there is evidence of the clumsy, fleeting traces of time-killing and „interim use” since its closure: scribblings, drawings, jokes, mini graffiti, messages, etc. left by teenagers with a marker pen ever at the ready in their pockets. Adib Fricke has placed his contribution to the Biennale, in the form of a six-metre-wide wall painting over these traces: In large yellow-orange letters with blue shadows beneath them, it proclaims „YEMMELS” down from the wall into the room, which thereby becomes the object named. This word, however, is one of Fricke’s meaningless protonyms which have been offered for sale (since 1994) as products of his „The Word Company”, which closely regulates the utilisation rights of these words. With its technically precise composition, „YEMMELS” does not only provide an ice-cold contrast to the deserted atmosphere of the station: As a deafeningly silent and anonymous proclamation, somewhere between product placement and slogan, it counteracts the narrative and personal graffiti and, as a title or label, throws the space out of kilter from the inside out. We may also read „YEMMELS” as a empty promise, as an invasion of the market economy into a ruin of the deconstruction of the East. With its newness and lack of function, this foreign body reduces the messages and traces of earlier use to a mere background, or even a playground through which it spreads. „Perhaps there can never be giving without taking” reads one of the messages scribbled on the wall, which awakened Adib Fricke’s interest the first time he visited the place.