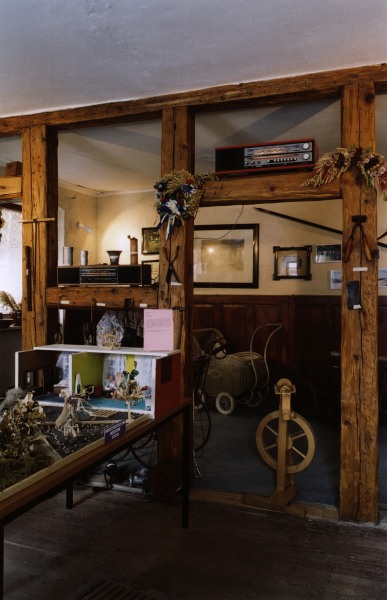 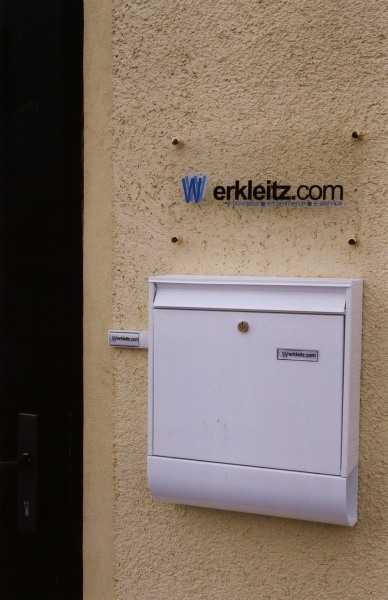 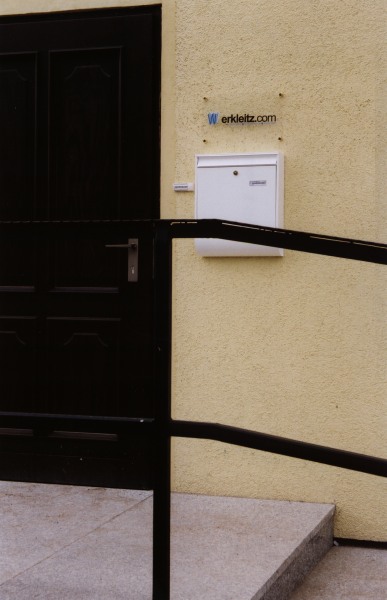 Almost seamlessly the two radios installed blended in with the small collection in the HEIMATSTUBE of the local museum, exhibiting items of daily use, photographs and documents from the turn of the century to the sixties, all of which were personal loans by residents of the two villages. A strange shift in temporal sensation happened: werkleitz.com, a project envisioned for the near future, transported the museum, with its atmosphere of days past, into the present, and at the same time appeared to be part of a past which had never actually existed. A small group of authors, all with the shared background of the Inter-Radio-Collective convex tv. had joined forces for the Werkleitz Biennale, under the name of werkleitz. com. They were inspired by the small town Halfway in Oregon, which, on the advise of a marketing company, had officially adopted the name of half. com. The plans of a young start-up internet company to settle in the rural surroundings of Tornitz and Werkleitz and to supply the villages with their own commercial internet-portal were presented as a radio feature, transmitted in the museum as well as on the website werkleitz. com. The radiofeature was comprised of a variety of informa- tion on the developments on the New Market, interviews with politicians, conversations with
venture-capitalists and local opinion, in addition to reporting on the specific werkleitz.com project. The audio-stream, announcing future activities, was the only content of the website, along with the usual “under construction” symbol.

A company logo and a mailbox at the entrance of the new townhall in Tornitz called attention to the werkleitz.com company’s location. The decision to use the town hall as an official address, as well as nonchalantly taking over the local museum, recalls the spreading usurpation of formerly public functions and services by private enterprises, in areas such as the marketing of a site, a community, or services centered on care-giving and communication.

Shortly after the opening, a fake e-mail news service, supposedly specialised on news on the developments on the New Market, spread the rumour that the young entrepreneurs had failed to raise the additional funds necessary for launching of werkleitz. com.

“werkleitz.com” out of business - DotCom Series of bankruptcies has reached Germany

Operating from Tornitz, they wanted nothing less than to set up the largest portal on the European market, but now they re faced with the end: werkleitz.com, one of the most hopeful German e-commerce up-starts. These young entrepreneurs amazed everybody with their smart idea of providing a small community in Saxony-Anhalt with its own large commercial portal: The slogan of the “Global Village” was to become reality here, an area  with a skyrocketing unemployment rate was to be turned into a Garden of Eden within the international competition. And now, the untimely bankruptcy of the enterprise - is it a sign of Germany’s decreasing ability to  compete in the New market? Does this end herald a series of upcoming crashes in the business? A symptom of a further decline of the New market? Are the pockets of the venture capitalists glued shut?

Lots of crucial questions for young companies in the internet business, as dependent as they are on their financial supporters‘whims. But are these donors still willing to take high risks, even if the idea is brilliant and the business-plan is sound? The latest stock-market news have dampened the euphorical expectations of market analysts and investors. Rumours of the” limits of growth” have been heard more, even by some of the very protagonists of the New E-conomy. The exchange rates of many internet companies have plummeted by up to 90%. The boom seems to be a thing of the past. The big players among the internet community are still turning around increasing volumes, but are not making it out of the red numbers. The expectation is for many small internet companies to go broke within a short period of time, just as werkleitz.com did.

A matter of fact - for a period of time it was true: e-commerce was one of the emerging businesses in Germany. The net is an appropriate medium for selling all sorts of commodities. But it is not always possible to find  investors to support a good business concept, and who have the stamina to help such a fledgeling business along. Grab the money and run, seems to be the new motto on the floor.

For the longest time it was accepted as a fact, just as certain as the Pope’s being catholic, that youngsters, who yest”werkleitz.com” out of business - DotCom Series of bankruptcies has reached Germanyerday spent their leisure hours in the net, tomorrow could turn into young business tycoons. But the  present slump does not only affect the big-shots, the Big and Global Players. Also the business-ideas which were expected to push the hot-spots of the net out of the centers and towards the periphery are facing more and more difficulties.

The dream’s over: werkleitz.com’s failure is the end of a grand vision, which carried the hopes for the area of Saxony-Anhalt. Just before the company was to go up for the stock market, the emergency brake had to be  pulled, after it had turned out that the funds expected for the introduction of the ambititious DotCom appearance of the village Werkleitz could not be made available here in Saxony-Anhalt. Werkleitz.com had to close  down at the beginning of July. Instead of just brokering a variety of services , the plan was to bring the village itself to the net. The dream of creating a virtual media-village ,- an actual Global village with e-commerce and  everything connected to that, this dream has gone down the drain. The intention was to provide every local service-provider, all the way from metalworks and gastronomy to animal husbandry, with an individual little  three-dimensional house. 300 providers and customers were interested in this idea. Right were the LPG (Agricultural Production Cooperative) “Neuland” had cultivated the fields, a commercial portal was to be erected,  linking the entire community, residents, social clubs and enterprises, in short: the village’s life, up with global economic cycles.

But it was not meant to be. This new boom of start-ups is very much different from the pioneering days of business in the “Wirtschaftswunder” of the fifties and sixties in the Old States. ” A multi-media company does not  function along the rules of a traditional production company, where the Master first buys a machine, pays it off, and only then considers to hire an assistant”, says Sigrid Kreis of the Multimedia Support center in nearby Calbe. What is really crucial in the so-called New Economy is speed and an impressive first appearance. Humble pie was not the dish of the day.

Facing the business, even the marketing ploy of inviting start-up companies from Berlin, Magdeburg and Leipzig to Werkleitz for a match-making event did not have the desired effect of drawing the attention of venture  capitalists. And then they hesitated a minute too long. At some point the funds were used up. The running costs depleted the bank-loan, the venture capitalists withdrew their investments. Finally, last July, desaster struck:  Instead of increasing a loan as promised, the bank froze the business account because the line of credit was exhausted. Werkleitz.com tried to re-negotiate, - but in vain.

Not only are 300 residents of Tornitz denied a start in the virtual world of electronic commerce and can now be considered electronically homeless, but quite a few jobs in the already partly renovated Tornitz office of the young start-up company are lost. At the site where one of the largest internet presences of all times was to be created, the only reminder is a sign saying “Under construction”.

The work werkleitz.com was awarded the multimedia prize of the state capital Stuttgart in January 2001; the first radio broadcast took place on 21 May 2001 on DeutschlandRadio Berlin.