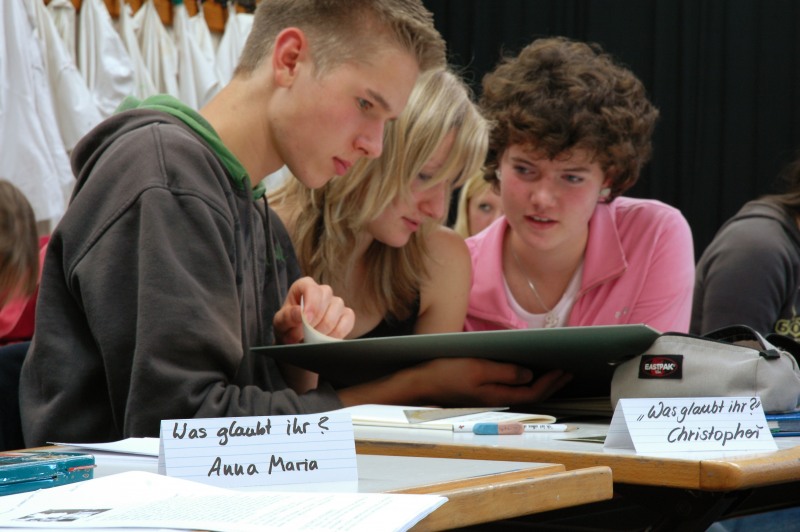 But what can come after a social change that is characterized by the failure of a (final) utopia? Can there still be something like a collective belief, a communal vision of the future, or is only a retreat to the joys of the private sphere still significant? And, if we can still speak of a continuance of ideas and convictions, this question follows: In the era of post-communism, what do we believe in?
The Halle artist Daniel Hermann has students at a cooperative comprehensive school asked each other: what do you believe in? They are young people who were untouched by the ideological experiments of the former GDR, but not by their consequences. East Germany is one of the three countries of the former Eastern block that has the most atheists (in absolute numbers), where a high percentage of citizens holds on to the materialist worldview, and where the knowledge about the Christian religion is full of gaps, especially among the young.
The sixteen-year-olds grew up under the brand-heaven of consumerist capitalism, that is to say, in a utopia-free age. Where the search for a community and happiness is fulfilled by the promises of marketing and advertising in the sense of “We Are Replay” by the jeans label of the same name, and less in institutionalised fantasy worlds like “we are pope.”
Conversations in workshops and in a project week about their own yearnings, role models, and goals were supposed to find form in the attempt of a (voluntary) declaration of faith in the format of a shrine or a poesiealbum [an autograph album with verse or sayings contributed by friends]. Daniel Herrmann explains: ”The shrine – the ark, the portatile (a kind of mobile altar, often taken along to the crusades) contains forms of relicts or votive gifts or figures of saints. The modern version of this are objects and mis-en-scènes in the private sphere. It can be an overstuffed beauty-case, perhaps filled with golden soap balls from Douglas, rare pills as party trophies, Mediterranean shells, and a friend’s lock. Or it is a rucksack full of buttons and a Diddl mouse. A further example is the mirror with a lipstick homage, pictures of boyfriend or of friends, or concert tickets attached to it. In Perfect Childhood Larry Clark said everything there is to say about the significant underside of a skateboard.
The poesiealbum contains pictures and icons, wishes and dedications. More modern declarations usually contain pointers to preferences (food, songs, animals, stars) of those writing in the album. Sometimes the pages are preformatted with questions like, for example: “Which actor do you like?” or “Where do you like going best?” With stickers of glittery hearts and magazine pictures, the pop star can be individually highlighted.” Removed from the discourses of cultural criticism or religious studies, the point of departure of Was glaubt Ihr are questions about everyday needs. But what ideas and visions does the new generation have that goes beyond emotional ties and social affiliation within the private sphere of family and friends?