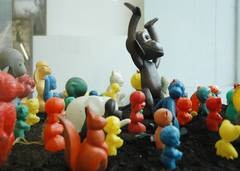 The convincing is what’s possible. What’s impossible is what convinces – Kurt Helm

Thanks to the tireless efforts of art detective Ramon Haze we are able to present the installation “Waiting for Extinction” by the artist Kurt Helm at the exhibition ZOO Natur. Helm, who lived in Saxony since 1997, created countless figure groups until his death in 2037, arranging them during his lifetime exclusively in his studio in a Leipzig factory. Understood by Helm as “political allegories”, only a few of the installations are still extant today. In the mid 21st century, Helm decided to dissolve his collection of over 40 years, having it auctioned off in as many single parcels as possible. At this point the greater part of Helm’s collection of fantastic creatures and extinct animals was lost. The art detective Ramon Haze has been working since then on a reconstruction of Helm’s work and has been able thus far to reconstitute the installations “Disturbance”, “Democratic Spiral”, “Seducer and Seduced”, “Hypnosis of the Masses by the Technocratic Monkey” and others.
“Waiting for Extinction”, the figure group shown here, is regarded as one of Helm’s first animal groups from 1997. Only recently was the work reconstructed by Haze and his co-workers and shown to the public for the first time. Holmer Feldmann, Haze’s intimate confidant and collaborator has been charged with the task of correctly presenting the group. He is responsible for reconstructing the installation and adapting it formally to the exhibition space in correspondence to the original. The present exhibition takes recourse to the presentation form of the glass cabinet, which allows the visitors to get especially close up to Helm’s figures and so discover the subtlety of their facial expressions. Haze, an expert on Helm’s work, describes their most distinguishing feature as the “ambivalent facial expression alternating between an apathetic appeal for pity and demonstrative friendliness”*. Kurt Helm’s figure groups, to which he gave the collective title of “The Great State Circus”, are still regarded today as seminal for politically motivated art in the 21st century.