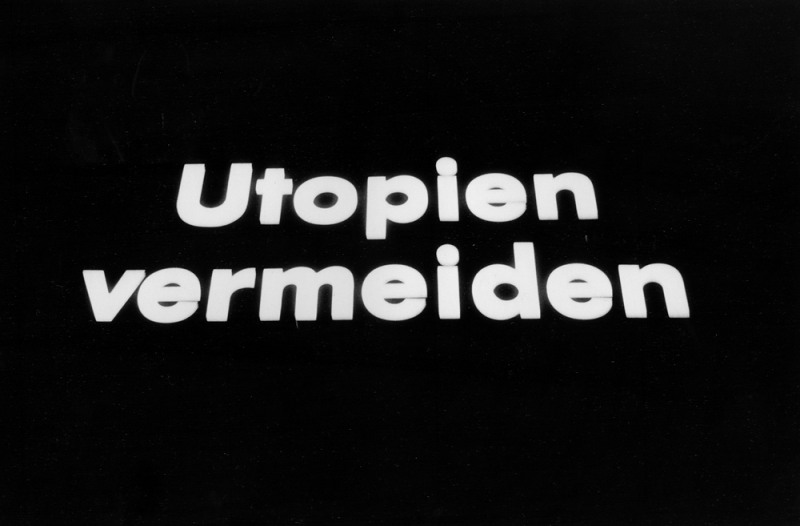 Utopien vermeiden (Avoiding Utopias) is a work by Martin Conrath (who later became co-founder and -leader of the Werkleitz Biennale) which was presented in 1993 at the first Werkleitz event Tapetenwechsel. The neon letters were planned to emblazon an skew-whiff shed. The work expresses deep scepticism towards society visions in an allround euphoric era and demands a feasible concept for the future which has never been sketched out so far.

An Interview between the artist Martin Conrath, author of the piece Utopien vermeiden (1991/92), and Daniel Herrmann, artistic director of the Werkleitz Festival 2013.

Daniel Herrmann: Your neon light text Utopien vermeiden reads like an imperative. But because there is no punctuation I can also read it as an exclamation or even a question. How do you read Utopien vermeiden today?

Martin Conrath: I never saw the phrase as an appeal, rather as a proposition that requires demonstration. For me, artworks are experimental arrangements that first come to life when they are used and evaluated. I made Utopien vermeiden at the time this attitude of mine to art and society was developing. And the attitude has not changed since then.

DH: The term “utopia” is value-neutral. In contrast, the terms “dystopia” and “eutopia” have clear value connotations. Which utopia do you mean?

MC: Normative models of the future seem to me all questionable, regardless of value. The reason being that the basis of such prognoses is neither clearly determinable nor can it be continued forward. This opens the door to all manner of manipulations. Marion1 and I spent ten years up to 2009 studying election campaign slogans from German political parties since 1945. The utopian potential of their promises is tiny and the rest is ridiculous enough from the point of view of history.

DH: The piece was made in the early 1990s. The cold war had ended. Rio Reiser’s song Aschermittwoch [Ash Wednesday] was for many a hymn to the hangover after the German reunification. On the international level there was talk of the end of history.
The Two-plus-Four Treaty seems at least in retrospect to prefigure the eastward expansion of the EU. A process that has been criticised as usurpation. In summer 1990, at the end of the World Cup, flag waving Germans drove through our cities in automobile convoys. A year later, people were demonstrating against the Gulf War. Here at the latest a new global conflict became apparent.

Utopien vermeiden can be interpreted as a recommendation for the situation of the 1990s I just sketched. Does your work have anything to do with all this?

MC: Yes, definitely. Marion and I had been in touch with artists in East Berlin and Dresden since 1986. We visited colleagues and had intense political discussions. Utopias, their practicability, and fog machine dramaturgy in political arguments played an important part in these discussions. In late summer of 1990 – in the territory of the former GDR you could still use the old currency - we were on the island of Rügen and observed how something like market economy moved into the old GDR shops. The accompanying take-over, piss-take, and ruthlessness on the part of strategists and business middlemen from the West brought about in me a pragmatic catharsis of the concept of utopia: What can be practically achieved given the situation? The advent of globalisation did nothing to soften this critical posture.

DH: Can you justify the recommendation to avoid Utopias, at least from the point of view of the past.

MC: Let’s say you run the thought experiment of a justifiable utopia through to the point where a functioning social, political, and economic system becomes recognisable. Then you would need to create a so all-encompassing framework of rules that the concept of utopia would inevitably get lost. Pragmatism is then more appropriate.

DH: At Werkleitz in 1993 the neon text was affixed to the wall. The village had certainly never seen a neon sign before. But there may have been a text invoking us to work hard for socialism on one of the barn walls. In the Stadthalle in Kehl you draped the text over a couch between two house plants. The arrangement had the look of the reception hall in a big concern. Is avoid utopias a militant slogan or a soft one?

MC: The neon sign was first shown in the Galerie Waltraud Zimmermann in Breisach am Rhein (24. May–5. July 1992). So it was initially in the commercial art domain, where it mostly met with discontent and people shaking their heads; no-one expected so much realism in art, which was supposed to be in pursuit of lofty ideals. In 1993 in Werkleitz, when people saw the piece, there was already a certain amount to titter at because in the state of desolation reigning in the public buildings belonging to the small district the main topic was saving and budget balancing. At the opening the Ostelbisches Kammerorchester (I think it was them) played. They marched in line to the barn across the completely flooded brick factory courtyard, walking over boards, wearing tails and evening dress; utopias were nowhere to be seen. So to avoid utopias is neither militant nor careful; it is simply the clean way to examine models and experiments. I don’t believe that democracy is a value in itself but in order to check its potential for entropy it seems to be expedient to resist conventions rather than make projects for the future. The future cannot be planned long term and in the middle term can only be the result of social consensus.

DH: The phrase attributed to Carl Sandburg, “Sometime they’ll give a war and nobody will come”, describes a paradoxical situation. Even the banal phrase “today I’m just going to do nothing” evokes scenarios that reveal the contrary. If I read Utopien vermeiden as an instruction to act, i. e. do x so that y follows, then I discover a paradox.
Can we at all avoid utopias?

MC: That’s true. Utopien vermeiden appears constructively as the biggest utopia of all. Utopias spring up in droves again and again; unspoken or just sketched. The slyness of Martin Kippenberger as he said „Think today, finished tomorrow”, consists not in the utopian prospect of not doing anything but rather in what follows from that: think today and think tomorrow as well.