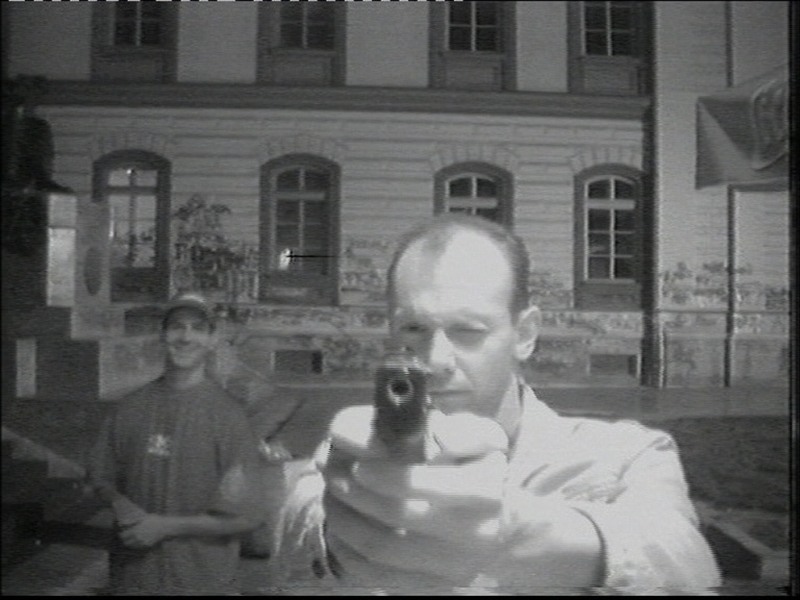 The programme encompasses five videos, in which the roles of the viewer, the participant, the artist (director) and performer are interlaced. The only video that stands out from the described role allocation, stands at the very beginning of the block as an introduction into the block’s content. The video “Untitled” (Hacer Kiroglu, 2007)  shows the artist who starts to brush her teeth and continues in a very painful process in which she brushes her cheeks and her whole face. The complete scene seems as a speech act without speech itself, as a painful and hard-to-watch speech, which has been taken away. And in this manner the question of the possibility of speech is opened, especially in relation to art-as-institution and art-institution.

The video “Duality” (Jiri Janda, 1999) pursues a painful-to-watch atmosphere. We see the documentation of an artistic act in the 1990s, in which the artist cuts a female sculpture into two pieces with a rasp. The audience in the video, as well as ourselves as audience, is confused, if this act represents an act of destruction of an artwork or if it is an artwork itself. Furthermore it questions the expected behaviour within and in relation to art-as-institution and the possibilities of making statements within it.
The video “Cultural Guide” (Deborah Ghisu, 2009) further explores the conventions of art-as-institution and art-institution(s), while it brings discomfort to our own position as viewers at the same time.

In “Escalating Perception/The Gaze” (Christian Niccoli, 2004) we are pulled out of our comfortable positions in the cinema seats to an escalator, parallel to another one, on which performers are walking in the video. The seemingly disinterested passers-by all at once start to confront us with statements which resemble information from lonely hearts ads. They make us think about the position of an individual in the institutionalized and stereotyped roles in a relationship, marriage, etc.
In Zoran Todorovic’s “Noise” passers-by on the street, residents of a mental institution and prison inmates are given the opportunity to speak. They speak to the artist himself and to the audience (us), instead of vice versa. Their stories reveal the deep human and political drama of Serbia in the 1990s.