There are Pictures, because there are Walls – A Prologue 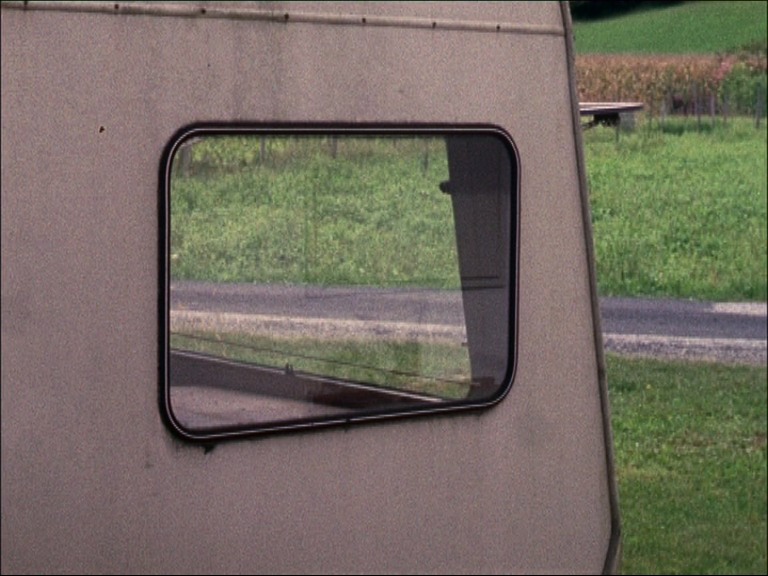 Eye and camera sweep a trailer home that is being disassembled piece by piece, thus making it ever more permeable. While the eye and camera move along surfaces, objects, and views, we hear a voice (that of Sasha Pirker), speaking about bed, doors, walls, a room, that is “entirely superfluous,” movement, and standstill. Basically, various types of spaces* are described—from a bed(room) as the only inalienable individual space, through to functionless space that “is good for nothing,” and which “does not have to refer to anything.”
In various sequences, one can observe how the sculptor Christian Ruschitzka and his assistants carefully carry away the mobile home layer for layer and the artist then re-layers the individual elements, quasi compacting them to objects. The form of compacting, for its part, refers to a die for bricks, with which the artist’s studio was originally built. This literal dismantling of the trailer home, its sculptural transformation and the spoken texts invite a contemplation of housing and homelessness, use and usefulness. Space is dissected three times over—cinematically, linguistically, and at the hands of the artist, but nonetheless withdraws to the same extent from language, cinematic recording, and physical embodiment. The approach to space by Pirker corresponds entirely with George Perec’s, from whom the text passages originate. Perec assumes that space never belongs to a person, can never be given to them. One has to (steadily) appropriate it. In this sense, Pirker’s film can only be a prologue for the continued appropriation of the space, knowing full well that it will always slip out of one’s hands.
(Barbara Steiner)

* The text passages are taken from the book Espèces d’espaces, 1974* by Georges Perec. The book was published in German as Träume von Räumen, and in English as Species of Spaces and Other Pieces.
Translation: Lisa Rosenblatt