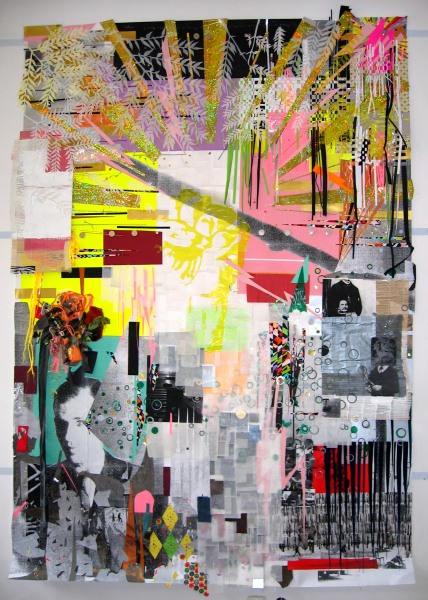 The Danish artist Kirstine Roepstorff is developing a new collage project for the Werkleitz Biennale, which focuses on the question of how inner universes fit into, and emerge out of other (outer) universes, and on how to contain the presence of the infinite and the unknown, or just an extra old or new worldview. She frames this topic in the notions “the potter’s mind” and “the inner sound that kills the outer”.

There has always been an element of fantasy in Kristine Roepstorff’s work, which in the last five years has consisted in developing an ever-expanding universe through the medium of collage. Each collage generates its own temporary narrative made from manifold layers of newspaper, magazine and paper cutouts sculpted in Roepstorff’s original style of ‘appropri-arranging’. Her collaged universe operates according to an unpredictable energy, where gravity is replaced by magical attractions, implosions and explosions on the side of content and images.

“I’m working with the symbolic, with disorder and imbalance and I’m using pictures representing a given reality to assist me in that matter. (…) For the most part I work thematically in series focusing on single issues. Like the series of Mystique Harbour, which explores the wind, the waves and the fog of modern capitalism (…). One of the recent bodies of work A Handful of Once concerned the interrelation of presence and absence. How absence to a great extent can be more present than presence.”7

The notion of The Inner Sound That Kills the Outer forms a continuation of ideas from her latest series of collages, One Hand, which appears, for example, in the panel If Balance Stops and Asks Why, Balance Will Die (2006) and in the image The Infinite and the Unknown (2006). The latter features the reappearing character ‘Stop Woman’, who signals ‘time out’ in different situations, and has in her stomach an infinite space of universes in the universe. Both images have ideas parallel to the Kabbalistic theory of creation, in which God ‘contracts’ his essence in order to create space for another conceptual, independent world.