The Futurist Manifesto, an opera digitale Back From The Future 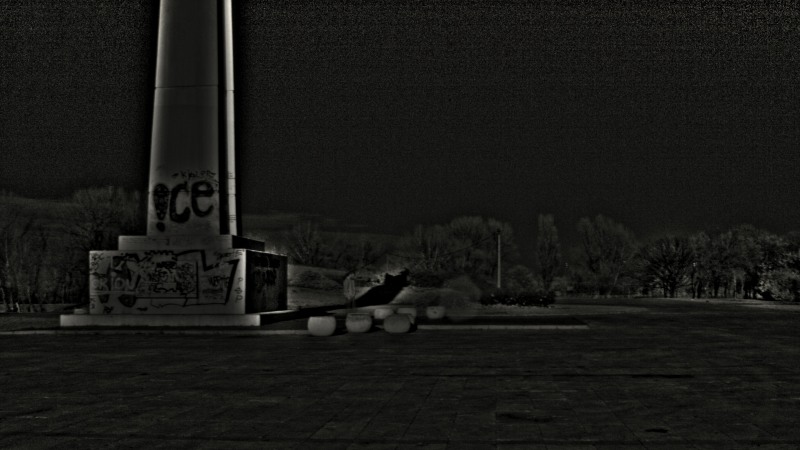 THOMAS KÖNER, The Futurist Manifesto, an opera digitale
Back From The Future

‘I walk amongst men as the fragments of the future: that future which I contemplate.’
Friedrich Nietzsche, Thus Spoke Zarathustra. A Book for All and None

The last sound has faded away. Splinters have fallen to the floor as if in slow motion and the dust has settled. Stifling space. Silence. The absence of light. Images of explosions, before the inner eye. Slow floating – in zero gravity. Darkness. The absence of movement: immobility like the zenith of a flight path. The stars in heaven that Marinetti himself implored. Then – a barely perceptible plummet into layers of sonic sediment. And a look back at once awe-inspiring cities, now razed to the ground.

A voice speaks in feverish sleeplessness. A ghostly voice articulated by a human medium. The female voice sounds metallic; is alternately that of a human being then of a creature from outer space. The voice appears to belong to the Futurist Filippo Tommaso Marinetti. He is repeating vaguely remembered snatches of ‘The Futurist Manifesto’ published in Le Figaro, in 1909. Exactly one hundred years later, the words return seemingly in a delirium of fever, to unfold in sinister manner as a retrospective reappraisal of the world: ‘The beauty of speed / Aggressive action / A feverish insomnia / The mortal leap / Great crowds / Gay incendiaries with charred fingers! / Set fire to the library shelves! / Time and Space died yesterday/ Eternal, omnipresent speed / We will glorify war / Scorn / We will destroy the museums / Our successors, will come from far away / But we won’t be there / At last they’ll find us / One winter’s night / In open country, beneath a sad roof drummed by a monotonous rain / They’ll storm around us, panting with scorn and anguish / Violence, cruelty, and injustice / Erect on the summit of the world, once again we hurl defiance to the stars!’

To this day, ‘The Futurist Manifesto’ provokes ambivalent reactions: the reason for which is probably Marinetti’s ambiguous respectively polysemous position on the phenomena he describes: Is this a case of irrepressible longing for some form of ‘purifying violence’ as in ‘war—the world’s only hygiene’; is he delivering ‘only’ a cynical, factual account of the world; or, is it indeed a premonition of the fate (two world wars, no less) that awaits the world? In the last third of the ‘Manifesto’, a sober statement is made about how – as a logical consequence of Futurist thought –present day Futurists will be destroyed by their successors, the second, even crueller generation of Futurists. This shift between unbridled desire, soberly cynical description and clear-sighted or perhaps even admonitory vision recalls Nietzsche’s ambivalent description of Zarathustra: ‘And ye also asked yourselves often: “Who is Zarathustra to us? What shall he be called by us?” And like me, did ye give yourselves questions for answers. Is he a promiser? Or a fulfiller? A conqueror? Or an inheritor? A harvest? Or a ploughshare? A physician? Or a healed one? Is he a poet? Or a genuine one? An emancipator? Or a subjugator? A good one? Or an evil one?’

In his opera digitale, The Futurist Manifesto, Thomas Köner interrogates chief Futurist Filippo Tommaso Marinetti. He questions him about the current state of the world and thereby calls the text of ‘The Futurist Manifesto’ as a crown witness, so to speak. Thomas Köner reads the ‘Manifesto’ quasi, as a description of the state of the world today, in our post-industrial era: a society that finds itself far removed from the summit from which the Futurists hurled their defiance to the stars. Everything that the ‘Manifesto’ predicted ultimately has come to pass. We Futurists have proved ourselves, today more violent, more cruel, more unjust than the preceding generations – be it with regard to human beings, the natural environment or morality. We are the very embodiment of the logical consequence of Futuristic thought: and Marinetti saw us coming.

One might join Russian cultural theorists Boris Groys and Michail Ėpštejn in saying that we – the peers of Thomas Köner and audience to his opera – are now returning from an era of radical or even militant ultra-modernism (which is to say, from all that the Futurists foresaw) to the present. This post-utopian and post-futurist return from the future implies a change in perspective: ‘In revealing the indeterminateness of meaning in the classical texts of the past, deconstruction reveals itself to be the mirror image of avant-garde constructivism, which posited rigid and absolute meanings in an as yet un-constituted future’. Deconstruction – which is at work also in Thomas Köner’s opera – regards the past as being basically undetermined, incomprehensible and polysemous: as open-ended, in short. And therefore discovers in the past potential moments of difference, of that which is resistant – in this case in Marinetti’s ‘Manifesto’.

In addition to textual sources, video is used in the opera to convey a visual impression of Marinetti’s retrospective on the twentieth century. In this medium too, the source material – here, images – is subject to conspicuous deceleration. The act of decelerating, halting, freezing a moment represents for Thomas Köner the ultimate Utopia and is of great significance also in his other work. With these (audio and visual) recording techniques he makes perceptible that which normally is not perceptible – something that Walter Benjamin in ‘A Small History of Photography’ (1931) described as ‘the optical unconscious’. This is an unconscious dimension of the material world, which in the normal run of things is filtered out by a person’s social consciousness and therefore remains invisible; yet mechanical recording techniques can be deployed to render it visible: ‘While it is common that, for example, an individual is able to offer an account of the human gait (if only in general terms), that same individual has no knowledge at all of the human posture during the fraction of a second when a person begins to take a step. Photography, with its devices of slow motion and enlargement, reveals this posture to him. He first learns of this optical unconscious through photography, just as he learns of the instinctual unconscious through psychoanalysis’. With regard to Thomas Köner’s work one might well follow Benjamin’s cue and speak of ‘the sonic unconscious’, of a Utopia of deceleration in defiance of the cult of ‘ubiquitous speed’ – which brings us back to the opening scenes of the opera. In the overture titled ‘The Gates of the Impossible’ one hears that, ‘a futuristic, colossal baton beats time to mark tempo for the orchestra: 4 bpm (beats per minute)’. A rhythm, it appears, to which we present day Futurists will have to accustom ourselves in the future.