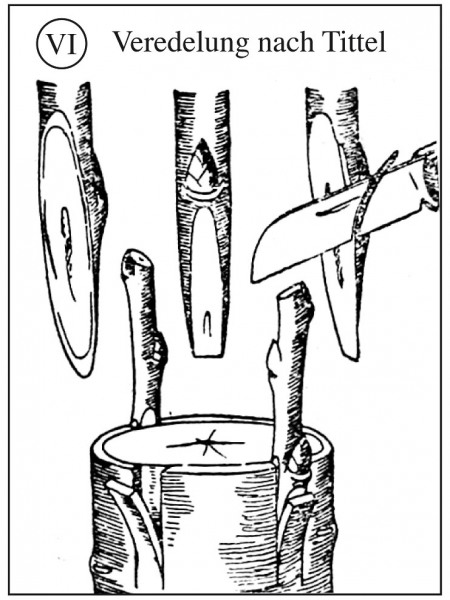 In a black market exchange on the border between Germany and the Czech Republic in Spring, Ella Ziegler (Berlin) exchanged goods for Czech scions and used these to cultivate wild seedlings in Halle into apple trees. The process of cultivating trees is always an attempt to integrate a foreign body into an in itself functioning organism. The cultivation of apple trees from Halle using Czech scions and vice versa aims to dissolve the fear of the unfamiliar, on a symbolic and practical level (in both senses of the word: the tree’s fear of the scion and the Czech fruit farmer’s fear of the citizens of Halle).

Scion Exchange describes a horticultural grafting technique, often used to optimize fruit tree stock and yield. A scion is a cutting, several centimetres in length, taken from a selected rootstock, an established variety of apple tree for example. Grafting is a traditional form of asexual plant propagation used on varieties of woody trees and typically, on fruit or rose trees. In the grafting process, the vascular cambium tissues of scions taken from selected “mother plants” fuse with those of the stock. The stock – which can comprise branches or roots – must be able to nourish the scion following fusion. In principle, this is a case of transplanting a part of one plant onto another plant. As the grafting process culminates in the reproduction of a genetic individual, it could also be described as a traditional form of cloning. Grafting fruit trees has the aim of permanently uniting an established variety with suitable stock. By combining appropriate “grafting partners” one obtains a tree that on the one hand bears the desired fruits and, on the other, meets the desired criteria regarding size, form of growth or maintenance. The result is a hybrid. In contrast to plants grown from seed (generative propagation), the genotype and characteristics of plants newly created by the grafting process (vegetative propagation) are identical to those of the mother plant. Grafting thus cannot be used to create new varieties of plant. New varieties can only be created generatively, for example by random seedlings or deliberate cultivation.

The aforementioned term “hybrid” denotes that a whole has been created from the sum of different varieties or processes. Grafting describes the combination of two systems, the complementary qualities of which facilitate the production of certain desired characteristics. Even though the combination of various sub-systems is a principle of systems, modern societies geared to economic rationalization tend to avoid such hybrid solutions. For anything hybrid demands that dual or multiple solutions be applied to the same function, which in turn demands greater administrative outlay, as each hybrid has a different internal structure.
However to guarantee their continued existence, modern social systems tend to rely on redundancy, which is to say on multiple use of the same components for the same function, or on the combination of various sub-systems. Thus, in the industrialised agricultural sector, owing to the structures of industrial marketing and types of production, biodiversity is constantly being severely limited. Traditional cultural landscapes such as were established in the nineteenth century are increasingly being sacrificed to industrial agriculture and the deployment of machinery for sowing, harvesting and processing. Ella Ziegler addresses the problematic aspects of this phenomenon in her Scion Exchange project, by establishing in a contemporary exhibition context an aspect of farming culture that has been handed down over the years. The result is a dramatic change not only in the cultural landscape but also in the cultural identity of the rural population with regard to traditional livelihoods, processing techniques and survival strategies, which are part and parcel of that landscape. The aim of industrialised agriculture is industrialised agriculture, not the traditional cultural landscape. The traditional cultural landscape invests its inhabitants with a strong sense of identity. It has a strongly social dimension that is increasingly becoming a source of fascination for people in late-modern and advanced capitalist societies.

With Scion Exchange, Ella Ziegler thus not only succeeds in creating a botanical hybrid but also points out a cultural-historical phenomenon that she parasitically makes manifest in an art exhibition, in order to address the significant links between cultural identity, cultural landscape and art. Moreover she uses both German and Czech scions and thus makes an additional, symbolic plea for cultural diversity, also in ethnic and transnational terms A prerequisite of cultural diversity is the meaningful exchange of past experience in dealing with historically established cultural techniques and resources.

Ella has spoken of her intention to take a fresh approach to traditions and to interpret the present day accordingly. She chooses to address something, the contours of which, seen in the light of late-modern cultural theory, increasingly appear to be a model of the future: the vernacular society – vernacular in the sense of a commitment to preserving local, long established cultural techniques and identities. Ziegler’s work bears comparison with the resettlement in biotopes and nature reserves of animals threatened by extinction. It is time to preserve cultural identities and techniques for the future, and to grasp their potential to become a universal key to cross-border solutions. That an art exhibition provides the framework to do so is, to my mind, especially striking.