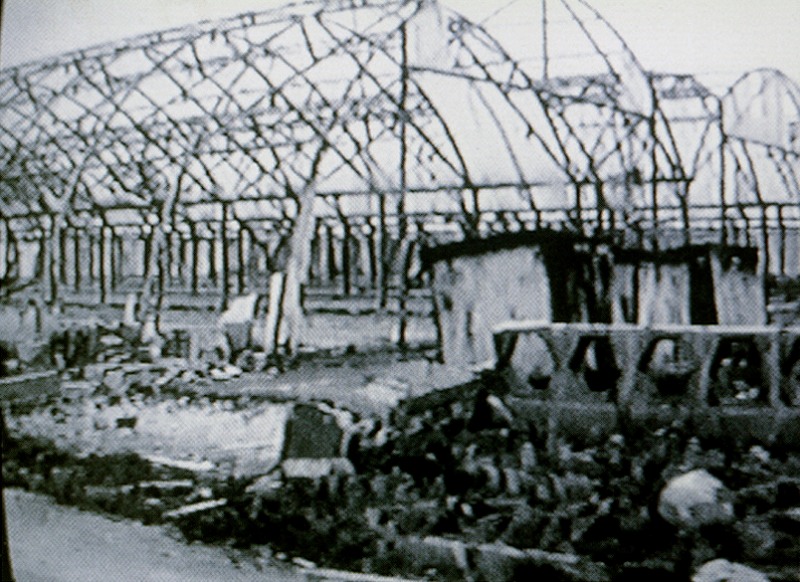 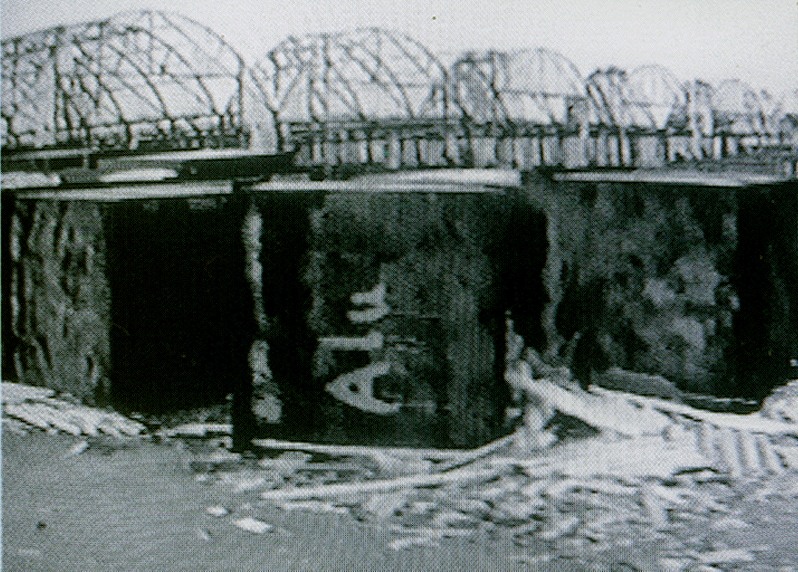 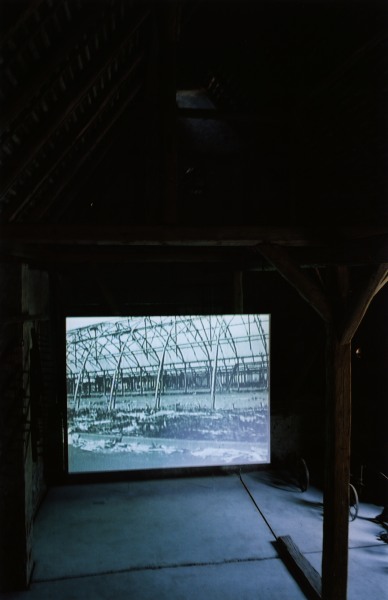 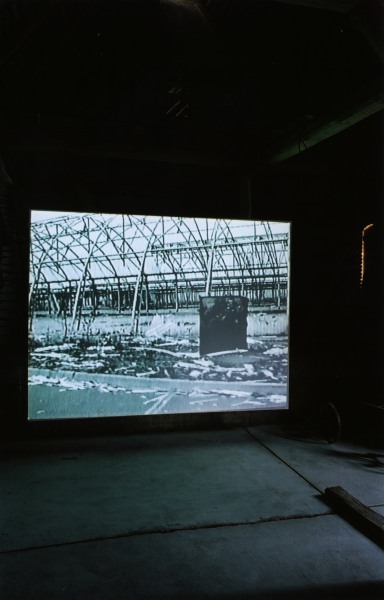 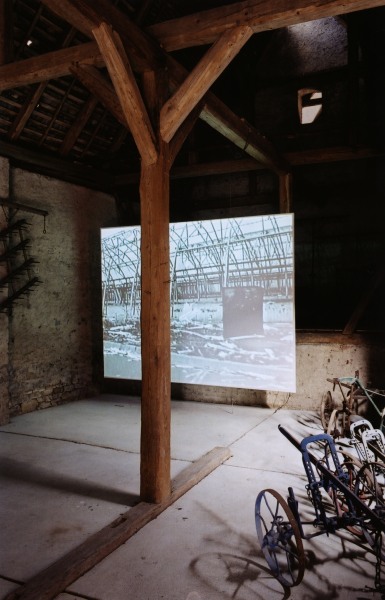 The shutdown and the dismantling of the greenhouse compound Vockerode in 1991 is but another example of the de-industrialisation of the former GDR. Together with Johanna Bartl and Olaf Wegewitz, Wieland Krause runs the collabrative project of archiving the photographic material, documents and remains of the compound. His video work generated in this context allows the viewer to register the abandoned site from the point of view of an observer.

On the tape, unspectacularly recorded in the manner of an amateur video, the object is presented as seen from a car circling around it. It conveys amazement at the sheer size of the abandoned industrial site. A plant used to produce vegetables industrially, - the green houses were heated by waste heat generated by a neighbouring power plant and the vegetables were nurtured by a solution of nutrient salts. As a ruin it exemplifies the Status Quo in the New Federal States and serves as a memorial to a model of agriculture, which had almost totally separated itself from the seasonal cycles as well as from human labor. The video work was shown as a monumental projection inside the Heimatverein’s barn, which also housed part of the collection of agricultural tools regularily there on exhibition. The video’s soundtrack reproduced the sound of glass shards shattering under tires. The installation produced an eery sense of reanimation, of a re-encounter with one of the many comparable industrial ruins in the New Federal States, the phantom pain caused by the sight of abandoned production sites, and the accompanying associations of a remaining ecological risk, destruction of employment and a farewell to an economic and societal model.

The video was accompanied by a documentation of the current state of the collaborative project. One of the greenhouses was handed over to the artists in 1997 and, accompanied by an internet database and an archive, will be re-constructed at another site. Left to itself, this remnant of an architecture of the past, will by and by shrowd itself in vegetation and will finally merge with nature.

“Greenhouse” is an art project of Johanna Bartl, Wieland Krause, Olaf Wegewitz. The cultivation of plants for human use can be counted among the most important and intelligent findings of the human mind. By skillfully exploiting the natural adaptability of organisms and plants it was possible to find a plethora of useful plants. The timespans in reference to such developments are hard to grasp in human terms. Intelligent selection and intensive observation, as well as a dosis of coincidence made it possible to speed up this process. Artificially created bioms, in which it is possible to nearly eliminate natural climatic conditions were another obvious step in the direction of shortened plant development.

Meanwhile it has turned out that natural conditions and contexts are not that easy to grasp, so that many of their aspects cannot simply be duplicated. Climatic conditions alone, as basic as they are, are the result of a multitude of mutually dependent variables and very complicated energetic transformations and to imitate them turned out to be much too demanding. Very simplified mechanisms for the factual independence of plant-growth from natural conditions where developed. This was only possible in a totally artificial environment. Nutrient solutions and special gas mixtures as well as preventive medication can keep such systems alive. The now abandoned greenhouse structure in Vockerode is an example of these facilities.

Encompassing 64 hectares, the Vockerode plant was one of the largest in Eastern Germany. The greenhouses were heated with the residual warmth of the neighbouring power plant Vockerode. The vegetables grown there were exclusively cultivated in a solution of nutrient salts, that is to say they were produced without any soil involved. The shut-down of the power-plant and the loss of the inexpensive residual heat made the greenhouses financially improfitable. In 1991, they were shut down. The final harvest, dried-up and mummyfied cucumbers, remained in the increasingly dilapidated greenhouses until February 1997. In 1997, the entire compound cleared and taken down, the greenhouses were taken apart and sold.

The zink skeleton of one of the greenhouses was passed on to the artists by the Anhalt-Zerbst District. These architectural remains of an abandoned production site, which are presently in storage, will be re-erected in the capital city of the federal state. At the new site, the “ready-made” of this metal construction will reappear, against the backdrop of the surrounding architecture and the sky, as a fragile grafic symbol with intriguing aesthetic qualities, relaying openness. and lightness. To passers-by, changing perspectives diclose a variety of communicating lines, a structure corresponding with the environment. The skeleton of the greenhouse transforms into a sculpture, symbolically reminiscent of those extreme production methods, while at the same time optically limiting space, without isolating it.

This space is declared as a “nature space” by the artists, given over to successive spontaneous plant growth, open to all the conditions of the site: the soil, the natural influences and its proximity to ,civilisation‘, including the intended and unintended desctruction of its growth. Seeds existent in the soil or brought to the site by birds, wild herbs, bushes and trees will together compose a unique biotopia, constantly transforming in synch with the natural balance. The space will be a field for observation by the artists, passers by and visitors. A path will render it accessible. The space should enable the observation and experience of nature in all of its variety, complexity and contextual interrelatedness, flora and fauna, intentionally disregarding utilitarian aspects. The result is a free space - for plants and for our minds, for thinking and re-thinking, and possibly for a re-definition of the relationship between human intention and nature.

Carefully chosen and integrated designs applying different media/material will temporarily and/or permanently open up new experiences of perception and memory. Under consideration are a solar-powered video unit with documentary material, the design of the pathway using sculptural elements corresponding with the daylight.

The development of this biotopia will be documented by the artists. This documentation will create an extension of the already existing “archive” on the former use into the future. The “archive” consists of a wealth of information on the history and the structure of the production facility, maps and drawings, bits and pieces, historical photographies and films, recorded conversations with former workers, photographic/videographic “Documents of Disappearance”, collected by the artists. This material will be stored electronically, so that it can be viewed, accessed and updated or amended (CD-rom and internet). Adaptible and expandable, as it is, it will be a point of reference, collection of material and site for the participation in the current discourse on the complex interconnectedness of economic developments, social changes, ecology, notions of nature and philosophies of life.

The publication of a book is planned.