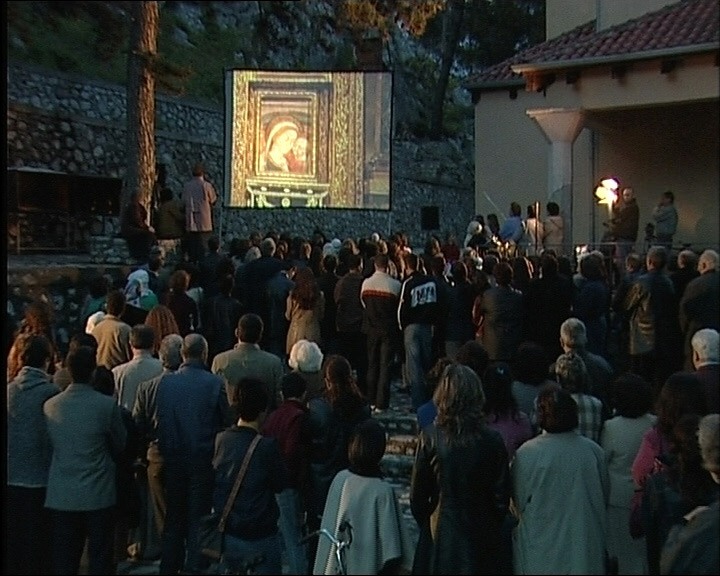 pilgrImage revolves around a small fresco of a Madonna with Child, presumably painted around the 14th century. Legend has it that the icon disappeared from its church in Shkoder in 1467, when the town was invaded by the Turks, and reappeared shortly afterward in a church in Genazzano, Italy, a town near Rome. Paci takes his cue from the legendfs stance that the icon was taken to safety by angels to free it from the impending Islamic domination. The fourteen-minute video is divided into three moments. The first is a slow unveiling of the fresco, with a zooming in to the interior of the sanctuary in Italy where the fresco rests on its altar, moving past a number of visual barriers. The second is the projection on a screen next to the frescofs first sanctuary in Shkoder of the taped documentation of the fresco in Italy, watched by a large crowd that has gathered in response to Pacifs fliers for the event. And the final moment is a solitary projection shown on a screen placed directly in front of the fresco icon back in Genazzano; the long tracking shot shows the Albanian people starring intently at the image.
Paola Morsiani

The social reality of Albania plays an important role in the work of Albanian artist Adrian Paci, who works in several media ? painting, drawing, photography, video and installation. Pacifs work deals with the ongoing manifold transitions happening since the fall of communism in 1991. He also deals with his own experiences as an immigrant now living in Italy.
Courtesy Peter Kilchmann Gallery, Zurich