Pet in the Net 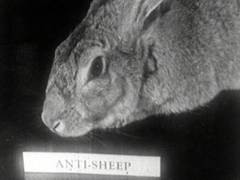 The Werkleitz festival publishes herewith its second virtual film programme. We refer to these programmes as virtual, because, in contrast to other film festivals, we do not upload films, linking instead to films already on the web. The curator has thus turned into an internet navigator, guiding through the endless archipelago of films. The first, America Forever and Everywhere, from the year 2008, is still online, despite the fact that many of the links are no longer current.

As in television, animal films are exceedingly common and popular on the Web. Not without reason did Brian Williams write of YouTube “If we’re all watching cats flushing toilets, what aren’t we reading?”.* Yet apart from the inevitable amateur videos of beloved pets and their amazing feats, there also exist truly brilliant and bizarre animal films in the Internet, 50 of which we have compiled and ordered chronologically into a virtual programme.